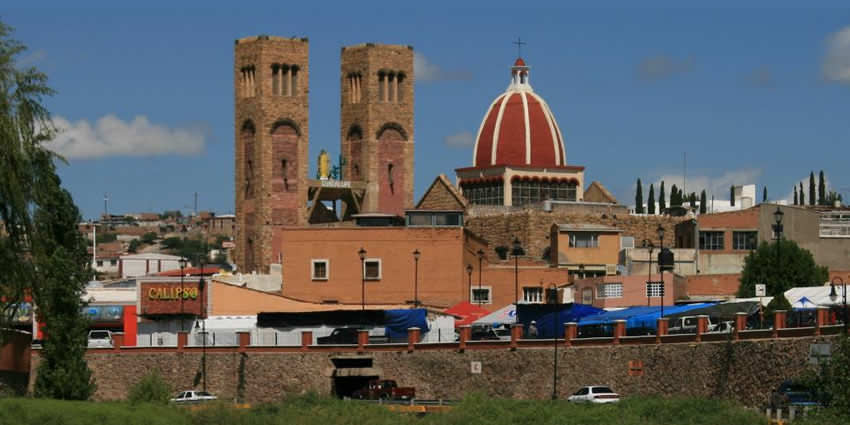 It is located in the southern part of the state, 220 kilometres (140 mi) from the state capital, the city of Chihuahua.

The municipality includes numerous very small outlying communities in addition to the city.

The city was founded as San José del Parral. The name was changed after independence from Spain, in honour of Fr Miguel Hidalgo, widely considered the “Father of the Country”.

The city is one of the most European-fashioned in all Mexico, because of the historic presence of Spaniards and French.

Parral has an altitude-moderated semi-arid climate with rainfall limited to heavy thunderstorms during the hot summer months.

During the dry season from October to May, days range from mild to hot and nights from chilly to mild. Frosts are common though not persistent in the winter.

According to legend, Juan Rangel de Biezma came here in 1629, picked up a rock on the “Cerro la Prieta” (La Prieta Hill), licked it and proclaimed “There is a mineral deposit here.” This deposit produced silver for 340 years.

Parral was once a bustling center for silver mining. As early as 1567, the silver mines at Santa Barbara were established in the territory of the Conchos Indians.

However, in 1631, a vast new silver strike was made in what is now southern Chihuahua. Later, in 1640, it was declared “Capital of the World of Silver” by monarch Philip IV of Spain, at the very height of the Spanish Empire, that included territories in Eastern Asia, Italy, and the Low Countries.

The large area of southern Chihuahua inhabited by the Tarahumara people included the highway between the mining districts of Parral, Cusihuiriachic, and Chihuahua.

Asarco managed the La Prieta mine until the boom ended in the early 1930s; the minerals that were extracted were sent to the United States for final processing and then shipped back to Mexico, the US and other markets.

After the end of the silver mining boom, Parral was almost completely abandoned in the early 1930s (although the surrounding district continues to be mined for silver and base metals.) It is now a small city mainly dedicated to commerce.

It received its first local television station in 1969, the now-defunct XHJMA-TV channel 3, and it currently has one local station, XHMH-TV channel 13.

Urban development has been slow due to the lack of potable water and its complex physical geography; its intricate network of streets and alleys are distinctive features of the city and it is these features that have helped it preserve its colonial style.

Parral is often associated with several historical figures, including Mexican revolutionary leader Pancho Villa, who was assassinated on July 20, 1923, and initially buried there, and border ruffian “Dirty” Dave Rudabaugh, a sometime friend and foe of Billy the Kid.

It belonged to one of the most prominent families in Parral, descendants of Pedro Alvarado owning the silver mine called “La Palmilla.” This family was rich enough to offer the President Porfirio Díaz to pay the national external debt. The palace was constructed by Federico Amérigo Rouvier and it is now a museum and cultural center. It has preserved much of the original European-made furniture. The walls of the patio were painted by Italian painter Antionio Decanini between 1946 and 1948.

This historical building was a gift from Don Pedro Alvarado to Pancho Villa and is located next to the Plaza Guillermo Baca.

This is where Elisa Griensen was born. She distinguished herself in Parral history by fighting against a contingent of U.S. soldiers sent to capture Pancho Villa after he crossed the border and attacked Columbus, New Mexico.

The Francisco Villa Museum is a historical building located on the street near the spot where Villa’s enemies waited days for him to pass and ultimately assassinated him in 1923. Every year in July, his death is reenacted here.

This was a beautiful and luxurious palace (during the era), with a beautiful baroque style; decorated in the facade with many beings from the Nordic mythology, that once belonged to the Stallforth family — who along with the Alvarado family, became the town’s main benefactors, contributing much to its infrastructure.

The annual staging of the Murder of Francisco Villa, a recreation using props from the era, in the exact place of the historical event.

The annual Cabalgata Villista, is a long-distance horse ride with statewide massive participation and a spectacular visual event as thousands of horses enter the city(see Cavalcade).

In addition to its diverse and rich History, Parral is famous for its traditional foods. Parral was recently named as one of the “Ten Gastronomic Marvels of Mexico,” primarily for its artisan confectioneries dulces de leche. These include a wide variety of candies and pastries from old recipes based on milk, sugar, and natural fruits. Some other notable recipes with a touch of Parral are enchiladas, rayadas, barbacoa, steaks and cabrito (goat).

Dulces de leche are cooked-milk confections found nationwide in Mexico; Parral has been historically acclaimed since the 1930s because of the distinctive flavor of its dulces de leche—candys made with nuts like pecans, peanuts, hazelnuts, and fruits such as apricot, pineapple, coconut and others. Parral’s candies have been shipped around the world; interesting destinations include Vatican City, Washington DC, and London.

These traditional confections arrived in Parral in the early 20th century. The origin of recipes is unknown, although it is believed that they arrived in southern Mexico from Europe during the colonial times. Then, these recipes were transferred to later generations.

One of the most famous confectionery artisans in Parral was Don Pablo Rodriguez, founder of La Gota de Miel. Don Pablito (as the Parralenses knew him) was born in Teocaltiche, Jalisco in the late 19th century. He and his wife arrived to Parral in the early 20th century, after working for several years in the State of Coahuila as a baker and a cook in the Hacienda del Rosario (now Parras de la Fuente) for Francisco Madero and Mercedes González (parents of President Francisco I. Madero). It is believed that their recipes might have acquired some influence from professional chefs also working in the hacienda at the time.

Enchiladas are a specialty Mexican plate also found nationwide, and Parral is traditionally famous for its delicious enchiladas. They are a rolled maize tortilla stuffed with meat and covered with a tomato and chile sauce. Enchiladas can be filled with a variety of ingredients, including meat, cheese, beans, potatoes, vegetables, or seafood.

These other tradition in Parral, started in the early 20th century and they gained notoriety in the mid-late 20th century. Enchiladas originated in Mexico. Anthropological evidence suggests that the indigenous people of the Valley of Mexico traditionally ate corn tortillas folded or rolled around small fish. Writing at the time of the Spanish conquistadors, Bernal Díaz del Castillo documented a feast enjoyed by Europeans hosted by Hernán Cortés in Coyoacán. In the 19th century, as Mexican cuisine was being memorialized, enchiladas were mentioned in the first Mexican cookbook, El cocinero mexicano (The Mexican Chef), published in 1831, and in Mariano Galvan Rivera’s Diccionario de Cocina, published in 1845. Probably, as with the dulces de leche, this recipes arrived to Parral from immigrants from the south of Mexico.

Among the most famous cookers of enchiladas in Parral was Doña Cuca, near the historical Calicanto bridge.

Barbacoa is meat from cattle or sheep slowly cooked over an open fire or, more traditionally, in a hole dug in the ground covered with maguey leaves; although the interpretation is loose, in the present day it may refers to meat steamed until tender.

During colonial and post-colonial times, Parral was famous because of its delectable barbacoa or birria de hoyo. Such barbacoa contained ingredients as laurel (bay leaf), garlic, maguey, onions, and other condiments. It was one of the luscious foods of the executives, foreigners, and miners working in the silver mines at Parral.