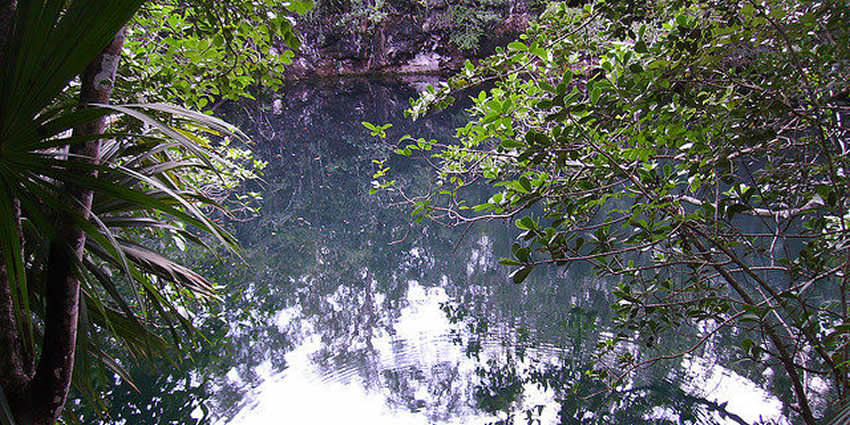 A flooded Mexican cave that hides a river beneath the water.

The last thing most scuba divers expect to find while diving is another river underwater, but that is exactly what awaits in the depths of the flooded cave known as the Angelita Cenote.

In the thick Mexican jungle just outside the ruins of the Mayan city of Tulum, a series of sinkholes and caves in the jungle lead to an amazing submerged world. One such opening is the Angelita Cenote: a wide, 200-foot deep pool that opens suddenly from the dense jungle surroundings.

The cavern was created by the crumbling of porous limestone as water crept in and hollowed out the space.

The gaping cavern was once even worshipped as a holy site by ancient Mayan cultures, hence its name “cenote” being a derivation of a Mayan word meaning “sacred well”.

In addition to the natural beauty of its lush jungle surroundings, the flooded Angelita cave has a unique quality: it seems that a separate river runs near the bottom of the water-filled pit. This illusion is a product of the water’s chemistry.

Different portions of the water in the caverns have different levels of salinity, causing the denser water to sink to the bottom where it looks like a misty underwater river all its own.

The Angelita Cenote is a popular diving spot despite its high-level of scuba difficulty due both to the remote location of the entrance and the underground nature of the dive.

However, adventurous spelunkers are rewarded with a one-of-a-kind view of an underwater “river”. Just don’t get swept away.

Know before you go

The cenote is located 17 km southwest of Tulum. Guides and transport may be arranged through tour agencies in Tulum.

How to get to Angelita Cenote