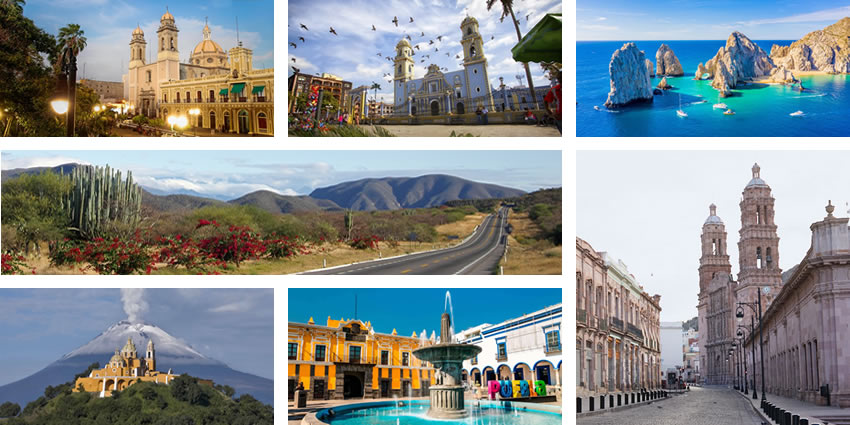 While tourist hotspots like Cancún and Tulum promise to please wanderers on the hunt for some coastal relaxation, several destinations in Mexico offer an authentic experience that can’t be found by staying on the beaten path.

Rich history, small-town charm, and unique landscapes round out this catalog of less-traveled spots in Mexico that deserve a place on that ever-growing travel bucket list.

Mexico is a massive country and one of the most popular tourist destinations in the world. But the majority of travelers stick to well-known vacation spots like Cancun, Cabo San Lucas, and the Riviera Maya.

Mexico is so much more than a resort destination, and these lesser-known, non-touristy spots.

That’s unfortunate because the nation is filled with a vast array of treasures just waiting to be discovered. If you’d like to explore some of Mexico’s less-traveled destinations, these top options will provide you with a great place to start.

Colonial Zacatecas, Mexico’s second-highest city at 2469 meters above sea level, offers a chance to take a trek back through history with stunning architecture that includes many civil and religious buildings from the colonial area.

The Cathedral dominates the center of Zacatecas City and is considered one of the most beautiful examples of Churrigueresque architecture in Mexico.

Best known as one of the clusters of old silver mining cities, Zacatecas has long been valued for its rich deposits of silver and other minerals. The city also hosts the famous Holy Week Cultural Festival which features more than 50 dancers and other performers.

Located off the coast of Baja, California, it’s a must-see, with pristine turquoise bays, windswept sand dunes, fiery red cliffs, and rich marine life as part of one of the most unspoiled ecosystems in Baja.

In the surrounding waters, view gray whales, swim with manta rays and sea lions, and on land, you’ll find five species of mammals and reptiles that are unique to the island, including a ring-tailed cat and black jackrabbit.

Chiapas is unlike anything you probably envisioned Mexico to be.

Here you’ll find a land filled with lakes and waterfalls as well as magnificent ruins in the ancient Mayan city of Palenque, nestled within a rainforest along the northern border of the state.

The incredible detail of the carvings and frescoes have revealed to archaeologists much of what they know about Mayan life today.

At nearby Agua Azul, you can take a dip in waters that appear so amazingly blue it’s hard to believe they’re real, but they’re actually the result of crystal clear water that runs over a smooth limestone riverbed, illuminated by the sun.

Puebla’s city center is also a UNESCO World Heritage site due to its magnificent monuments of Spanish colonial architecture and a colorful blend of cultures.

Stroll its central streets, passing buildings, facades, and gardens that reflect its history, and shop for intricately designed Talavera pottery. Nearby, you can view the world’s largest pyramid at Cholula, topped by a church.

After dark, head to the Plazuela de Los Sapos to enjoy the sounds of traditional mariachi.

This quiet fishing village hidden away on the Pacific coast in the state of Oaxaca has become an increasingly popular tourist destination, though it still remains a favorite budget-friendly destination in Mexico.

It’s also under the radar, with the exception of those who come here to surf. A beach break known as the Mexican Pipeline, putting Mexican surfing on the map, brings surfers from across the globe.

From May to July, waves can reach 30 feet or higher. Even if you don’t surf, the experience here is all about the beach, though you’ll also find an authentic Mexican culture and a bustling outdoor food market.

Huatulco is in one of the most bio-diverse regions of the country along the Pacific Coast, about 70 miles east of Puerto Escondido, and also in Oaxaca State.

It boasts a Green Globe Certification for sustainable tourism and features an abundance of eco-attractions and wildlife, along with nine pristine bays and 36 picturesque beaches connected by rocky cliffs that lead to lush rainforest-covered mountains.

Visit coffee plantations and explore pre-Hispanic ruins or enjoy endless snorkeling and diving among brilliant reefs – you’ll be stunned at how crystal clear the waters in Huatulco are.

This seaside village 40 minutes north of Puerto Vallarta in the state of Nayarit was a secluded surfing town and sleepy fishing village just a decade ago, but that’s changed in recent years, with travelers from across the globe discovering Sayulita’s charms.

Don’t wait too long to visit, while you can still enjoy a low-key, bohemian vibe, unspoiled beaches, and rustic seafood eateries on the sand. If you’re new to surfing, this is also a good place to learn.

While the experience will find plenty of challenges, the bay has a nice break that’s ideal for beginners, and you’ll also find lessons as well as board rentals of all types available.

Just an hour’s drive from Cabo San Lucas, Todos Santos is one of the most charming towns in Baja with its quirky mix of New Age spiritualists, surfers, artists, and fishermen.

It offers a world-class foodie scene too, though it’s managed to escape the rampant tourism of other towns in the region.

This unique, artsy desert oasis is tucked among ancient orchards of mango and palm while offering breathtaking views that overlook powdery white sands and the expanse of the dazzling Pacific.

Its rich history with centuries-old tradition and friendly hospitality combined with modern conveniences make it an ideal less-traveled destination.

Morelia is another one of Mexico’s most spectacular colonial cities, located in the state of Michoacan, home to the only indigenous people who were never conquered by the Aztecs.

The cozy and picturesque town of Morelia It’s surrounded by villages devoted to the single crafts industry, including musical instruments, textiles, furniture, copper, and pottery.

Several of the most important monarch butterfly wintering sites on the planet are located in eastern Michoacan’s mountains.

The annual monarch migration is one of the greatest spectacles found in the nation when as many as 60 million to one billion of the orange-colored butterflies journey from eastern Canada to the forests of western central Mexico.

Cooper Canyon, located in the heart of the Tarahumara Mountains, is so enormous it could swallow the entire Grand Canyon.

Copper Canyon, formed by the confluence of six rivers, is lush and green with oak, fir, pine, and fig trees. Indigenous people have made the canyons their home for centuries, and living in this remote region, their way of life has largely been preserved.

You’ll need to venture deep into the canyon floor to meet the Tarahumara people. The best way to get there is via the Chihuahua al Pacifico Train which can be boarded at El Fuerte, a small colonial town on the El Fuerte River.

It’s also been an important source of salt since pre-Hispanic times, while its two rivers and the carbonated water of La Laguna Verde, a spring that erupts from the volcanic landscape, served as a public bath for indigenous people.

During the Aztec empire, it was said to be a sacred place for chiefs who took advantage of the warm waters for their healing and soothing properties.

The town is typical of others in Mexico, with high tile roofs and cobblestone streets framed in the traditional surroundings of 16th-century buildings.

This UNESCO World Heritage site and one of central Mexico’s most picturesque and best-preserved colonial towns manages to be cosmopolitan and quaint at the same time.

With narrow cobblestone streets, stunning architecture, and idyllic weather, many feel it’s the prettiest town in the country.

Foreign retirees, artists, and writers, mainly from Canada and the U.S. are flocking here for its vibrant art scene featuring numerous studios and galleries with working artists and artisans along with a moderate cost of living.

There’s something interesting to be found around nearly every corner, with its parish church, Parroquia de San Miguel Arcángel, Jardin Park, and Mercado Ignacia Ramirez a few of the highlights.

The small state of Tlaxcala, located just two hours west of Mexico City offers something for almost everyone, including fascinating sites for history buffs and beautiful scenery for nature lovers.

At Cacaxtla, one of the most important ancient cities in central Mexico, perfectly preserved pre-Hispanic murals vividly depict battles and pyramids from the different stages of the Olmeca-Xicalanca culture.

Its compact capital is filled with colonial buildings painted in warm, colorful hues, all set in a verdant valley with soaring twin volcanoes as a backdrop.

It rivals the Yucatan for restored and ruined haciendas and is also home to over 1,000 archaeological sites. During the summer, visit the Firefly Sanctuary where you can witness countless fireflies lighting up the forest at night.

An ideal destination for wine enthusiasts, the oldest continuously operating winery in the Americas, Casa Madero, can be found in the town of Parras de la Fuente, located in Coahuila state in northern Baja California.

It was actually this very winery that exported the grapes that started the wine industry in Napa Valley, back when the Golden State was still a province of Spanish Mexico.

Its wines are still found alongside the finest in the region and among the winners of international competitions.

While the main attraction here is the vineyards, you can also visit a sacred volcano and the charming chapel, El Santo Madero, which sits atop it, keeping watch over the town.

By visiting the “cave of the bats,” located in the Hotel Antigua Hacienda de Perote, just before the sun goes down, you can see and hear thousands of bats pouring out into the sky as they get ready for a night of hunting.

La Paz was once set to become the next Acapulco – Baja’s unassuming capital remained a laid-back city with just a few tourists joining vacationing Mexicans.

But that’s starting to change, much to the dismay of some, with resorts popping up just outside of town aimed at travelers looking for luxuries that can be found in places like Cancun and Cabo.

For now, the essential nature of the city hasn’t changed.

You can still enjoy a provincial Mexico town atmosphere along with picture-postcard beaches, lively squares, and city streets nestled between coconut palms, old laurel trees, and date palms along with the ultimate seafood smorgasbord.