The history of Mexican pink, the most representative color of Mexico 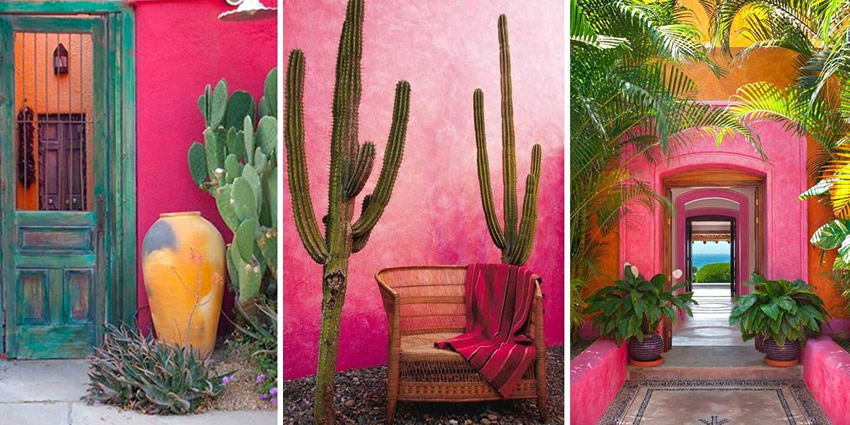 Discover how the Mexican pink gave identity and was part of architecture, art, design, and fashion in Mexico

It is difficult to reduce a country as polychromatic as Mexico to just one color. There are those who would identify the country with the green that colors its flag, jungles, and forests due to its great biodiversity.

Others, perhaps, would think of a strident red like the one that arises when using the grana cochineal, a parasite present in the nopal that was used as a pigment during the Mexica and Mayan empires, and that is still in use.

There are also vibrant colors such as yellow or orange, common when entering a market and walking through the rows of fruits or vegetables that fill these places.

Each corner of Mexico is to find a different chromatic paradigm, but if we had to choose a color that at the moment of seeing it evokes a shared experience, a symbol that makes us feel at home, for many that would be without a doubt, the Mexican pink.

Mexican pink is a color with a long tradition

Telling the story of Mexican pink is going back to the very traditions and tools of the original peoples, when the color was used both to color outfits, and to make murals and ritualistic or decorative objects, and was achieved through natural pigments.

Among them, the grana cochineal stands out, a parasite found in the nopales to which the Aztecs gave the name of nocheztli (“prickly pear blood”). This insect, when dried, was crushed to serve as a natural dye, generating a crimson red color.

Used for different purposes, the red produced by the grana cochineal, as well as the chromatic varieties that could be obtained from it, gave rise to a textile tradition where this was the prevailing color palette and is one of the most coveted tones by both native peoples and the Spaniards.

A quest to find the color of Mexico

In addition to being a legacy of the textile art with which the native peoples used to create their outfits, the history of Mexican pink cannot be explained without mentioning the artist, cartoonist, writer, filmmaker, and fashion designer Ramón Valdiosera.

Born in 1918 in the municipality of Ozuluama, the state of Veracruz, Ramón Valdiosera had an artistic training that accompanied him throughout his life. In his 80 years of work, he has worked not only creating iconic comics in Mexico but also making exhaustive trips with the aim of investigating the clothing and textile art of the native peoples.

During his travels, Valdiosera came into contact with the colors, aesthetics, forms, and reasons that each community had to wear and create their own clothing, which led him to devise a project in 1946 to create a Mexican fashion brand that recovers the most characteristic aspects of textile art that he witnessed during his travels.

Thus, in 1949, during a presentation of his fashion collection at the Waldorf-Astoria hotel in New York, Valdiosera was questioned by an interviewer about the use of bougainvillea as a chromatic axis on his catwalk.

In response, the designer pointed out that the decision to take that specific shade of pink came from its widespread use in the culture, textile tradition, and characteristic urban settings of Mexico.

Mentioning that this bougainvillea tone is present both in handmade toys, in traditional costumes of different native peoples, sweets, decorations, or homes.

Before Valdiosera’s explanation, the interviewer launched the paradigmatic phrase that today continues to articulate the name we give to this tone: So it is a Mexican Pink.

More than 70 years after that moment that gave its name to Mexican pink as we know it, the color with which Ramón Valdiosera decided to present to the world the most relevant of Mexican fashion is still in force and has become an emblem of national identity.

Currently, Mexican pink is part of the country brand of Mexico, it can be seen in the clothing and textile art of native peoples.

It is the most common color in decorations with chopped paper that are usually present in establishments and is immortalized in the architectural works by prominent architects such as Pritzker winner Luis Barragán and International Union of Architects Gold Medal winner Ricardo Legorreta.