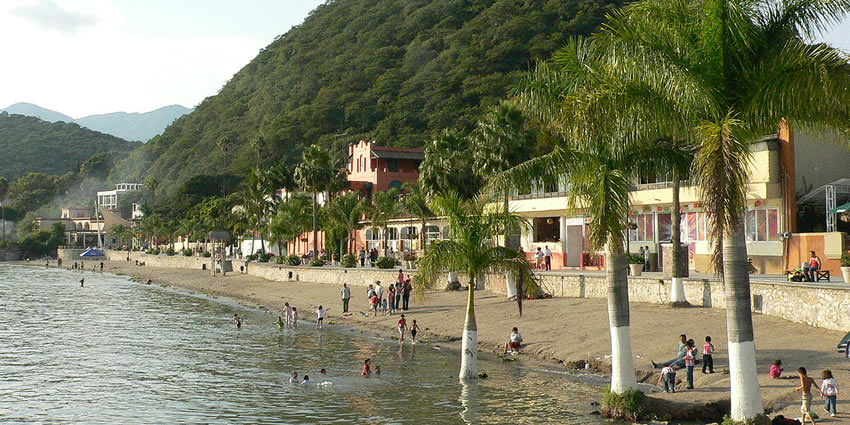 Chapala is a town and municipality in the central Mexican state of Jalisco, located on the north shore of Lake Chapala, Mexico’s largest freshwater lake. According to the 2005 census, its population is 43,345 for the municipality.

Chapala, along with its namesake lake, is well established as a weekend getaway destination primarily for inhabitants of the city of Guadalajara.

Although there are several theories as to the origin of the city’s name, the most likely is that it comes from Chapalac, the name of the last chief of the Nahuatl-speaking indigenous people of the region.

The residens of Chapala are known as “Chapalense”.

In its origins Chapala was a prehispanic settlement whose most remote antiquity is found in the XII century of our era, when a migration of tribes of Nahuatl origin (cocas) from the northwest of the country, touched these latitudes, finding the north shore of the lake. populated, as reported by Fray Antonio Tello, friar and Franciscan chronicler.

Four centuries later, in the year 1524, with the contact of the indigenous Cocas and Cazcanes with the Franciscan Fray Juan de Padilla and the Spanish soldier Alonso de Avalos, the lordship of Chapalingo was recognized as part of the New World.

The work of evangelization of the Franciscans Fray Miguel de Bolonia, Fray Martín de Jesús or de la Coruña and Fray Juan de Amolón, were built in 1531 with grass and adobes the Convent, the Hospital – in the place occupied by the chapel of Nuestra Señora del Rosario- of Axixic (Ajijic), and the church of Tlayacapán (San Antonio); in 1548 the Convent of Chapalingo (Chapala). The parishes of Chapala and Ajijic as well as the chapel of Our Lady of the Rosary were built in the eighteenth century on the occasion of the secularization of religious buildings to the Franciscans by the Archdiocese of Guadalajara.

During the sixteenth to the eighteenth centuries Chapala was a “half-hearted” encomienda with the Spanish Crown populated mostly by Indians, with European colonization appearing at the end of the seventeenth century.

During the Independence, José Encarnación Rosas, originally from Chapala, operated in this area of ​​the Lake. Roses with 200 men and aided by the forces of José Santa Ana, on November 1, 1812 he faced Jose Antonio Serrato near La Barca, whom he defeated and took away 300 rifles.

Rosas in his pro-independence ranch acted alongside the wealthy hacendado Luis Macías, known by the aborigines as “El Brigadier”, as well as with the parish priest of Ocotlán, Marcos Castellanos and the aborigine José Santa Ana, originally from Mezcala.

In this last place they held one of the bloodiest fights of the insurgency, which filled with glory the chiefs and soldiers, most of whom were Indians, whose love for the cause of liberation gave these hosts so many victories. On November 25, 1816, the capitulation was signed, which came to end one of the most glorious feats of the War of Independence.

On March 27, 1824, the title of town was granted to Chapala, in the fifth proposal of the Territorial Division of the State Plan.

Chapala became an official municipality on September 10, 1864, by decree of the Jalisco State Congress.

It is from 1885 when Chapala begins to develop as a tourist center.

In the late 1940s the American writer Tennessee Williams settled in Chapala for a while to work on a play called The Poker Night, which later became A Streetcar Named Desire. As Williams explains in his essay “The Catastrophe of Success,” Chapala offered him an ideal place to work, “a remote place among strangers where there is good swimming.”

During the First World War, in 1915, Norwegian speculators intended to make Chapala a luxury resort town. A railway was to be built, with separate carriages for black and white people. In addition to the railway, the speculators would also provide two motor vessels to trafficate the lake with connections to the other small towns at the lake shore. A first class hotel was to be built, as well as an automobile club with attached casino. An extensive dam, 8 kilometers long to provide dry land with plots for luxury dwellings. What the shareholders in the company, “Compania di Fromento di Chapala” received, was only photographs of railway carriages and locomotives. See the book; Gullfeber by Kr.Fr.Brøgger, published in Oslo 1932.

Since the 1960s, Chapala has been frequented by both Mexican and international tourists. Among the area’s cultural attractions is mariachi music, which originated in the state of Jalisco. While many fine mariachi bands have been based in Chapala, the most famous groups are based in larger cities nearby. The most famous mariachi in Mexico is Mariachi Vargas de Tecalitlán, founded in the late 19th century in the southern Jalisco city of Tecalitlán, but now based in Mexico City. Although mariachi music is believed to have originated in the town of Cocula, the greatest concentration of mariachis can be found in the city of Guadalajara, located about 30 miles north of Chapala; it is considered the city that most epitomizes the external concept of Mexico propagated by the international mass media (characterized by charros, tequila, sombreros, and mariachis). A worldwide mariachi festival is held there each fall, mariachis from throughout the world (including Europe and Asia) regularly participate.

By decree published on September 8, 1970, Villa de Chapala rises to the political category of city.

Another wave of immigration would take place in the late nineteenth century with the arrival of people from abroad who, attracted by the beauty of the riverbank and the benefits of its climate, built the first “summer” farms that little by little were transforming the landscape of this ” fishing village “as Father Orozco mentioned when he arrived at this place at the end of the 19th century.

These European-style estates built between 1878 and 1920 took a seat towards the east and west of the Parish of San Francisco de Asís on the shore and on the street that leads to the jetty contrasting its architecture with the landscape: front of the First Hotel, the “Arzapalo” (covered by the Mirador of the Beer Garden Restaurant), the Casa Braniff (now the Cazadores Restaurant), the Casa del Arq. Luis Barragán (south side of the Supermarket on Madero Avenue), the Hotel Palmera (today Hotel Nido) and the Hotel Niza (today the municipal presidency) both on Madero Avenue.

The building of the old Gonzales Gallo Railway Station, besides being considered the bulwark of the city, represents the takeoff of the Great Epoch of the Chapala Riviera. The railroad was more comfortable than the journey by mule or horse or the first stage that took up to 12 hours, or the first “Wichita” buses with hard tires that covered in 5 hours the distance the train made in only 3 hours.

Boat trips on the lake to the island of Mezcala and island of Scorpions (“Isla de los Alacranes”).

Other places located less than 2 hours away are Sayula, a town famous for the elaboration of fine knives, and Ciudad Guzmán, famous for its nut candies and enchiladas that you will find in the portals, as well as the mountain destinations of Mazamitla or Tapalpa in wooded areas.

Contact us if you want to add your business or services to our listing.