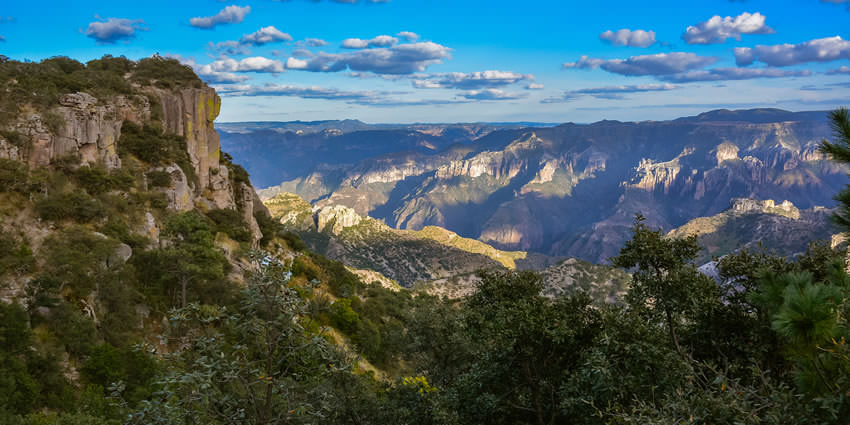 Larger and deeper than the U.S.’s Grand Canyon, Mexico’s Copper Canyon region is an eighth wonder of the world. The Copper Canyon train travel is a journey that you cannot miss.

In this spectacular region, nine major canyons – most over a mile deep – carve through the Sierra Madre Occidental mountain range.

The country’s tallest waterfalls pour into winding rivers, linking alpine forests to verdant meadows, and ancient cultures to Spanish silver mines. Home of the Tarahumara runners, the refuge of Pancho Villa, and the birthplace of Zorro, this is Copper Canyon – The Treasure of Sierra Madre.

The journey from sea level to 8,000 fear on “the most dramatic train ride in the western hemisphere” and experience Copper Canyon.

The Copper Canyon train is among the greatest engineering works constructed during the 19th and 20th centuries.

Mexican engineers demonstrated their capacity to solve location problems, as well as construction and development, due to the highly complicated geography of Copper Canyon, where the tracks would be laid.

Travel on Chepe, one of the most impressive train rides in the world. Its 653-kilometer ride crosses Copper Canyon, a series of unique canyons of the type between Chihuahua and Sinaloa.

Throughout the trip you will cross tunnels and bridges that are considered a jewel of Mexican engineering, you will see as well one of the most majestic landscapes in Mexico.

Venture into the mountains and get to know one of Mexico’s natural wonders aboard the Chihuahua-Pacífico train (Chepe). Walk-in its forests, observe its vegetation, get to know historical sites, and go deep into its towns, rich in culture and tradition.

Throughout the route, different altitudes are reached, ranging from 100 to 2,400 meters above sea level, a characteristic that generates diverse microclimates.

All days the train Chepe departs from Los Mochis to Chihuahua and from Chihuahua to Los Mochis.

You can start your journey across Copper Canyon from Los Mochis in the state of Sinaloa or from Chihuahua in the state of Chihuahua every day. The train departs from both cities very early in the morning and arrives at the end of the evening (around 21:00).

From Los Mochis to Chihuahua, the CHEPE follows a spectacular track through the most diverse landscapes. During your journey, you cover a difference in altitude of about 2440 m, passing wildly rugged landscapes with many forms of vegetation.

Nature as close as it can be, breathtaking views into dizzying gorges – and the marks of civilization limited to farms and houses, often toy-like on the bottom of the gorges, and the stations.

With your ticket, you have the option of descending at two different stations, at no additional cost. At the stations where you decide to get off you have to remain at least one night, and take the train the next day.

At the moment of making a reservation, you have to specify your layovers.

It is not allowed to board the train with food. The train has a restaurant that requires reserving beforehand. The bar and the terrace also have food service (snacks and drinks). The Executive Class cars have a bar at the end of the wagon.

Baggage: A 25 kg suitcase and one carry-on per person.

With your ticket, you can descend on two stations at no extra cost. If you decide to go down you may remain one or more nights and board the train the next day.

With your ticket, you have the option of descending at three different stations, at no additional cost. In the stations that you decide to get off, you have to accommodate your itinerary to the frequency of the train to continue your trip.

At the moment of making a reservation, you have to specify your layovers.

It is not allowed to board the train with food. The train has a restaurant that serves throughout the journey.

Baggage: A 25 kg suitcase and one carry-on per person.

We offer the option of descending at three different stations, at no extra cost. At the stations where you decide to get off, you can stay at least one night and take the train the next day.