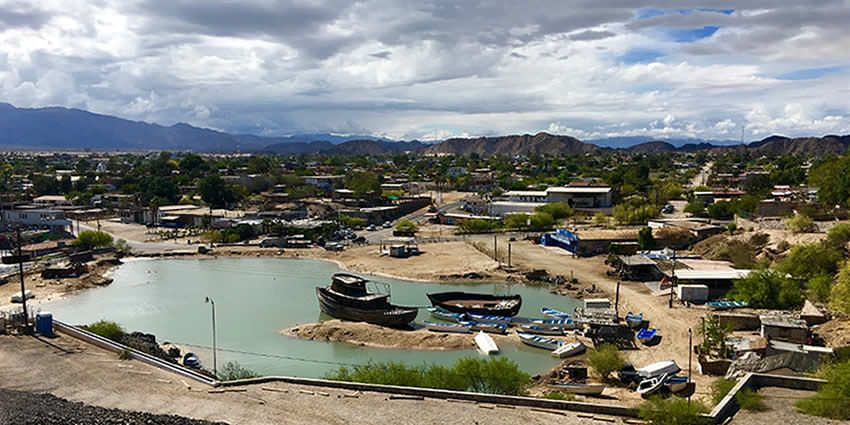 San Felipe is a town on the bay of San Felipe in the Gulf of California (Sea of Cortez) in the Mexican state of Baja California, 190 km south of the United States border and within the municipality of Mexicali. It also serves as a borough seat of its surrounding area.

The Bay of San Felipe is 3 meters above sea level. At low tide, the water can recede as much as 2 km. San Felipe experiences one of the largest tidal bores in the world due in part to the Colorado River delta to the north. The seven-meter tides expose a kilometer of ocean floor.

The port of San Felipe is a small town historically dependent on fishing and now on tourism, catering mostly to U.S. travelers and containing an international airport.

The population of San Felipe was 16,702 at the 2010 census, and can increase by up to 5,000 due to the presence of Canadian and U.S. part-time residents (retirees and vacation homeowners), who travel to the town from the United States during the American holidays spring break and Memorial Day.

Temperatures in San Felipe average approximately 24 °C year-round.
San Felipe is located in a unique ecosystem, where the desert meets the sea.
Temperatures range from a nocturnal winter low of 4 °C (39 °F) to 46 °C (115 °F) in the shade during July and August.

The first European to arrive in the Baja California Peninsula was Hernán Cortés on May 3, 1535. The history of San Felipe began later with the expeditions of Francisco de Ulloa, one of Cortés’s captains who navigated the bay in September 1535. In 1536, Hernando de Alarcón and Domingo Castillo explored the region and made the first detailed map of the peninsula, giving San Felipe its original name, Santa Catalina.

After the first expeditions were long forgotten, Father Eusebio Kino rediscovered the Baja California peninsula in 1701. Juan de Ugarte later built the first ship in Baja California and explored the area, arriving in San Felipe on July 5, 1721. Twenty-five years later Father Ferdinand Konščak arrived and christened the bay San Felipe de Jesús. In 1766, Wenceslaus Linck was the first person to reach San Felipe by land, and in 1794 the Lt. Governor of the Californias, José Joaquín de Arrillaga, began to use it as a port. He also established the land route between San Felipe and Ensenada through Valle de la Trinidad.

It was not until 1925, during the administration of General Abelardo L. Rodríguez, territorial governor, that San Felipe began to incorporate, when the first fishing camps were established and the government organized the first sub-delegation and school. Octavio Vega Ruiz was appointed sub-delegate and the basis for the growth and development of San Felipe were established during his administration from 1926 to 1942.

The sea transportation of both people and cargo also contributed to the integration of San Felipe as a township. Among the most celebrated ships of the era were José Ascolani’s Trieste, and Pacita and Río Colorado, owned by Arnulfo Liera. By the end of the 1920s, San Felipe had nearly 100 permanent inhabitants, and in 1940 appeared for the first time in the census with 287 inhabitants.

By 1947, the Compañía Industrial del Golfo de Cortés, owned by José María Rodríguez Luján, bought the land from Guillermo Andrade’s estate to build an international tourist center. The Mexicali-San Felipe highway began paving in 1948 and was completed in 1951. At the same time, the 15-room Hotel Augies (later the Villa del Mar, Trucha Vagabunda and Las Palmas Inn) opened. In 1959, the motel El Cortés was opened to the public.

Many new hotels were established in the 1960s, including Hotel Riviera, El Pescador, Arnold’s del Mar and Arco Iris, and the tourist camps of Costa Azul, Las Arenas, Miramar, Playa Bonita, Playa de Laura, and Rubén’s. The port had electricity by 1963 and piped drinking water by 1967. The 1970s saw the establishment of the government building, restaurants, bars, gas stations, a small boat anchorage, airport, sea walk, main boulevard and sewage system, as well as the first four-star hotel, the Playas de San Felipe, followed by the Fiesta Hotel. The La Hacienda opened in the 1980s; the Marina Resort and Spa in 1993.

The Valley of the Giants

The natural reserve of the thousand-year-old Cardon Cactus has become a major attraction after the transport of one of these giant specimens to Seville, Spain for Seville Expo in 1992.

The area has also become a favorite spot for photographers worldwide.

Local environmentalists are lobbying for the protection of the valley in the form of a Nature Reserve.

San Felipe was a popular spring break spot for residents of the Western U.S. states and northern Mexico, due to its many tourist attractions. Nightclubs and bars dot the beach areas. Some visitors enjoy camping on the beaches or off-roading on ATVs and dirt bikes in the adjacent desert.

Other popular activities are off-road racing events such as the Baja 250 and San Felipe 250, the former a spin-off from the popular Baja 1000 international race organized by SCORE and the latter hosted by CODE, an off-road racing organization based in Mexicali. In 2007 the SCORE race was changed to Ensenada due to a disagreement between the local ejidos, but the issues were resolved and returned to San Felipe in 2008 and has been held there since. Currently, CODE holds two races in the San Felipe Desert: the CODE San Felipe 200 in April and the CODE Race Ready 275 in December; the first is a loop around the deserts of San Felipe, while the other is a one-way race from Mexicali to San Felipe at the end of the season.

Another visitor attraction are the hot, sulfurous, geothermal springs at Puertecitos on the Sea of Cortez, cooled somewhat by sea water.

In recent years, San Felipe locals and tourists have enjoyed a new activity, Carnaval. It is often referred to as a Mexican Mardi Gras but the name is an exaggeration, since the locale is smaller than in other Mexican carnivals.

New to the San Felipe Calendar of Events is the International Blues & Arts Fiesta, a San Felipe Lions Club fundraiser held the last Saturday in March.

One of the lesser known sightseeing trips in San Felipe is a boat ride to Konsag Island. This is a rock, visible from the San Felipe coast line, and about an hour out to Sea. The area around the rock has lots of marine life and makes for great fishing.