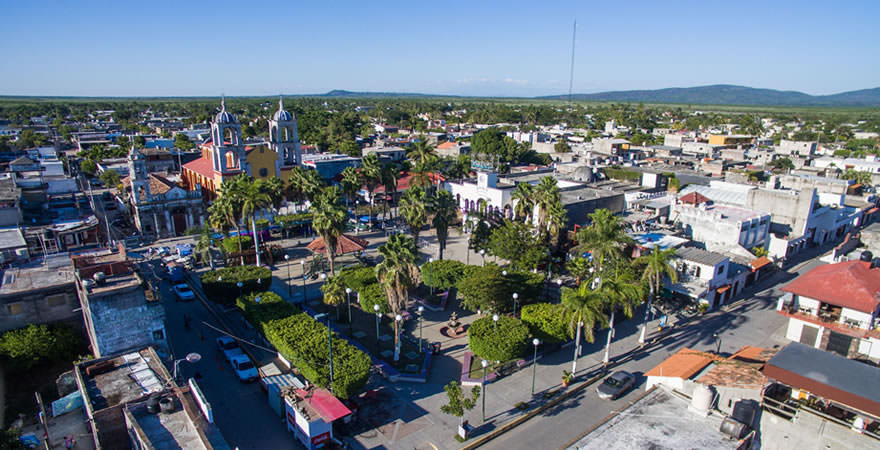 San Blas is both a municipality and municipal seat located on the Pacific coast of Mexico in Nayarit.

San Blas is a port and a popular tourist destination, located about 160 kilometres (99 mi) north of Puerto Vallarta, and 64 kilometres (40 mi) west of the state capital Tepic. The town has a population of 8,707.

The municipality had a population of 37,478 in 2005. The Islas Marías, site of an infamous prison colony, are part of the municipality.

The area is noted for its surfing. Playa de Matanchen was famous for having the longest surfable wave in the world, as listed in the Guinness Book of World Records. A hurricane and subsequent storm surge filled part of the bay with sand, greatly reducing the size of the waves.

The area has an abundance of migratory birds in the surrounding estuaries and lowland palm forests, attracting significant numbers of birders. The Christmas Bird Count regularly finds well over 200 species, with a record 292 species in 1983. There is an annual international gathering of birders at the Garza Canela Hotel.

The town is also a gateway, along with the nearby village of Matanchen, to the La Tovara park, an extensive mangrove forest and federally protected nature preserve accessible by small boats.

The formerly elegant Playa Hermosa, built in 1951, is on a lonely and beautiful stretch of beach about a mile from the plaza. In the 1960s, Hollywood had a brief hideaway flirtation with San Blas when actors including Lee Marvin discovered San Blas for fishing. The hotel is now abandoned.

San Blas was founded in 1531, but the official date of founding is 1768, when Don Manuel Rivera and 116 families arrived on the orders of the Viceroy of New Spain, Marqués de Croix, under the supervision of José de Gálvez, who was visitador general (“inspector”) of New Spain.

San Blas was the port from which the Spanish priest Junípero Serra, Father President of the California Missions, departed for California. He left on March 12, 1768 from the nearby Las Islitas beach on Matanchen Bay, on the locally built barque Purísima Concepción.

In May 1768, San Blas was designated as a new naval base for the Spanish Navy. At first, only two ships were assigned to the port: the packet boat San Carlos, commanded by Juan Pérez, and El Principe, commanded by Vicente Vila. Gálvez ordered four new vessels to be built, one of which was the schooner Sonora, later sailed in 1775 by Juan Francisco de la Bodega y Quadra to Alaska.

On March 16, 1775, the San Carlos was set to depart San Blas, Mexico, for San Francisco Bay, stopping in Monterey to unload supplies for the mission there. The vessel was a product of the shipyard established on the Santiago River. Her length was 58 feet, the officers and men numbered 30. The voyage was delayed 3 days, until the first officer, 30-year-old Juan Manuel de Ayala, subdued the commander, “who had lost his wits and had to be taken back to port.” The captain had been threatening the crew with loaded firearms and “without proper safeguards”. Officer Ayala shot himself in the right foot while securing the weapons, but they sailed for San Francisco on March 19 under his command. They reached Monterey Bay on June 25. After a month there, she sailed, and arrived off the “yet unexplored Golden Gate”. A land party had seen the south bay having traveled overland from Monterey. A first mate named Jose de Canizares entered in a long boat, being the first recorded European to enter what is now known as San Francisco Bay.

From its founding, the naval base provided logistical support for the Franciscan missions of Alta California. As the number of missions grew, San Blas was required to send supply voyages more frequently, taxing the naval base’s small fleet and finances. San Blas also became the base for Spanish expeditions to the Pacific Northwest. From 1789 to 1795, San Blas was responsible for establishing and maintaining the Spanish post at Nootka Sound and Fort San Miguel. For about twenty years in the late 18th century, San Blas was one of the busiest ports and shipbuilding centers on the Pacific coast of the Americas, rivaling Acapulco, the eastern terminus of the trans-Pacific Manila galleon convoy.

In many ways, San Blas was a poor choice for a deep sea harbor and settlement. The harbor was so small that it could never hold more than four ships at a time. Silting caused by the nearby Río Grande de Santiago resulted in the need for the harbor to be regularly dredged. The climate’s stifling humidity and torrential rains from July to October, coupled with extensive mangrove swamps that surrounded the settlement, resulted in San Blas being plagued by clouds of voracious mosquitoes. A variety of sicknesses were endemic, including dysentery, typhoid fever, malaria, and other fevers. Naval officers and workers regularly complained about the climate. When Alessandro Malaspina visited in 1791, he found San Blas’s climate so unhealthy that he refused to stay there, instead transferring his operations and some of San Blas’s ships and personnel to Acapulco. San Blas’s location was useful and logical, however, because it minimized travel time from Guadalajara and Mexico City without increasing the total distance to the Californias. Also, the area around San Blas had a plentiful supply of hardwoods useful for ship building and repair. Fresh water was also available year round.

A hillside fort was built in 1770 to defend the town’s extensive sea trade with the Philippines. Its front has stone carvings of the kings of Spain. On the hill behind the fort are the ruins of the Church of Our Lady of the Rosary, built in 1769. The ruins once contained the bronze bells that are said to have inspired Henry Wadsworth Longfellow’s poem, “The Bells of San Blas”. The ruins of a 19th-century customs house are on Calle Benito Juárez, three blocks from the main plaza.

During the colonial period, hardwood forests were the raw materials for ships that did a brisk trade with the Philippines and the Manila galleon until the shipping moved to the port at Manzanillo, and later to Acapulco.

At its height, the town had 30,000 inhabitants and became headquarters of Spain’s General of the Southern Seas.

During the 1900s, San Blas served as the arrival port for thousands of Yaqui men, women and children forcibly removed from their lands and sold into slavery. At San Blas, these families were forcibly marched 200 miles to San Marcos and its train station. Those who did not die on the march were sold into slavery at San Marcos, where they were deported to the sugar cane plantations in Oaxaca, the tobacco planters of the Valle Nacional, and the henequen plantation owners of the Yucatán for use as slave labor. Most of the enslaved workers died within the first year of their captivity.