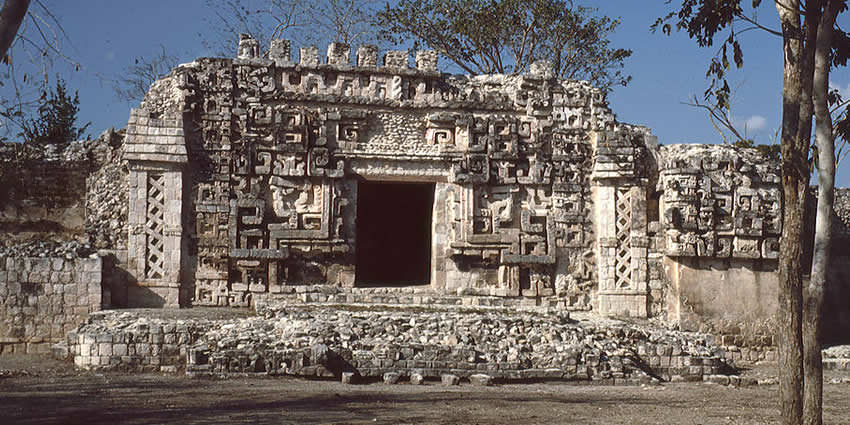 Hochob Mayan Ruins. This site is a natural hill, forming a quadrangle, whose top, almost flat, serves as the base for building a group of people in the region known as the Hochob, a Mayan word meaning “place of ears of corn.”

This is one of the best preserved examples of Chenes style architecture.
Typical of this style, the Maya decorated the entire front of the principal facade of their structures. Generally, the face of the sacred monster, the iguana or Itzamna, was represented with the mouth open.
In addition to the three restored buildings at Hochob, one can appreciate an example of one of the most ancient systems for capturing and storing rain water used by the ancient Maya: the chultunes or cisterns.

It is a great site dating to approximately AD 100 and is developing steadily to around 1100 AD the site was built on an artificial elevation reaches about 30 m above the ground adjacent to contain a set of buildings that formed what apparently was the ceremonial center.

Neighborhood size three regular spaces are grouped the East Palace, the main palace and other buildings nearby structures on platforms formed by low-rise. The facades of buildings in general show a richly decorated in the Chenes style, based on large and small blocks of stone perfectly arranged to form emotional Itzamná masks of the god, whose open jaws threatening announced the entrance of the buildings that housed safely temples, priests’ chambers and rooms.

Another of the structures shows the typical regional style layout, with two large towers that are decorated with simulated steps flanking the central entrance of the building.

Located 135 km east of the city of Campeche, on Highway 261 until Hopelchén. Turn right on State Road 269 to Dzibalchen and turn right to the town of Chencoh.

It is advisable to carry water, clothing and comfortable shoes. Do not forget to bring sunscreen and a hat or cap to protect the skin from the sun and insect repellent, be sure to respect the signs and indications of security personnel.