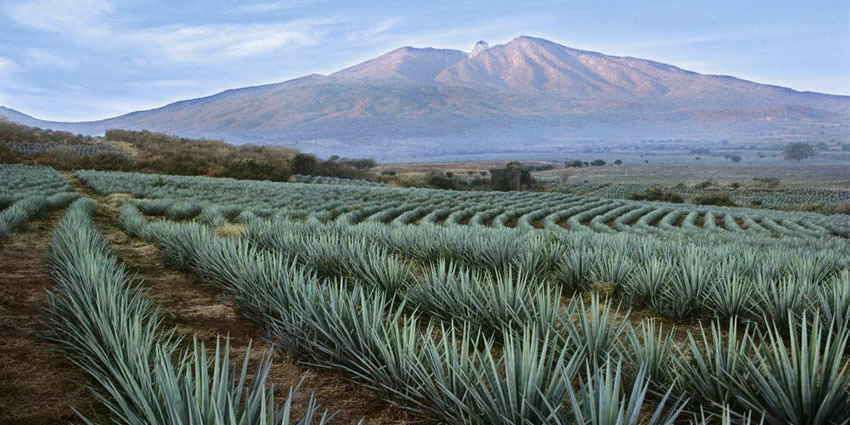 Agave is a genus of monocots native to the hot and arid regions of Mexico. The plants are perennial, but each rosette flowers once and then dies. Some species are known by the name “century plant” because of the long time the plant takes to flower.

Agaves are succulents with a large rosette of thick, fleshy leaves, with most species ending in a sharp terminal spine. The stout stem is usually short, the leaves apparently springing from the root.

Along with plants from the related genus Yucca, various Agave species are popular ornamental plants in hot, dry climates, as they require very little water to survive.

Each rosette is monocarpic and grows slowly to flower only once. During flowering, a tall stem or “mast” (“quiote”) grows from the center of the leaf rosette and bears a large number of short, tubular flowers.

After the development of fruit, the original plant dies, but suckers are frequently produced from the base of the stem, which become new plants.

It is a common misconception that agaves are cacti. They are not related to cacti, nor are they closely related to Aloe whose leaves are similar in appearance.

Agave leaves store the plant’s water and are crucial to its continued existence. The coated leaf surface prevents evaporation.

The leaves also have sharp, spiked edges. The spikes discourage predators from eating the plant or using it as a source of water and are so tough that ancient people used them for sewing needles. The sap is acidic.

Agaves bloom at a height up to 30 ft (9 m) so that they are far out of reach to animals that might attack them. Smaller species, such as Agave lechuguilla, have smaller bloom stalks.

Agave nectar, also called agave syrup, a sweetener derived from Agave sap, is used as an alternative to sugar in cooking and can be added to breakfast cereals as a binding agent.

American Agave (“Agave americana”) is one of the most familiar species of Agave americana, a native of tropical America. Common names include century plant, maguey (in Mexico), or American aloe (not related to the genus Aloe).

The number of years before flowering occurs depends on the vigor of the individual plant, the richness of the soil, and the climate; during these years the plant is storing in its fleshy leaves the nourishment required for the effort of flowering.

It grows best in the cold, dry climates of the rocky central highlands to the north and east of Mexico City, especially in the states of Hidalgo and Tlaxcala. Maguey has been cultivated at least since 200 CE in Tula, Tulancingo, and Teotihuacan, and wild plants have been exploited for far longer.

The plant historically has had a number of uses. Fibers can be extracted from the thick leaves to make rope or fabric, thorns can be used as needles or punches, and the membrane covering the leaves can be used as paper or for cooking.

The name “maguey” was given by the Spanish, who picked it up from the Taíno. This is still its common name in Spanish, with Agave being its scientific generic or technical name. The Nahuatl name of the plant is “metl”.

Agave attenuata is a native of central Mexico and is uncommon in its natural habitat. Unlike most species of agave, Agave attenuata has a curved flower spike from which it derives one of its numerous common names – the foxtail agave.

Agave attenuata is also commonly grown as a garden plant. Unlike many agaves, Agave attenuata have no teeth or terminal spines, making it an ideal plant for areas adjacent to footpaths.

Like all agaves, Agave attenuata is a succulent and requires little water or maintenance once established.

Agave tequilana or Agave Azul (“blue agave”) is used in the production of tequila. In 2001, the Mexican Government and European Union agreed upon the classification of tequila and its categories.

All 100% blue agave tequila must be made from the Agave tequilana “Weber’s Blue” agave plant to rigorous specifications and only in certain Mexican states.

Tequila is a regional distilled beverage and type of alcoholic drink made from the blue agave plant, primarily in the area surrounding the city of Tequila, 65 km northwest of Guadalajara, and in the highlands of the central western Mexican state of Jalisco.

Aside from differences in the region of origin, tequila is a type of mezcal (and the regions of production of the two drinks are overlapping). The distinction is that tequila must use only blue agave plants rather than any type of agave.

Tequila is commonly served neat in Mexico and as a shot with salt and lime across the rest of the world.

Mexican laws state that tequila can only be produced in the state of Jalisco and limited municipalities in the states of Guanajuato, Michoacán, Nayarit, and Tamaulipas. Tequila is recognized as a Mexican designation of origin product in more than 40 countries.

Mezcal (or mescal) is a distilled alcoholic beverage made from any type of agave. The word mezcal comes from Nahuatl mexcalli “metl” and “ixcalli” which means “oven-cooked agave”.

Agaves or magueys are found mainly in many parts of Mexico and all the way down to the equator, though most mezcal is made in Oaxaca. It can also be made in Durango, Guanajuato, Guerrero, San Luis Potosí, Tamaulipas, Zacatecas, Michoacan and the recently approved Puebla.

A saying attributed to Oaxaca regarding the drink is: “Para todo mal, mezcal, y para todo bien, también”. (“For everything bad, mezcal, and for everything good as well.”).

It is unclear whether distilled drinks were produced in Mexico before the Spanish Conquest.

The Spaniards were introduced to native fermented drinks such as pulque, made from the maguey plant. Soon, the conquistadors began experimenting with the agave plant to find a way to make a distillable fermented mash. The result was mezcal.

Despite the similar name, mezcal does not contain mescaline or other psychedelic substances.

Today, mezcal is still made from the heart of the agave plant, called the piña, much the same way it was 200 years ago. In Mexico, mezcal is generally consumed straight and has a strong smoky flavor.

Though mezcal is not as popular as tequila (made specifically from the blue agave in select regions of the country), Mexico does export the product, mostly to Japan and the United States, and exports are growing.

Sikua is/was only crafted in the state of Michoacan. “Siku” is what the native Indians used to call the maguey.

After many years, and due to pending NOM 186, Michoacan was finally accepted as part of the Mezcal producing region in 2012.

States where Sikua is produced: Michoacan

Raicilla is named after the only region in Mexico that is allowed to produce it. The process of making raicilla is similar to that of mezcal. It was actually established by the Raicilla Promotional Council that only traditional methods can be made to make this regional mezcal.

The two primary raicilla regions use slightly different methods. The Jalisco region typically uses an above-ground brick or clay oven, while in Cabo Corrientes they typically use earthen pits to produce raicilla.

Also like mezcal, raicilla can be made from several different agave varieties.

States where Raicilla is produced: Jalisco

This agave spirit can only be produced in the state of Sonora. It’s a rather new spirits, as the production of bacanora has only been legal since the 1990s.

Bacanora is made from a seven to ten-year-old Agave Angustifolia Haw in a process similar to mezcal. The piña is roasted in earthen pits, crushed, fermented, then distilled. The finished product results in an earthy, slightly smokey flavor.

States where Bacanora is produced: Sonora

If you’re not familiar, sotol is the traditional spirit of Chihuahua. The sotol plant is in the same family as agave, yet can flower multiple times, unlike the genus agave.

It grows in the high desert Chihuahua – along with New Mexico and Texas – giving it the nickname Desert Spoon.

The distilling process is similar to the makings of traditional mezcal, yet the juices are double-distilled. Slightly herbal and smoky, mix sotol with complementary flavors like agave sweetener, fresh herbs, or fruit.

Pulque, occasionally referred to as agave wine, is an alcoholic beverage made from the fermented sap of the maguey (agave) plant. It is traditional in central Mexico, where it has been produced for millennia.

It has the color of milk, a somewhat viscous consistency, and a sour yeast-like taste.

The manufacturing process of pulque is complex and required the death of the maguey plant. As the plant nears maturity, the center begins to swell and elongate as the plant gathers stored sugar to send up a single flower stalk, which may reach up to 20 feet in height.

However, plants destined for pulque production have this flower stalk cut off, leaving a depressed surface 12-18 inches in diameter. In this center, the maguey sap, known as aguamiel (honey water), collects.

The drink’s history extends far back into the Mesoamerican period when it was considered sacred, and its use was limited to certain classes of people. After the Spanish Conquest of Mexico, the drink became secular and its consumption rose.

The consumption of pulque reached its peak in the late 19th century.

In the 20th century, the drink fell into decline, mostly because of competition from beer, which became more prevalent with the arrival of European immigrants. There are some efforts to revive the drink’s popularity through tourism.