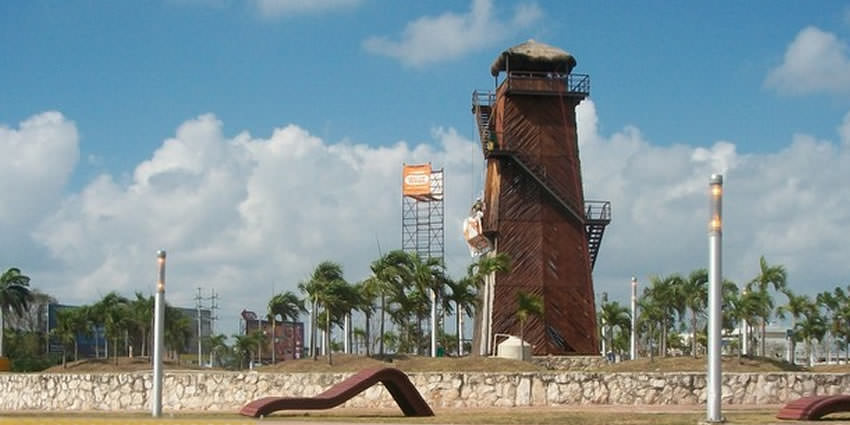 Today the Cancun International Airport has two runways and a tall control tower, reaching 18th place among the tallest control towers in the world.

Cancun began its air operations on a rudimentary runway, operating with a control tower made of sticks and palms that operated until 1973. The original control tower was a temporary wooden construction for the operative needs of the recently created airport.

Some documents’ records mention that at that time there were no other buildings constructed in the area, so the old control tower was possibly the first built structure in Cancún’s recent history.

Cresencio Ballesteros, the main shareholder and then president of Mexicana de Aviación, once said, skeptically looking at the initial precarious airport: “Forgive me for saying this, but I think that a Mexicana jet will never land here”.

In 1976, once the new airport was built, a commercial jet accidentally landed on Kabah Avenue, which previously served as the runway for the first airport, causing confusion and surprise.

Due to its accelerated growth, the Cancun of today is very different from the town that once was a few decades ago. In the Glorieta de la Colosio, there is proof of that small town that few knew – the old control tower.

This wooden structure on the Great Glorieta de la Colosio is a replica of the tower that controlled the arrival of flights. It is located on what was the 1st runway of the 1st airport that this Caribbean oasis once had.

The old Control Tower in Cancun is the work of the brothers Agustín and Enrique Landa Verdugo, made with wood. In 1976 this Tower was dismantled to create a new airport, Avenida Kabáh, and Boulevard Colosio that we know today.

For many years, this monument was forgotten until in 2000 a replica was created, fed by the pioneers and by the Cancun authorities. This Tower was part of the 30th-anniversary celebration and since then it has been a symbol that even some people from Cancun do not know about its value.

The memorial was first built in 2002 with a donation by Aerocaribe Airlines, but the structure was damaged after hurricane Wilma hit Cancun in 2005.

After pleas by the locals, the tower memorial was rebuilt and the new replica of the old control tower was raised in 2010.

The construction was later abandoned without proper maintenance until Woox Pinturas, a local wood maintenance company, made a donation to restore the structure to its original aspect.

The place where this memorial is located today was exactly where the control operations were carried out the old Cancun Airport, on the main road to the Cancun Airport, Playa del Carmen, and Tulum.

Previously, people could climb this historic structure and get a more interesting view of the city of Cancun and get an idea of ​​what the city was like at that time, today, it remains a memory of the beginning of that promised land that today has become one of the main and most beautiful tourist destinations in the country.

On the morning on April 6, 2020, the old Cancun airport tower was rescued from the fire, thanks to an alert call. Emergency forces were mobilized because they reported a fire registered. The drivers passing by the place realized that the emblematic monument of the city was on fire.

Fire department personnel arrived minutes later to put down the fire. At this moment the fire had already consumed part of the base to the top.