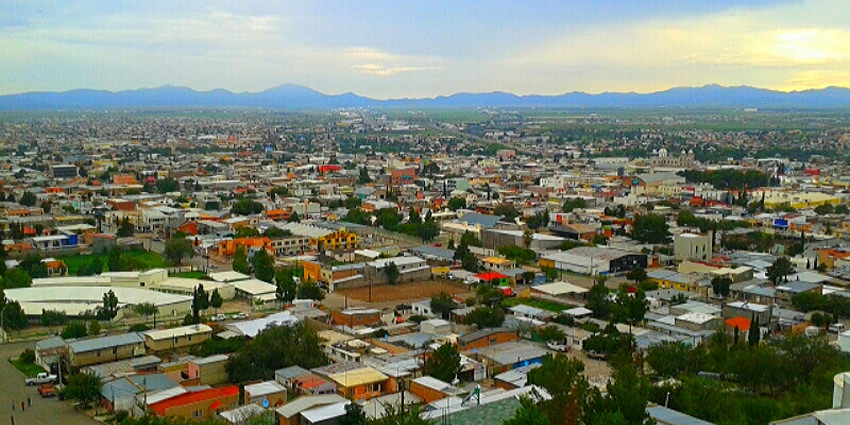 Ciudad Cuauhtémoc is a city located in the west-central part of the Mexican state of Chihuahua. It serves as the seat of the municipality of Cuauhtémoc.

The population in 1953 was just under 3,000, composed almost entirely of Mexicans with the exception of foreign-born people who have gone there as traders. The town of Cuauhtémoc developed after the coming of the Mennonites in the 1920s although very few Mennonites lived in town, for it was the Mennonite shopping center. A railroad, a highway, and a bus line connected Cuauhtémoc with Chihuahua.

Ciudad Cuauhtémoc has a semi-arid climate moderated by its altitude. Winters are cool and sunny with a January average of 7.5 °C (45.5 °F) and temperatures regularly fall below freezing. Occasionally, the city can see 1 or 2 snowfalls per year.

Most of the precipitation falls during this time of the year, during the monsoon season.

The Mennonites settled in the San Antonio Valley, as far as 120 km (75 mi.) to the north of the town. There was a General Conference Mennonite Church in the town composed almost entirely of Mennonite refugees who came to Mexico after World War I. The growth of the Mennonite population due to natural increase and to additional immigration from Canada stimulated its economic activities. A small cereal factory was established by non-Mennonites, while a large cheese factory, slaughterhouse, and ice plant were erected by Mennonites (the Redekops) in the town. In 1947 the Mennonite Central Committee established a service unit in Cuauhtémoc to provide health services, recreational direction, and assistance in educational activities of German-speaking children

In the early 1930s the recent Mennonite immigrants from the Soviet Union (Rußländer) formed a Mennonite congregation in the town, but by 1987, it had disintegrated completely. The few Mennonite families and General Conference Mennonite Church and Mennonite Central Committee workers living in the city in 1986 (5 families and 5 singles) worshipped mostly at the General Conference congregation at Kilometro 11. Cuauhtémoc was the first city to erect a senior citizens home under public or government jurisdiction. Its first matron was a Mennonite, Maria Giesbrecht, from the Santa Rita Colony (Nord Colony).

In the early 1950s there were no improved roads leading from the hinterland into Cuauhtémoc. A four-lane highway, completed in 1986, connected the city with the city of Chihuahua, the state capital. Another highway connected Cuauhtémoc with Col. Anahuac, where a large pulp mill is located. The Gran Vision highway, which is to be continued to the west coast through the Sierra Madre Occidental mountains, joins the city to the western hinterlands, and another highway leaving the city passes through the Mennonite colonies to the north (Manitoba Colony).