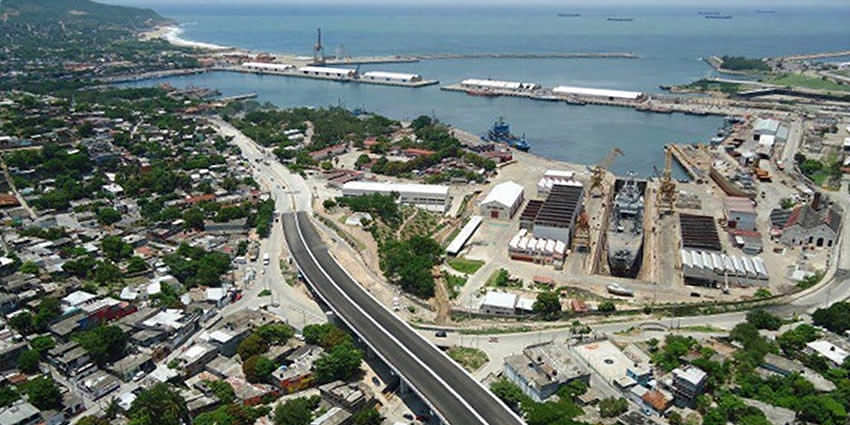 Salina Cruz is a major seaport on the Pacific coast of the Mexican state of Oaxaca.

It is the state’s third-largest city and is the municipal seat of the municipality of the same name. It is part of the Tehuantepec District in the west of the Istmo Region.

The port was developed in the late 19th century due to its location at the southern terminus of the Ferrocarril Transístmico, which carried freight across the Isthmus of Tehuantepec.

There was only a small Native village before Salina Cruz was chosen as the Pacific terminus of the Tehuantepec National Railway, whereupon a modern town was laid out and built on adjacent higher ground and an artificial harbour was built by the Mexican government to accommodate the expected traffic.

The new port was opened to traffic in 1907 and in 1909 its population was largely composed of labourers. The harbour was formed by the construction of two breakwaters, the western 3,260 ft (990 m) and the eastern 1,900 ft (580 m) long, which curve toward each other at their outer extremities and leave an entrance 635 ft (194 m) wide.

The enclosed space is divided into an outer and inner harbour by a double line of quays wide enough to carry six great warehouses with electric cranes on both sides and a number of railway tracks. Connected with the new port works was one of the then-largest dry docks in the world 610 ft (190 m) long and 89 ft (27 m) wide, with a depth of 28 ft (8.5 m) on its sill at low water. The works were planned to handle an immense volume of transcontinental freight, and before they were finished four steamship lines had arranged regular calls at Salina Cruz.

Salina Cruz features as the focus for the novel Last Stop Salina Cruz (2007) by British novelist David Lalé. The novel tells the story of a young man following in the footpaths of modernist legend Arthur Cravan across France, Spain, USA, Mexico and finally Salina Cruz.