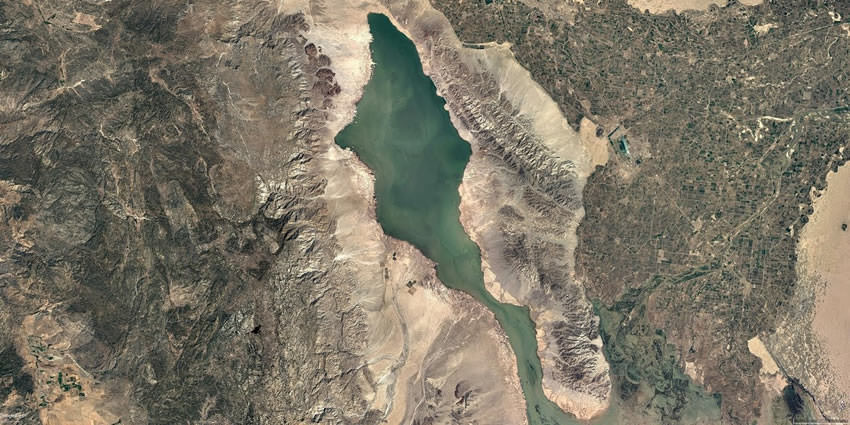 The lake’s shape vaguely resembles a rhombus. When dry, the flatness of the exposed lakebed sediments makes it a favored location for recreational driving.

It is also notorious for its dust storms (when dry), usually the result of monsoonal thunderstorms during the summer.

During times of significant rain, the lagoon can fill completely with water, leaving the unpaved road along its west bank as the only means of traversing the area.

Flanked by the Sierra de Los Cucapah and the Sierra de Juárez mountain ranges, the lake is approximately 60 km long and 17 km at its widest point.

The lake itself is located on the bottom of a shallow depression, a graben, which is linked to the San Andreas Fault, and the East Pacific Rise as part of the Laguna Salada Fault.

The Laguna Salada has been, on several occasions, the scene of cultural events of various kinds, especially since the beginning of the 21st century.

It was part of an event called “Pavarotti without borders” that took place on October 18, 2003, as part of the celebrations of the centenary of the city of Mexicali. This event was part of one of the last tours of the Italian tenor Luciano Pavarotti.

The movie “Resident Evil: Extinction” used the Laguna Salada as a film location for one of its scenes.

During the month of May 2006 and one of the episodes of the “Curiosity” program used the dry vessel of the lagoon to experience and film the fall of a Boeing 727 aircraft. This was the second experiment of its kind conducted in the world and It was made on April 27, 2012, to be screened on television on October 7 of that same year in the United States.

On August 1, 2012, the first launch in the state of Baja California of a rocket, manufactured by students of the aerospace engineering career of the UABC engineering and technology center, took place. The device named “Cimarrón I” reached an altitude of more than three thousand meters and consultants from NASA and the SJSU participated in the project.

There have also been some editions of an ultra-marathon called Ultramarathon in the desert of Laguna Salada, at the beginning of the second decade of the 21st century.

And finally the realization of varied events among which are: collective astronomical observations by fans, off-road races, and exhibitions of aeromodelling among others.