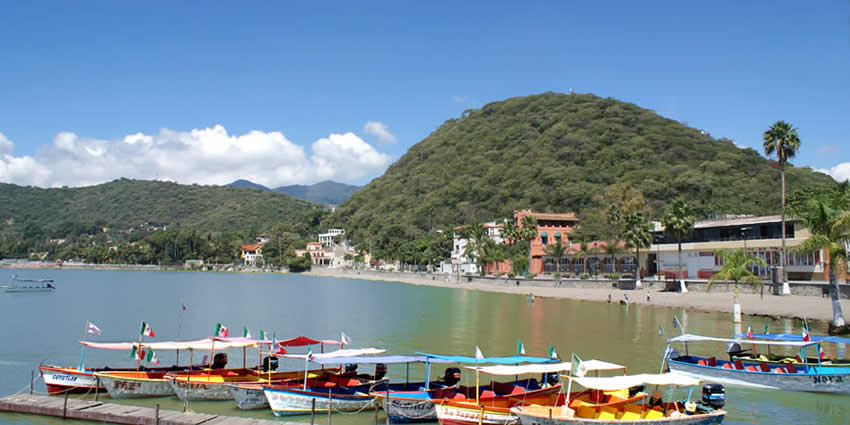 It is fed by the Río Lerma, Río Zula, Río Huaracha, and Río Duero rivers, and drained by the Rio Grande de Santiago. The water then flows northwest into the Pacific Ocean.

The city of Guadalajara, Jalisco, has relied on Lake Chapala as a principal source of water since the 1950s. Shortly after, a few consecutive years of poor rainfall dramatically decreased the water level of the Lake. The level rebounded until 1979, when Lake Chapala’s water level began rapidly decreasing due to increases in urban water consumption.

Erosion due to deforestation along the Lake as well as the Lerma River has led to increased sedimentation of the Lake, also contributing to loss of lake depth. The shrinking depth has also raised the Lake’s average temperature, resulting in increased evaporation.

Simultaneously, the waters of Lake Chapala are polluted by municipal, industrial and agricultural wastes, coming primarily from the Lerma River. The increased presence of nutrients from the pollution combined with the warmer water has been a boon to an invasive species of water hyacinth.

The increase in water pollution has had devastating effects on the ecology of the lake. Fish stock has decreased dramatically and some endemic species (e.g. a fish colloquially known as ‘white fish’) are on the verge of extinction. Contaminated fish stock has also posed a serious threat to the health and livelihoods of people who depend on the fish for food and their livelihoods.

The drop in the lake’s water level has uncovered political issues that had been hidden for many years. Its fast decay has raised concern in the surrounding areas and in the scientific community. It was the Global Nature Fund’s “Threatened Lake of the Year” in 2004.

By 2007 and 2008, the level of Lake Chapala increased drastically, though the levels have yet to surpass the level in 1979, when the levels began a precipitous decline. Although it is still subject to agricultural, domestic, and industrial sources of contamination, the actual levels of hazardous materials has not been officially assessed with regularity.

Although water level and quality improved due to water treatment plants along the Lerma river, in 2017 the water quality of Lake Chapala water was assessed as a risk to public health.

The lake is also a critical habitat for several species of migratory birds, such as the American white pelican, and home to thousands of indigenous plants and animals.

The Audubonistas de Laguna de Chapala holds an annual Audubon Society sponsored Christmas Bird Count. In 2006, some 117 species were identified and, in 2007, the count was 125. By January, 2011, some 173 species were recorded.

In recent years, because of the benign prevailing climate and attractive scenery, a substantial colony of retirees, including many from the United States and Canada, has established itself on the lake’s shore, particularly in the town of Ajijic, Jalisco, located just west of the city of Chapala.