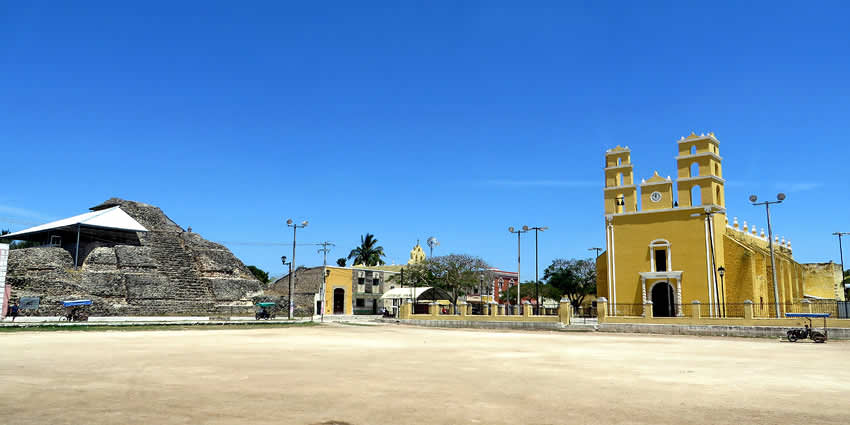 Acanceh is a small town located in the Mexican state of Yucatan, situated 21 km from Mérida.

The population of Acanceh is almost solely Maya, with the Mayan language predominantly spoken.

Acanceh represents an interesting contrast – a town square with a Mayan pyramid on one side, and a catholic church across from it. Acanceh is unique in its integration of the modern town and the remains of its ancient past.

For example, next to the Acanceh pyramid there is a grocery store, a bakery, several lots, and even an Alcoholics Anonymous meeting place. The Palace of the Stuccos is surrounded by the private property where washing lines are not an uncommon sight.

The central plaza is buzzing with activity. The ancient pyramid is an odd sight on the edge of the plaza, but a refreshing one.

In Acanceh, more than in other places, you can really sense the pride which locals have for their wondrous Maya heritage.

Origin of the name Acanceh

A striking recent discovery is a fact that Acanceh seems to have always been the name of this place, as proven by an ancient hieroglyphic text found in the town and only recently read by epigraphers.

The word “Acanceh” means “Lament (groan) of the Deer” in the Yucatec Maya language.

The site of Acanceh has never really been lost, as it has been uninterruptedly occupied since the Preclassic until the present.

Acanceh was founded sometime between 300 and 500, during the Early Classic period. The city was founded by the Itzaes.

The first mention of Acanceh from an archaeological perspective was made by the French explorer-photographer Desiré Charnay, who spoke of structures built with finely-carved blocks, not unlike other Maya buildings of the area.

The first archaeological work to have ever taken place in this old town was done by Austrian explorer-photographer Teobert Maler, who reported a mound of loose stone in the town’s main square, underneath which he found remains of a once-vaulted chamber as well as stucco masks.

Nevertheless, Maler did not consolidate the building. It is important to mention that Maler also photographed the unusual and fascinating stucco reliefs for which the Palace of the Stuccos, the second major structure in Acanceh, is named.

By 1933, when Mexican scholar Miguel Angel Fernández worked at the site, he noted that the decoration reported by Maler was all but gone. Nevertheless, through the use of what remained and Maler’s photographs, he was able to draw a reconstruction of the building prior to consolidating it.

It turned out that the building was of a typical early (Late Preclassic to Early Classic) Petén configuration known as a radial pyramid: one that is basically square and has staircases oriented towards all four cardinal directions.

The loose stone, however, points to the fact that there once was a later construction covering the early building visitors see today.

Very recently, Acanceh was the focus of a major archaeological effort, conducted by Beatriz Quintal.

Quintal’s project uncovered a great deal of the hitherto unexcavated Palace of the Stuccos, brought to light a previously ignored but substantial pyramidal building in the town, and found four spectacular giant stucco masks on the main temple’s eastern, western and northern façades.

Judging from the style of the large masks, the building may have well been built in the Late Preclassic, marking Acanceh as an important urban center as early as some 2,000 years ago.

Quintal’s project also included a general survey of the ancient town, which determined the existence of a minimum of 160 structures spread over an area of more than two square kilometers.

The ancient Maya city covered more than 4 square kilometers and had about 400 buildings. Three of these buildings have been restored and are open to the public, although recent excavations have uncovered more structures.

Archaeologists date the ruins of Acanceh to 300 CE and the dawn of the Classic Era.

At this stage in Maya history, the great cities were much farther south in Guatemala and the Chiapas region of Mexico. There’s a reason to suspect that Acanceh wasn’t even founded by the Maya – its oldest carvings are evocative of Teotihuacan, a powerful empire from northern Mexico.

In a rare juxtaposition of the pre- and post-Columbian religions, Acanceh’s central pyramid is found right across from the town cathedral.

The Spanish must have been in an unusually good mood when subjugating Acanceh because Mayan structures in populated towns were almost always demolished so that their stones could be used as material for the new churches, but Acanceh’s pyramid was allowed to survive.

The three-leveled step pyramid in Acanceh is 11 meters high. One of the older layers of the pyramid has been uncovered revealing several distinctive carved masks as part of the pyramid’s decoration.

Archaeologists eventually discovered a secondary structure hiding underneath the outer layer of the pyramid – a sub-pyramid, crowned by eight enormous masks which look out over the town, two facing in each cardinal direction.

You can climb the scaffolding for an up-close look at the sculptures, of which only a couple have survived relatively intact.

Probably the most impressive is the one known today as the “Palace of the Stuccos”. Large stucco reliefs of Mayan gods are found along the top edge and have been carefully preserved.

The “Palace of the Stuccos” is 50 meters wide, and 6 meters high, and contains many elaborate friezes. This building’s design is very complex, with many rooms and detailed carvings.

The architecture of the structures at Acanceh shows a Teotihuacan influence, leading some to believe it was a “colony” of Teotihuacan.

A steel roof carefully covers the stuccos on the pyramid above.

You can pay admission, and the caretaker will let you in. Once inside, you can climb the front, or go around the back where there is an actual staircase to the top.

Parish of our Lady of the Nativity

The Parroquia de Nuestra Senora de la Natividad dates to the 16th Century and is currently painted a brilliant yellow.

The contrast of the yellow, along with the day’s deep blue sky, made for some beautiful pictures.

The interior of the church is quite austere, as is typical in the smaller Yucatecan churches.

This is a very simple chapel accessed by a series of steps. Inside there are a few pews and a framed picture of the Virgin of Guadalupe. The chapel dates to the 16th century.

Archaeologists working at the Mayan site of Acanceh in the Yucatan have unearthed a building that was used as an observatory by ancient priests during the Early Classic period (CE 300-600).

One of the oldest observatories found to date, the semi-circular structure is aligned with the sun and Venus, a planet of immense symbolism for the Maya.

The archaeologists discovered that when Venus reaches its maximum brilliance in the north every 584 days the building’s alignment marks the planet’s location with light and shadows on the southern wall.

It also records the moment when the sun reaches its zenith and shadows disappear for a short time.

During the spring and autumn equinoxes in March and September, the setting sun is visible through the two doorways of the observatory and the rays also hit the Pyramid of the Masks, the largest and most important building in Acanceh.

How to get to Acanceh