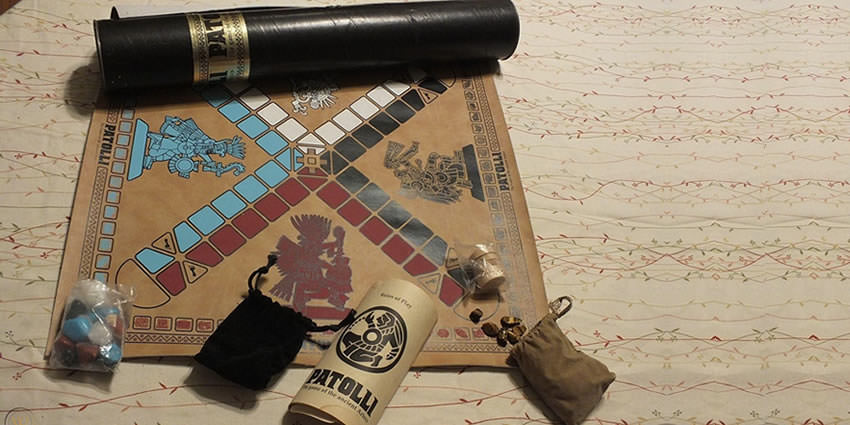 Patolli or patole is one of the oldest known games in America. It was a game of strategy and luck, played by commoners and nobles alike. It was reported by the conquistadors that Montezuma often enjoyed watching his nobles play the game at court.

Patolli or variants of it was played by a wide range of pre-Columbian Mesoamerican cultures and known all over Mesoamerica: the Teotihuacanos played it as well as the Toltecs, the inhabitants of Chichen Itza, the Aztecs, and all of the people they conquered (practically all of Mesoamerica, including the Zapotecs and the Mixtecs).

The ancient Mayans also played a version of patolli. Some anthropologists say the Aztec patolli derives from the East Indian game of pachisi, but other ones think that the two games were independently developed and that the similarity between them is merely due to the limitations of a board game.

Patolli is a race or war game with a heavy focus on gambling. Players would meet and inspect the items each other had available to gamble. They would bet blankets, maguey plants, precious stones, gold adornments, food or, in extreme cases, their homes and sometimes their family and freedom. Agreeing to play against someone was not done casually as the winner of the game would ultimately win all of the opponent’s store of offerings.

It is possible that the patolli had a ceremonial and religious sense: the time cycle of the Aztecs is based on 52 years, the same amount of game squares; anyway, that sense is still not very clear.

Some of the symbolism of the patolli, reflected in the 52 squares that it contains, is the 52-year cycle known as “Xiuhmolpilli” (Calendar Wheel), related to the New Fire, as well as the “Huehuetiliztli”, cycle of 104 years, cycles that the Mexicas and the Maya performed, as well as the duality that was closely linked to the cosmogony of pre-Columbian cultures.

The god of the patolli was Macuilxochitl, the deity of music, dance and gambling, called God of the Five Flowers.

Before starting to play, the players invoked Macuilxochitl and offered him incense and food. They bet blankets, maguey plants, precious stones and gold ornaments when they ran out of clothes they staked their freedom selling themselves as slaves.

How to play Patolli?

Five (or sometimes six) black beans are used as dice. Each bean has one side marked with a hole; thus, tossing the black beans will result in some showing this white mark and others showing a blank side.

Dice could also be used in some versions of Patolli.

The game pieces are six red and six blue pebbles; each player controlled one color as their set of game markers. Beans, kernels of maize or even pieces of jade could also be used.

The game board has 52 squares arranged in an “X” shape. The game board was traditionally painted with liquid rubber or drawn on a bit of leather or a straw mat and decorated with colored dye, or carved into the floor or a tabletop.

The object of patolli is to move six game pieces to the end of a board composed of specially-marked squares. In order to complete a round, a player must get all six of their game markers from their starting queue to the ending square on the game board before the other player.

The ultimate goal of the game is for a player to win all of the opponent’s treasure; to do this, the players may need to play more than one round of the game.

The players take turns tossing the beans onto the game area. In order for a player to get one of their markers on the game board, one bean would have to land with its hole face up and all the others face down (getting a score of one). Once a player has done so, the player places one of their game markers from their starting queue onto the starting square of the game board.

If a player already has a marker on the game board, they can move it forward (clockwise around the X) the same number of spaces as there are holes showing from the toss. A toss showing five holes, however, allows the player to move their marker ten spaces forward. If the player cannot move any of their markers because they would overshoot the ending square or land on a spot occupied by either player, they lose their turn.

There are several specially-marked areas on the game board:

If a player’s marker reaches the ending square by exact count, the marker is removed from the board and the opponent must give up one of their treasures to the player. The round is over once one player gets all six of their markers off the board this way. If no player has won the game (see below), players must play another round.

As soon as a player has won all of their opponent’s treasures, the game is over and that player is the winner.

In addition, if a toss results in all the beans standing on their sides, the tosser automatically wins all the goods bet by both parties.

Macuilxochitl’s role in the game

According to the Magliabechiano codex, the god Macuilxochitl was considered to be participating in the game. To represent this, there is a special area near the game board reserved for offerings to Macuilxochitl. A player must place one of their treasures into this space each time their toss results in a score of zero (no holes showing). The winner of the round receives all the treasure from this space as a gift from Macuilxochitl.

The Spanish banned the game during the conquest because they considered it pagan and it was uncomfortable for the Crown’s finances because although the game could enslave someone, it could also generate great wealth and raise autonomous economic forms. The Spanish priests even have burned the hands of people caught playing the game.