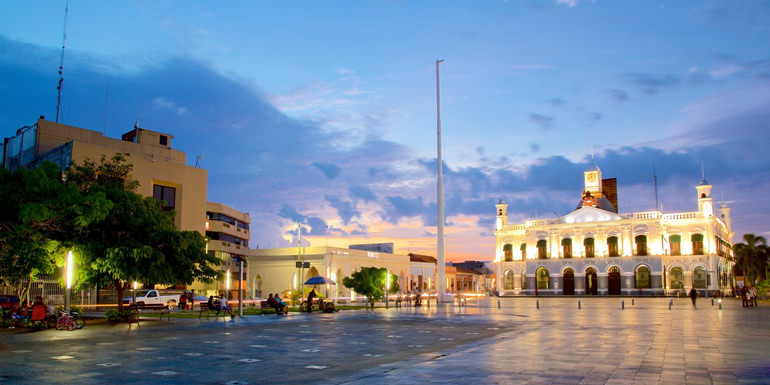 Tabasco’s political powers reside here. It is the main city of the state of Tabasco and is home to the state’s largest population. The city is an important business center for the Mexican oil industry.

In 2008, the city consisted of 33 colonias and fraccionamientos. Also known as La Esmeralda del Sureste (The Emerald of the Southeast), Villahermosa is a modern city rich in natural resources, in terms of both agriculture and farming.

Commercially, the city is served by major merchants, such as Liverpool, Fábricas de Fráncia, Palacio de Hierro, Walmart, City Club, Soriana, Comercial Mexicana, and Home Depot. All the major national banks are represented in the city as well.

Villahermosa is located in the southeast of Mexico between the rivers Grijalva and Carrizal. The average elevation of the city is 10 meters above sea level. The city also has several lagoons, the largest and most important of them being La Laguna de las Ilusiones (Illusions Lagoon).

Like most of Tabasco, Villahermosa has a tropical monsoon climate. Temperatures during spring and summer seasons can reach upwards of 40°C (104 °F), with humidity levels hovering around 30% during the same period (for total humidity-adjusted temperatures in the high forties). During its short “winter”, Villahermosa’s climate is very humid but daytime temperatures decrease to around 28°C (82 °F).

The most stunning season of the year is spring, as the flamboyán, guayacán, macuilis, and other tropical vegetation bloom and dress the city with a beautiful sense of joy along its major thoroughfares.

In October 2007, Villahermosa suffered its worst flood in recorded history. Several hundred thousand people were displaced because of flooded homes.

Founded officially on 24 June 1564 by the Spanish Diego de Quijada on the banks of the grijalvaa River under the name of Villa Hermosa, in 1826 the village was raised to the rank of city under the name of San Juan Bautista de la Villa Hermosa (Saint John the Baptist). During the French intervention in Mexico, French troops occupied the city in 1863. In 1916, the governor of Tabasco, Francisco J. Múgica, ordered the restoration of the city’s name to Villahermosa.

Today Villahermosa is a modern city in southeast Mexico and, possibly only after Mérida, Yucatán, it is the most important business and commercial point in the long stretch between Mexico City and Cancún.

La Venta Museum-Park, which includes a small zoo, has the most important collection of Olmec artifacts.

The city is served by several national air carriers as well as by a direct international flights to Houston via United Express and Panama City via Copa Airlines. Its airport, the Carlos Rovirosa Pérez International Airport, is operated by Aeropuertos del Sureste de Mexico (ASUR) and has recently seen a significant expansion. This airport was the destination for the 1929 Mexicana inaugural flight. The city is the closest destination to the ancient Mayan ruins at Palenque. Airlines providing flights to/from the airport are: Aeromexico, Interjet, United, VivaAerobus, and previously by the defunct Mexicana de Aviación. U.S.Airways now flies in there too.