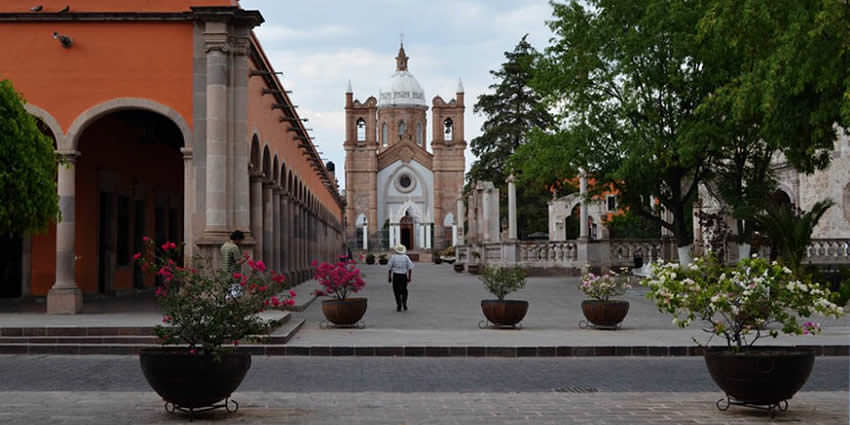 Nochistlán is a town in the Mexican state of Zacatecas.

Nuño Beltrán de Guzmán, on December 3, 1531, hired Cristóbal de Oñate to establish a village in Nochistlán; the village would be named Guadalajara to honor Guzmán for having been born in Guadalajara.

Guadalajara was founded in Nochistlán on January 5, having as officials Cristóbal de Oñate, Sancho Ortiz de Zúñiga and Miguel Ibarra. They worked at this project for only 16 months and created the first layout of Guadalajara.

The first news that we have regarding the natives of these lands points to the Tecuexe. These people established settlements around 1000.

Later in the 12th century a new group of people moved in, these people were called Caxcan and they were from the valley in Tuitlán, which is now found in the municipality of Villanueva, Zacatecas. The Caxcan established Nochistlán by driving out the Tecuexe by force.

Nochistlán was the fifth town to be named “Pueblo Mágico” in the state of Zacatecas.

To be nominated for this category, a town must have symbolic attributions, legends, history, significant cultural traditions, and attract tourists. Nochistlán met all of these requirements, which made it eligible to be taken into further consideration.

Nochistlán is known for its traditions as well as its music.

It is also often referred to as, “La tierra de los músicos” (“The land of musicians”).

Nochistlán has been given this nickname because within the town, there is always music playing. From Mariachi groups, to bands, as well as choirs, it is proud of their different styles of music and is not ashamed of them.

In fact, Nochistlán’s music is one of the main reasons tourists visit so much, aside from the beautiful architecture.

In addition, it is also one of the reasons it was named, “Pueblo Mágico” because of its music. Many of the musicians that form groups come from families that were also in musical groups, which explains why Nochistlán is such a musical place.

The oldest tradition in Nochistlán is “la fiesta del Papaqui” or translated as, “the party of el Papaqui.” This party is celebrated every year from January 12 to January 20.

El Papaqui is a celebration in which the whole town honors and venerates St. Sebastian. St. Sebastian is a very important figure to those who live and are from Nochistlán.
During these eight days, everyone walking in the plaza has their face covered with flour, and crack colored eggs filled with confetti on their heads.

They also throw oranges, These actions symbolize what was going on during the war between the Natives and Spanish.

The flour symbolizes the dirt people would put on their faces to create a more savage look. It is not most about war it is just to celebrate San Sebastián, the Saint most admired from that pueblo.

All the men of the town form a circle around the plaza while the women walk inside the circle. As the women walk inside the circle, if a man finds a woman attractive, in original tradition, he would give her a Gardenia flower (in most recent, modern tradition, he puts confetti in her hair, or hollowed out eggs with confetti inside) there is also another circle within the inner circle, where children and married women go around to get confetti too but also they are there so men know they are married or in a relationship.

This tradition originally began to honor women and moreover, to make them feel appreciated by men.

The Virgin of Toyahua is a respected figure in Nochistlán because she is known to grant miracles. Most of the residents of Nochistlán pray to her when they are in need of a marvel.

Although Nochistlán is small in size, it is big in religion. The feast of October are religious parties to honor St. Francis of Assisi that are celebrated on the first Sunday of October.

During these parties, people gather in the plaza to enjoy music from many bands and mariachi groups.

Aside from the music, even though the feast is meant for religious events, it’s just a big party with very famous bandas come and perform the parties will last from early 8:00 p.m. and sometimes carry on until 5:00 a.m. all the women in the town come together to make food for those participating in the celebration.

Nochistlán is a very rural place with active transportation.

Transportation in this town mostly consists of walking since everything is within walking distance, cars, buses, trucks, as well as horses.

Because of this, Nochistlan gives people a very welcoming and an all-original feeling that is unparalleled in a sense.

Most of the people who inhabit Nochistlan live by nature. That is, a lot of their resources are native, making Nochistlan somewhat old-fashioned.

Nonetheless, in recent years it has been modernizing their ways of living.