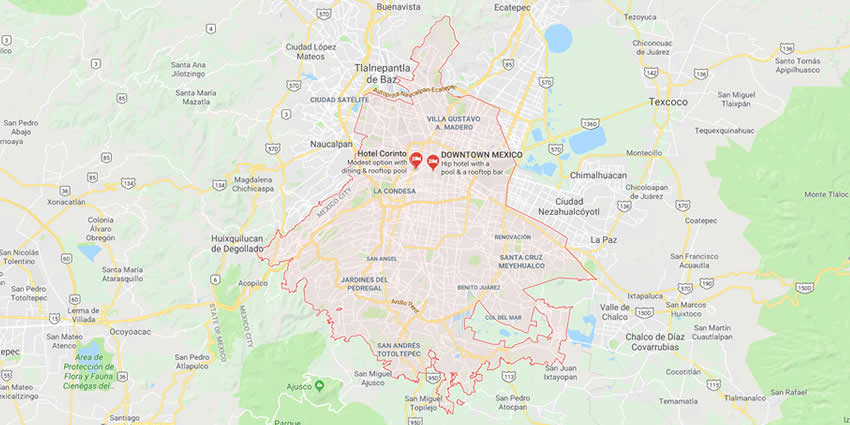 For normative purposes, however, Greater Mexico City most commonly refers to the Metropolitan Area of the Valley of Mexico (Zona Metropolitana del Valle de México) an agglomeration that incorporates 18 additional municipalities.

As of 2016 more than 21 millions people lived in Greater Mexico City, making it the largest metropolitan area in North America.

It is surrounded by thin strips of highlands which separate it from other adjacent metropolitan areas, of which the biggest are Puebla, Toluca, and Cuernavaca-Cuautla, and together with which it makes up the Mexico City megalopolis.

Since the 1940s there have been different proposals to establish the limits of the growing conurbation of Mexico City, and different definitions were used unofficially as the city continued to grow.

On January 29, 2016, Mexico City proper was no longer called the Federal District (“Distrito Federal” or D.F.). It is now in transition to become the country’s 32nd federal entity, officially “City of Mexico” (“Ciudad de Mexico” or CDMX), giving it a level of autonomy comparable to that of a state.

Because of a clause in the Mexican Constitution, however, since it is the seat of the powers of the federation, it can never become a state, or the capital of the country has to be relocated. The English name “Mexico City” remains. Its original 16 “Boroughs” became “municipalities”.

The term “metropolitan area” was coined and developed in the United States from the 1920s and is used most often to refer to a “large” city whose limits exceed those of the political-administrative unit that originally contained it; in the case of Mexico, this unit is the municipality.

The 49 of 125 municipalities of the State of Mexico

One conurbation municipality of the State of Hidalgo

Another way to visualize these municipalities is by their intrastate regions. The Mexico City Metropolitan Area fully covers 5 regions (regiones naturales) in Mexico State, partly covers another 5 regions, the Federal District, and 1 municipality in Hidalgo.

The following regions of Mexico State lie completely within this metropolitan area:

Metropolitan Area of the Valley of Mexico

The definition of the Mexico City Metropolitan Area is positive, in that all municipalities form a single conurbation. By contrast, the Metropolitan Area of the Valley of Mexico is considered a normative definition, in that it incorporates 18 additional strategic municipalities in the territorial administration of the region, even if they have not been fully integrated yet. Many urban projects, mostly related to the improvement of air quality and water sanitation, are coordinated for all constituent municipalities of this agglomeration. The majority of the population reports of urban areas in Mexico refer to this agglomeration, and not to the MCMA conurbation.

Originally, a system of interconnected lakes occupied a large area of the valley, of which Lake Texcoco was the largest. Mexico City was built on the island of Tenochtitlan in the middle of the lake.

During conquest of Mexico the dikes that protected the city from recurrent floods were destroyed and colonial authorities preferred to drain the water of the lake, which was, for the most part, shallow.

In 1900 president Porfirio Díaz inaugurated the Valley’s System of Drainage that hinders the growth of water bodies in the valley (and prevents floods). The basin of the valley of Mexico was thus integrated artificially to the Moctezuma river basin which connects to the Pánuco River.

The last remnants of the system of lakes are found in the boroughs of Xochimilco and Tláhuac, and in the municipality of Atenco.

The valley of Mexico is surrounded by mountains on all four sides creating a basin with only one small opening at the north, trapping all exhaust emissions of the city. At the southern part of the basin the mountain range reaches an altitude of 3,952 m (12,965 ft) above sea level; and to the east the volcanoes reach an altitude of more than 5,000 m (16,000 ft).

The region receives anti-cyclonic systems, producing weak winds that do not allow for the dispersion of accumulated air pollutants, produced by the 50,000 industries operating in Greater Mexico City and the 4 million vehicles circulating in its roads and highways.