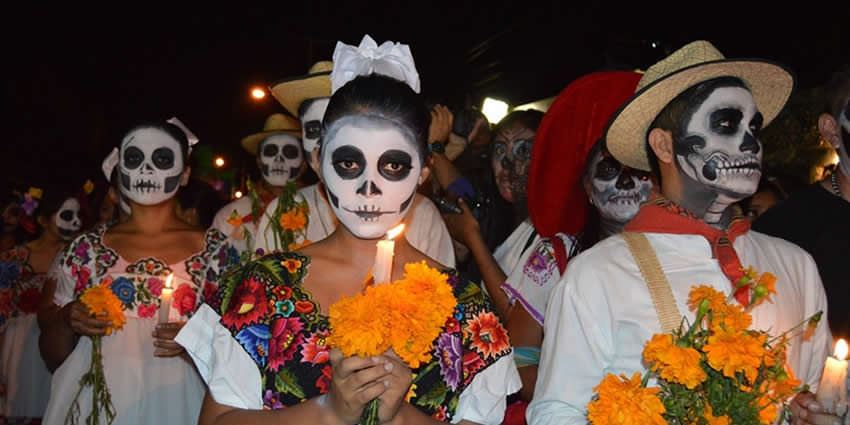 If you’ve ever been to Mexico City in October, you may have noticed a lot of skeletons paraded by Mexican women and men. It may seem like the city is decorated with Halloween decor – but it’s much more than that.

This religious tradition is rooted in ancient culture, and when translated into English, Santa Muerte means “the day of the dead”. This demonstrates how deeply Mexican culture honors their deceased people.

The celebration goes back thousands of years to Aztec Culture. People believed in ancestor worshiping so they would stay connected to their ancestors through these celebrations honoring them.

Mexicans do this because they believe that during October and November, the souls that passed away will visit their loved ones. So they do this to ensure they’re doing just fine in the afterlife.

There are several unique traditions in Mexican Culture when it comes to Santa Muerte:

The Dead are Honored with Special Altars

During this period, families of those who’ve passed would make a simple altar and adorn it with flowers. Incense mixed with the flower scent creates a pleasant smell meant to welcome the dead so they can spend some time with the living.

The altar often displays photos of the deceased and their favorite food. Most of these altars also have pictures of Our Lady of Guadalupe and Santa Muerte.

Special Mexican Food is Part of a Celebration

Many Mexican delicacies are served during this time of year. These include:

Chocolate Skulls: One tradition is making “chocolate skulls”. This chocolate candy has become very popular in Mexico because of its unique shape, which is meant to resemble skulls; they’re said to represent ones who’ve passed away.

Often decorated with crinkles and other designs made from bones, these tasty treats vary in flavor depending on where they come from or what ingredients were used.

Pan de Muerto Bread: Another tradition during this time of year is making “Pan de Muerto” (“Dead Bread”). It’s a traditional sweet bread that people eat on the Day of the Dead. You can easily find this bread in most Mexican grocery stores, supermarkets, and groceries in October.

Sugar skulls feature prominently during Santa Muerte. However, they’re not eaten. These are rock hard and made from sugar and meringue powder made into a paste and poured into the skull molds.

Once these sweets are set overnight, they are painted in different colors and decorated to make fascinating displays to represent the departed.

The Parades are the Climax

In modern-day celebrations throughout Mexico, many elements have been incorporated into this holiday, such as face painting and costumes which people will wear during parties or while participating in parades celebrating love and life.

Every year, people will go out on the streets and parade different skeletons mounted on puppets and surrounded by dancers. If you’ve never visited Mexico, this is the perfect opportunity to join in on all of the fun and celebrate Mexican culture.

Among the multitudes of spectators are beautiful Mexican women dressed to the nines, wearing traditional costumes and decorated in glitter. The women will usually dance and sing while they parade down the streets to various types of music.

The people who participate in this festival have a strong sense of community which you can easily see when looking at how everyone is dressed up together in costumes.

Mexicans seem to have gotten something right; the acknowledgment of death and celebration of life is very important. Since death is inevitable, it’s good to spend time honoring the deceased and loved ones once every year and appreciate the roles they played in society.