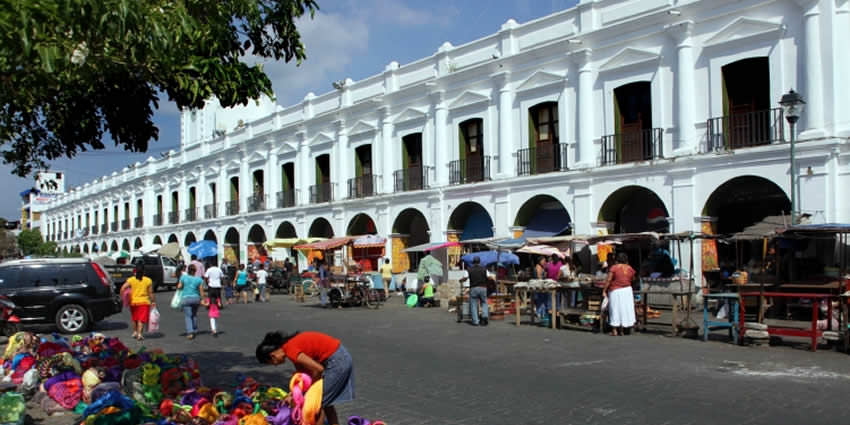 Juchitán de Zaragoza (in isthmus zapotec language “Xabizende”) is an indigenous town in the southeast of the Mexican state of Oaxaca. It is part of the Juchitán District in the west of the Istmo de Tehuantepec region.

With a 2005 census population of 74,714 inhabitants, it is the fourth-largest city in the state (just barely behind Salina Cruz). The majority of the indigenous inhabitants are Zapotecs and Huaves.

The town also serves as the municipal seat for the surrounding municipality, with which it shares a name.

Its Palacio Municipal dates back to the middle of the 19th century and perhaps is the widest “palace” in Mexico with 31 arches in its front portal.

To the west of the Palacio is a large market where local products can be seen and a local variant of the Zapotec language can be heard.

The people of Juchitán have led some local revolts over time: In 1834, “Che Gorio Melendre”, a native of Juchitán, directed a revolt against the government of Oaxaca, demanding the control of salt mines on the coast located at the southwest of Juchitán and for local autonomy of the county. The revolt was interrupted by the Mexican–American War in 1847.

Irregular troops commanded by Melendre joined the resistance against the invasion. After the invasion by the United States, the governor of Oaxaca, Benito Juárez responded to the local demands of Che Gorio Melendre on May 19, 1850 by sending troops to burn the city of Juchitán and to assassinate their leader Melendre.

On September 5, 1866, during the French intervention in Mexico, the indigenous people of Juchitán, Unión Hidalgo, San Blas Atempa, and Ixtaltepec defeated the Royal French Army stationed in Tehuantepec.

Most of the army of Porfirio Díaz, later the dictator of Mexico, were natives of Juchitán. José Fructuoso Gómez, nicknamed Che Gómez directed a 1910 revolt in support of the Mexican Revolution, allied with Zapata and Villa.

In the 1970s, a group of left wing students, workers and farmers organized with the intent of taking control of the local county through elections, instead of by force.

The violent history of Juchitán involves the strategic geopolitical location of the area, which is located on the Isthmus of Tehuantepec, the thin part of Mexico between the Pacific Ocean and the Gulf of Mexico.

The zone has been coveted by many countries since the McLane–Ocampo Treaty, which was signed in December 1859. Under the treaty, President Benito Juárez received a loan in exchange for the use of the isthmus of Tehuantepec by the United States. In the 1970s an attempt to resurrect the treaty, called the Alfa–Omega project, was aborted. In 2000, the project was finally approved as the Plan Puebla Panama.

Gamesa and Iberdrola are currently making important investments in Juchitán, to create a big wind power eolic park -called Proyecto La Venta II- able to produce at least 88 megawatts of energy. The project will make Juchitán the center of the alternative energies in Mexico becoming an example to the rest of Latin America as the eolic park would be the largest in all the region.

This project has been criticized because of the lack of information given by Gamesa, Iberdrola and the Mexican Government about its possible ecological, political and cultural consequences on a region where its culture is based on the property of the land used by the Proyecto La Venta II.

Citizens of Juchitán have also made contributions in the arts, such as painting, poetry, music, folk dance, and sculpture.

In May, residents celebrate the Fiesta de las Velas (Festival of the Candles) in honor of its patron saint San Vicente Ferrer, with a large procession.

Shortly before midnight on 7 September, the 2017 Chiapas earthquake struck off the coast of Chiapas, registered at either 8.1 or 8.2. The historic earthquake was said to be the strongest in a century in México.

Juchitán de Zaragoza, being on the Oaxacan coast, was one of the most damaged cities from the earthquake. Apart from whole streets getting destroyed, its 1860-built monumental municipal palace suffered a notable destruction, with a large part of the building completely collapsed. In the aftermath of the quake, a resident retrieved the national flag of Mexico and placed it on top of the rubble – the image quickly went viral and became a symbol of patriotism and national unity in the disasters-stricken nation.