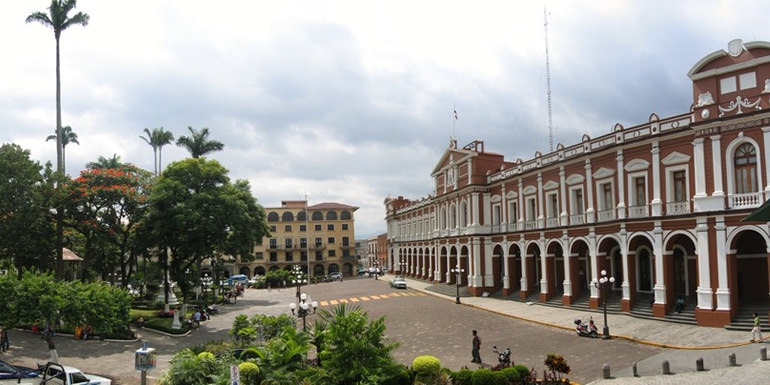 Córdoba, also known as Lomas de Huilango (Nahuatl Huilango) is an important point of the old commercial corridor from Mexico City to the Port of Veracruz. Córdoba is also known as the City of the Thirty Knights since it was founded by 30 members of important families in the region.

The city boasts of its historical importance, its colonial places and buildings, its cultural centers, parks, and its gastronomy. The city has a large number of entertainment centers, including billiard halls, ballrooms, and discothèques. Cordoba has three libraries, three auditoriums, a theatre, and a museum.

With a 2010 census population of 140,896, Córdoba is the fifth-largest city in the state, and also one of the top tourist spots in the region. Córdoba has a municipal area of 226 km. It is divided into 176 localities, of which the most important are San José de Tapia, las Flores, Miraflores, Los Naranjos, Brillante Crucero, el Porvenir, San Rafael Caleria, Santa Elena, San Miguelito, and San Nicolás.

Neighbouring cities are Naranjal, Fortín, Ixtaczoquitlán and Orizaba. The municipality has an area of 139.01 km2 (53.67 sq mi) and a population of 186,623, which includes that of many outlying small communities, the largest of which are San Román and Crucero Nacional.

Córdoba is located in the center of the state of Veracruz, at 18º51’30” north latitude and 96º55’51” west longitude. It lies between the hills of Matlaquiahitl and Tepixtepec, at an elevation of 817 meters above mean sea level.

Its climate is warm and humid, with an annual average temperature of 19.8 °C. There is abundant rainfall in summer and autumn, with little rain in winter.

The village of Córdoba was founded in 1618 by the Spanish to protect royal interests from attacks by Gaspar Yanga’s slave rebellion.

During the War of Independence in 1821, The Cordobans made resistance to the royalist forces of Colonel Francisco Hevia, in defense of the Iguala Plan and the Trigarante Army.

On August 24, 1821, Agustín de Iturbide, Chief of the Trigarante Army, and Juan O’Donojú, the last viceroy of New Spain, met in Cordoba to sign the Treaty of Córdoba, which established Mexican independence from Spain at the conclusion of the Mexican War of Independence.

The treaty was rejected by the Spanish government. Spain did not recognize Mexico’s independence for 15 years, until December 28, 1836 (when they signed the Santa María–Calatrava Treaty).

By decree of November 29, 1830, Cordoba was granted the political category of City.

By decree of 1880, the title of Heroic is granted to the city due to the defense before the Spanish royalist forces.

Cordoba was the capital of the State of Veracruz between 1916 and 1920, in the time of the governors Miguel Aguilar, Adalberto Palacios, and Cándido Aguilar.

In 1902 Córdoba became the interchange point of the narrow-gauge Córdoba and Huatusco Railroad to Coscomatepec.

The city was severely damaged by the 1973 Veracruz earthquake.

The city is composed of 15 barrios (Neighborhoods) bounded to the north by Ixhuatlán del Café and Tomatlán, and to the south by Amatlán de Los Reyes and Naranjal. The eastern area abuts Fortin de las Flores and Chocamán and the western area borders Amatlán de los Reyes.

Barrio de San Sebastián. It is the oldest neighborhood in the city and full of history. The battle of May 21 was here. It has architectural monuments such as the church of San Sebastián and the public Notary building.

Barrio de La Pitayitas. It is a colorful neighborhood full of old houses as well as having architectural monuments such as Palacio Fernández and other colonial-style houses, at the back, there are residential areas and the stadium of Beisborama.

One of Córdoba’s most important locations is its zócalo (main square). The square, called the Parque de 21 de Mayo, uses the traditional Spanish layout, with a church on the east side, the Palacio Municipal (city hall) on the west, and commercial establishments on the north and south sides.

The Cathedral of Cordoba

Beautiful construction of neoclassical architecture with a Florentine Tuscan style with French influence, it is a building that dates from the Porfirian era supplanting the old royal houses, has twenty arches that symbolize the heroic battle of May 21. Previously it manifested some zinc domes, but in its remodeling, they were eliminated and the central finish was changed by a neoclassical target. Inside is the municipal archive that is one of the best-preserved in the country.

It was built at the end of the 19th century, it is one of the first examples of Art Nouveau in Mexico since it has a very detailed French Caribbean architecture, it is currently a branch of a banking institution.

It was created between the seventeenth and nineteenth centuries and has a colonial style, is made up of three buildings which each houses the city museum, the municipal library, and the house of culture. It is also known as La Favorita because distinguished people in history chose this portal to stay: Agustín de Iturbide, Maximiliano and Carlota, President Benito Juárez and Salvador Novo.

Portal de Zevallos (Former Palace of the Counts of Zeballos)

Its original owner was captain José Manuel de Zevallos and conserves a colonial-style predominating stone, arches, and mud, it is the most important building in the city because it has been the scene of historical events, the most important being the signature of the Treaties of Córdoba and it is considered a national monument. Inside it houses in a beautiful mosaic the phrase that Agustín de Iturbide pronounced before the signing of the Treaties “Supposed the good faith and the harmony with which we conduct ourselves in this business, I think it will be very easy, which we untie the knot without breaking it ». It currently houses a famous restaurant where you can enjoy the view of the municipal palace and park May 21 while enjoying the traditional Cordovan coffee.

This convent was initially built by Ana Francisca de Irivas but never finished, after the Viceroy Miguel José de Azanza managed to conclude the religious education campus, it is a historic building because the Political Constitution of the State of Veracruz, this happened when Córdoba was the state capital on August 24, 1917.

It is a temple considered unique in the nation also because it has two flat vaults, it was built in 1686 for what makes it the oldest church in the city, it was used as a Franciscan convent but years later it was used as a military barracks and finally returned to work as a church.

It has French influence and its dome is made of bronze, also in its interior, the child of luck is venerated. It was used as a military barracks in the army of Francisco I. Madero but returned to the cult years later losing its altars.

It is the church that has changed its structure throughout history in the city, is neo-Gothic style, and consists of two towers that in turn were the tallest towers of the city, being surpassed later through the towers of the cathedral.

Of baroque style it only consists of a tower, its construction was a fire that collapsed a great part of its architecture, at the moment great part of the temple has a modern construction because much of the original structure was lost.

Hacienda that dates back to the year 1690 of use for ingenuity and plantation because in the area the sugar cane abounded and the coffee favored the production of said products and fortified the economy of the place, it is located in the Nuevo Toxpan neighborhood on the outskirts of the city.

This theater was built in 1889 and was inaugurated in 1896 keeping its original decoration until 1905, it was replaced by columns on pedestals and with a neoclassical bull’s-eye on the top, its facade is not perpendicular to its axis because it has its own horseshoe style of the Porfiriato.

Building of the Notary Public

It is a colonial building with a touch of baroque style and is considered the first public notary of the city, was founded in 1919 and is one of the few old buildings that are in use.

It is a building that dates from the time of the Porfiriato and the house of the pilgrim as it is also known was founded in 1927.

The sculptural monuments of Cordoba

There are children’s games in this park, a skating rink, a small open-air theater, and some monuments and a bust of Venustiano Carranza as well as the church with the same name of the park.

It is an ecological park designed to assist and live with nature, has a variety of vegetation such as coyol trees (hence the name of the park) has rustic games, and large green areas. In the park, there is a building with audiovisual and conference rooms for ecological issues.

It is a walk under a newly made bridge, where you can enjoy nature and tropical vegetation, in addition to the river itself.

It is a place of great beauty located on the outskirts of the city in the Toxpan neighborhood, where the archaeological ruins of the same name are located, it will soon be converted into a theme park for the use of the inhabitants and tourists that arrive at the archaeological zone.

In 2011 the remodeling of the Alameda Murillo Vidal was carried out and now it has a Gym for Older Adults, Minigolf, a Palapa and Pool.

It takes place every 2 years in different venues in the city of Córdoba, although it has already been extended to Veracruz and Xalapa as a special gala. It is part of the Youth America Grand Prix and attracts representatives of the best dance schools worldwide.

It takes place every year in August in honor of the Cordovan playwright Emilio Carballido Fentanes. Within the framework of this festival, there are presentations of books, orchestras, opera, dance, dance, painting, film, and photography.

It is held every year in celebration of the signing of the treaties that gave freedom to Mexico from Spain. Its main venues are the Pedro Díaz Theater and the cultural center “Los Portales”.

From 1902 to 1953, Córdoba was served by the Córdoba and Huatusco Railroad narrow gauge railroad. The line operated as a unique and scenic 2 ft (610 mm) gauge branch of Ferrocarril Mexicano from 1909 through 1951.