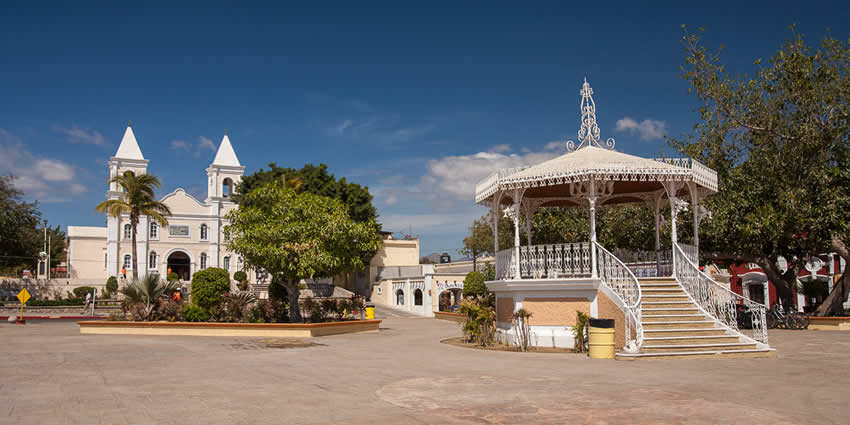 San José del Cabo (Saint Joseph of the Cape) is a city located in southern Baja California Sur state, Mexico. It is the seat of Los Cabos Municipality lying at a shallow bay 32 km northeast of Cabo San Lucas on the Gulf of California.

The town of San José del Cabo is located at the foot of the Sierra de la Laguna, 130 km SSW of La Paz, the state capital of Baja California Sur.

Although it is the seat of government for the municipality of Los Cabos, it is smaller than the other city of Cabo San Lucas. However, because of federal and private investments in tourism, its growth is now rivaling that of the more famous resort area.

The two cities are served by Los Cabos International Airport.

This growth has been regulated outside of the town center, especially to the south where the beaches are, leaving the historic town center quiet and relatively unchanged.

There are still cobblestone streets, adobe houses, jacaranda trees, and a central square in front of a church that dates from the 1700s, where people still gather in the evening when it is cooler.

A number of the large houses in the center date from the 19th century, and most of these have been converted into restaurants, art galleries, and shops selling everything from fine handcrafts, silver, local gemstones, and souvenirs.

The art scene in the town is well-developed because of tourism and people with vacation homes. These shops carry high-end paintings, and sculptures from traditional Mexican, Mexican contemporary, and international artisans and artists.

During the high season from October to May, these galleries stay open late into the night.

The town has resisted the addition of large shopping malls and chain stores.
There is also some colonial-era architecture as well, but this style has more in common with colonial towns to the north of the United States rather than the center and south of Mexico.

The main example of colonial architecture here is the town’s parish church. It was part of the Estero de las Palmas de San José del Cabo Mission, founded in 1730. The facade is marked with a tile mural depicting the martyrdom of founder Nicolás Tamaral, killed by the local Pericu people.

The patron saint of the town is Saint Joseph, whose feast day is celebrated here on March 19. Another important occasion is the feast of the Our Lady of the Pillar on October 12.

Occasions like these are marked by a traditional dance in dress styles known as “Flor de Pitaya” and the “La Cuera”.

Other important landmarks in the town include the Municipal Hall (Palacio Municipal), which dates from 1981, and the cultural center of Casa de Cultura, housed in a 19th-century building.

The tourist area of the town is the area between the town proper and the shoreline. This area has a nine-hole golf course and a line of hotels and resorts facing the ocean, which served over 900,000 hotel guests in 2011.

The Mission San José del Cabo was founded in 1730 on the west bank of the nearby Río San José.

The Río San José flows into an estuary, the largest body of fresh water in southern Baja, after flowing largely underground for 39.1 km from its origin in the Sierra de la Laguna (Laguna Mountains).

For more than 250 years it has furnished drinking and irrigation water for the town of San Jose del Cabo, beginning as a source of fresh water for Spanish galleons traveling back from the Philippines.

The river used to flow above ground until the beginning of the 20th century due to anthropogenic causes.

San José del Cabo is one of two places where the rare and possibly extinct rice rat Oryzomys peninsulae have been found.

San José del Cabo, like almost all of the Baja California peninsula, has an arid climate although it does receive more rainfall than most areas further north due to tropical cyclones occasionally coming in from the south and bringing very heavy falls such as 340 millimeters on the first of September 1998 and 316 millimeters on 3 November 1993.

Overall, however, rainfall is some of the most erratic anywhere in the world due to this influence, and many years pass by without significant falls at all.