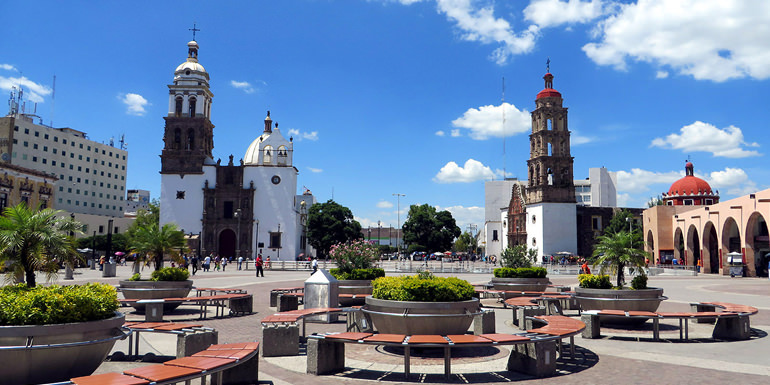 Irapuato is a Mexican town (and municipality) located at the foot of the Arandas Hill (cerro de Arandas), in the south central region of the state of Guanajuato. It lies between the Silao River and the Guanajuato River, a tributary of the Lerma River, at 1,724 m (5,656 ft) above sea level.

The city’s main industry is agriculture and it is famous for its strawberries and the raising of pigs and cattle.
The fruits and flowers of Irapuato’s luxurious gardens are well known throughout Mexico.

In the pre-Hispanic era, the site was inhabited by the Chichimecas (c. 1200 AD), a group of semi-nomadic hunter-gatherers.

Later on, the Purépechas conquered the region and initiated the establishment of a permanent settlement. They constructed buildings in the Purépecha architectural style, produced pottery, and practiced agriculture. They called the settlement Xiriquitzio (or Iriquitzio), which the Spanish conquerors pronounced “Jiricuato” (or Jiricuicho), which meant “the place with houses (or low dwellings)”.

The initial growth period, however, was short lived. The downfall of the Purépecha Empire led to the abandonment of the settlement, at which point it was once again inhabited by the Chichimecas.

In the 16th century, vasts amounts of silver ore were discovered at the present day site of the capital city of Guanajuato.

This discovery led to a massive migration of Spanish settlers to the area.

Fountain of Dancing Water (Fuente de Aguas Danzarinas): The fountain, which was inaugurated on December 21, 2004, stands in the central plaza of Irapuato. Every night there is a light, music and water show. The fountain is lit up in a rainbow of colors, and the jets provide a choreographed show accompanied by music.

Irapuato Zoo (Parque Zoológico de Irapuato): The Irapuato Zoo, which is located on the outskirts of the city, is home to 103 mammals, 271 birds, and various species of fish. The zoo was established in 1992 by engineer Emilio Tome Elias and architect Vicente Cázares Rodriguez, with the support of the then state governor, Carlos Medina Placencia.

Plaza Cibeles Mall (Plaza Cibeles): This is the newest and largest mall in the city of Irapuato. The mall contains many stores such as the Liverpool chain, and a Cinépolis movie theatre. The mall was named after the famous Plaza de Cibeles, a famous square in Madrid, Spain, which features a beautiful sculpture and fountain that have been adopted as a symbol for the city of Madrid.

John Paul II Monument (Monumento al papa Juan Pablo II): Bronze statue of Pope John Paul II, located in the Miguel Hidalgo square next to the Irapuato Cathedral. The statue was made out of keys that were donated by all of the people of Irapuato. The bronze sculpture has a steel skeleton and has a weight of 300 kg (661 lbs). It was unveiled on February 15, 2006.

Irapuato Cathedral (Catedral de Irapuato): The cathedral was built in the 16th century in the baroque style. The outside facade is also baroque. The interior is in the neoclassical architectural style. The cathedral is laid out in the traditional Latin Cross style.

Miguel Hidalgo Square (Plazuela Miguel Hidalgo): A large public square in the historical center of Irapuato. The square contains the Fountain of Dancing Water as well as the Irapuato Cathedral. The square is named after Miguel Hidalgo y Costilla, the father of the Mexican Independence movement.

Little Hospital Church (Templo del Hospitalito): This was the first church built in lrapuato. The interior was completed in 1713 and the facade in 1733. It is baroque in style and dedicated to the Lady of Mercy (Señora de la Misericordia). The church is built in the traditional Latin Cross style. The main altars contain images made from corn paste. The church was originally built as a chapel for the Indians’ Hospital (in Spanish: Hospital de Indios), which was built two centuries earlier by Vasco de Quiroga in 1550.

Dolphin (or Florentine) Fountain (in Spanish: Fuente de los delfines (o Florentina)): In 1864, Maximilian I of Mexico donated three bronze Florentine fountains to the state of Guanajuato. These fountains are located in lrapuato, Léon, and the city of Guanajuato.

Sergio Leon Chávez Stadium (Estadio Sergio Leon Chávez): Current home of Irapuato FC. It was one of the stadiums used in the 1986 FIFA World Cup. It has a maximum capacity of 32,000 spectators.

Sun Clock (in Spanish: Reloj del Sol): The clock is over a century old and it is located in the Juan Alvarez Square. The clock is elevated on a pedestal and column.

Canyon of the Bats (in Spanish: Cañon de los Murciélagos): It is located outside the city of Irapuato in the Sierra de Pénjamo. It is home to thousands of bats, but it is open to the public for hiking and other activities. The terrain is rugged and depending on elevation, vegetation varies from low evergreen rainforest to rainforest that loses its leaves each year. The area also contains waterfalls and natural pools.

Irapuato is a 2 or 3 hour flight from cities including Los Angeles, Houston, Dallas, Mexico City, Monterrey, Guadalajara and Puerto Vallarta, among others.

It handles national and international air traffic of the area that includes the city of León, the city of Irapuato, and the state capital, Guanajuato. Guanajuato International Airport is an important connecting point for some flights from Mexico City to the United States.

Major highways in Irapuato and their starting and ending points: