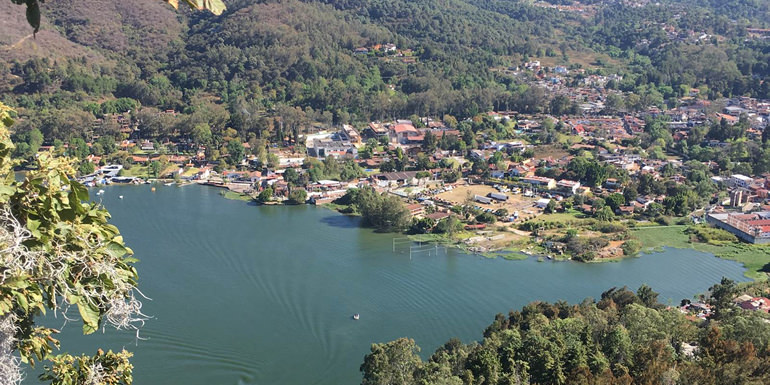 Valle de Bravo is a town and municipality located in State of Mexico, Mexico. It is located on the shore of Lake Avándaro, approximately 156 km southwest of Mexico City and west of Toluca.

It takes about 2 hours to drive from Mexico City to Valle de Bravo, making it a popular weekend getaway for the capital’s affluent upper class.

The original names including Temascaltepec caused confusion with the nearby “Real de Minas de Temascaltepec”, now Temascaltepec, so the county was known as “El Valle” (The Valley).

The honorific “de Bravo” was added later to recognize Nicolás Bravo who fought at the Castle of Chapultepec during the Mexican-American War.

Its glyph includes the image of a temascal in reference to its original name.

The town and the surrounding area are well known in Mexico as a tourist destination, mainly because it is only 2 hours away from Mexico City and for having hosted the world-famous events Circuito Avandaro (auto racing event) and Festival de rock y Ruedas (a massive rock music festival).

These elevations include a number of small volcanoes such as the “Cerro Gordo”.

The main river of the area is the Río Balsas, whose system includes the tributaries of El Salto, Barranca Honda, Tiloxtoc rivers.

The municipality still has indigenous communities with Nahuas, Matlatzinca and Purépecha and their languages can be still heard.

The first to arrive to the area were the who settled mostly in the present-day communities of Santa Maria Ahuacatlán, La Peña and Otumba.

Between 1474 and 1479, the Aztec chief Axayacatl conquered the region, establishing what it would be the last addition to the Aztec Empire.

After the destruction of Tenochtitlan by the Spanish, campaigns to subdue this area were carried out by Andrés de Tapia and Gonzalo de Sandoval, followed by evangelization by the Dominicans and the Augustinians.

Between 1607 and 1615, a Franciscan convent was established here, giving the town that grew up around it its original name of San Franciscano del Valle de Temascaltepec.

The town suffered greatly during the Mexican War of Independence due to the monarchy’s attempts to repress the rebellion there.

Another short-lived rebellion occurred in 1834 when Carlos Guadalupe Tepixtoco Abad proclaimed his plan to re-establish the empire of Moctezuma. However, most people considered the cause to be ridiculous and the movement quickly died out.

In the 20th century, the geographic configuration of the landscape changed.

In 1937, the Federal Commission on Electricity began plans for an electrical plant called Ixtapantongo, later called the “Miguel Alemán” hydroelectric system. Construction began in 1938 and ended in 1947 ending with a Villa Victoria Dam that flooded 2,900 hectares, creating the current reservoir which extends all the way to the state of Michoacán.

The electrical plant generates 458,775 kilowatts per hour and forms a part of the water system supplying Mexico City. The town is situated on a small plateau at the foot of several hills at the edge of this lake.

During the 1960s the place became world-famous for its auto racing event Circuito Avandaro which was suspended in 1969 after pilot Moisés Solana’s fatal accident.

On September 11–12, 1971, Valle de Bravo became the Mexican Woodstock as a large gathering of between 200,000 and 300,000 hippies from all over the country, Central and North America arrived in town to take part in the massive Festival de rock y ruedas Avandaro held in the hamlet of Tenantongo.

As of 2005 it had a population of 22,166. The dam is actually a series of dams named Valle, Tilostoc, Colorines, Ixtapantongo and the newest at Santo Tomás de los Plátanos.

With the creation of the lake came the development of exclusive resort facilities such as hotels, golf clubs, country cabins, sailing clubs and a myriad of restaurants.

Temple of Santa María Ahuacatlán was originally a chapel when it was started in 1864 but has been converted into a church which is still under construction.
The main altar contains a Black Christ which is still worshipped. Inside the church are extremely large canvases by Phillippa, an English artist who was recently commissioned. These canvases depict the relationship between Mazahua legend and the Black Christ.

The Parish of Saint Francis of Asisi used to have two very large naves constructed by the Franciscans, one nave for the Spanish and one for the indigenous people. All that is preserved from the 17th century are the baptismal font, the holy water font and a carving of Saint Francis which is located in a vaulted niche in the present-day main nave. Other, more recent features of the church include murals and Italian oil paintings. The main bell was cast during the Mexican Revolution. The third and main nave was constructed in the 1950s in which all residents of the town participated; however, this project was not terminated until 1994.

The Casa de la Cultura (House of Culture) is located in front of the municipal dock on Lake Avandaro. Classes are given there in activities such as aerobics, music and painting to children and adults. It also hosts conferences and workshops on natural medicine as well as art expositions. The complex includes a library, a ballroom, a cafe, exhibition rooms and an auditorium. Also, the workshop of painter Ismael Ramos is found here.

The Joaquín Arcadio Pagaza Museum is dedicated to the conservation, research and spread of the region’s cultural history. It features objects that were the property of Don Joaquín Arcadio Pagaza, a notable person here. It displays paintings and sculpture from local, national and international artists. It also supports literature by sponsoring conferences, films, theatre and other events. It also offers courses and workshops in fine arts, music and literature as well as a library.

The Municipal Boardwalk and Dock, on the edge of Lake Avandaro, is the main attraction in the town. There are a number of restaurants on the boardwalk and some that float alongside the dock. On weekends, artists display and sell their work here. Boats for excursions on the lake can be rented here as well as horses. It’s an artificial lake where you can practice water sports and enjoy trips on a yacht or on a boat. On the banks of this river there are more than 42 nautical clubs. It is great for navigation, sailing, and water-skiing.

The Jardín Central (Central Garden) is located on the side of the Parish of San Francisco. There is live music at the bandstand on Sunday afternoons and street food such as corn, campechanas, tacos, pambazos and traditional ice cream for sale. A bust of Nicolás Bravo, for whom the town was named also stands in this location.

One major sport In Valle is paragliding. The Fédération Aéronautique Internationale designated Valle to be the host of the 2009 World Championship, with 150 competitors from more than 40 countries. The Monarca Paragliding Open, an annual paragliding winter competition held in Valle de Bravo and Temascaltepec, will have the ninth edition in January–February 2011. In addition to paragliding, ultralight flying is popular. Age is not a factor in who can participate; however, first-time fliers do so in tandem.

Also to the north is the village of La Peña, which is on a high peak above the treeline. Here are some archeological remnants of Mazahua and Matlatzinca origin.

Just outside it is the Velo de la Novia (Bride’s Veil) waterfall, where the San Juan creek drops 35 meters in the middle of relatively untouched forest. The area has been converted into a natural park.

The Maranatha Retreat lies just to the north of Valle de Bravo. It used to be a Carmelite convent, but today it is open to people of all faiths. It was built in the 1860s and 1870s by Father Miguel Angel Perez Alonso fusing elements of Byzantine, Mediterranean, Mexican Baroque and Asian architecture.

Valle de Bravo also lies in the wintering grounds of the monarch butterfly. Piedra Herrada, located 25 km east of the town on the north side of the Los Saucos highway, is a federal reserve for the protection of the butterflies. In this sanctuary, visitors can rent horses to explore the sanctuary as well as a guide. The butterflies can be found all winter long at the top of the mountaintop in the abundant fir trees.

Just south of the town of Valle de Bravo is a small village called Avandaro, which hosted the “Rock y Ruedas” festival in September 1971.

Holidays such as New Year’s Eve and Semana Santa bring large numbers of visitors to the town leading to strong recommendations to arrange lodging well in advance.

Other yearly events include the Festival Vallesano (March) where people participate in sporting, horseback-riding, art exhibitions and food-tasting events as well as cultural and musical performances.

However, the largest annual celebration is the cultural festival known as the Festival de las Almas (Festival of the Souls) which has occurred each of the last five years in late September or early October.

The 2007 festival brought in 4.5 million pesos to the area with 8 days of festivities, 151 programmed events centered on film, dance, art exhibitions, music, literature, workshops and theater, as well as Day of the Dead altars. It has spread to include events in Apaxco, Cuautitlán Izcalli, Ciudad Nezahualcóyotl, Temascalcingo, Texcoco and Toluca. This event featured “Alan” State Dance Troupe from Ossetia Alania, Russia as well as artists from thirteen other countries. Roughly 160–170,000 people attended the event.