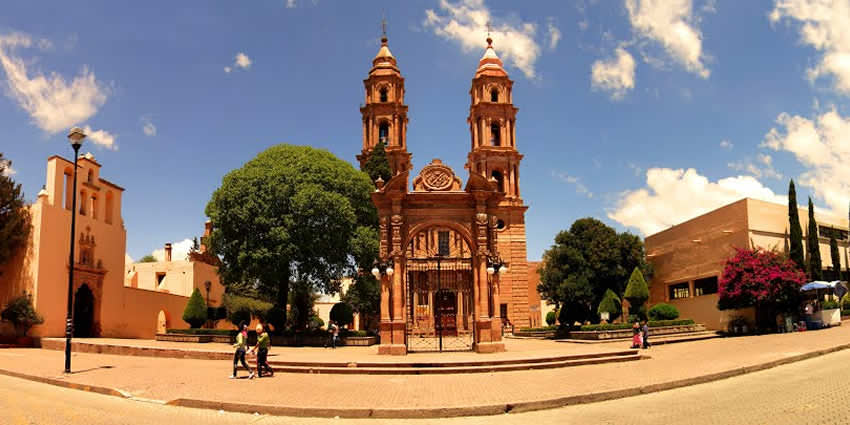 San Luis de la Paz, and its surrounding municipality of the same name, is a city located in the northeastern part of the state of Guanajuato in Mexico.

A charming city with great historic and cultural wealth, was founded on August 25, 1552, as a defensive town on the Spanish Silver Road, which linked the Zacatecas mines with Mexico City during the Spanish domination.

It owes its name to the peace treaty between Otomi Indians, who were Spaniard allies, and the native Chichimecas, on the day of Saint Louis of France, August 25. The Chichimeca Nation, as it is also known, is an attractive tourist centre.

The city serves as the seat of the municipality. At the Mexican census of 2009, the city had a population of 109,000 inhabitants.

Its largest other community is the town of Misión de Chichimecas.

Before the Spanish conquest, its territory was inhabited by Chichimeca Indians, fearless nomad warriors who were never completely militarily defeated by the European intruders.

It was home to the first Jesuit mission in Mexico, under whose administration it became a thriving mining, agricultural, and cattle raising centre during Colonial times.

Its mining support services reached their height during the Mineral de Pozos bonanza at the end of the 19th century.

During the first half of the 20th Century it suffered from the instability of the Mexican Revolution and Cristero War.

In the 1970s and 1980s, the economy was reactivated due to a new agricultural boom. At present, however, San Luis de la Paz is undergoing a recession and is seeking ways to diversify its economy.

The main festivities and events include The Encounter Ceremony, the Regional Fair, the Virgencita Celebration, and the Processions to Our Lady of Guadalupe.

Mineral de Pozos, the sister community, offers a variety of interesting celebrations like: The Festivity of Our Lord of Labor, the Toltequidad Party, and The Mariachi Festival.

Gorgeous and resourceful hand-crafted products, like wool articles and Pre-Columbian musical instruments, are made in San Luis de la Paz and Pozos respectively.

Moreover, the Chichimeca Mission, the last of this ethnicity in Mexico, in spite of the globalization, has undertaken to safeguard its language, Chichimeco-Jonaz, as well as the elaboration of the symbolic chimal.

San Luis de la Paz, with its colonial elegance and narrow streets, preserves to date unique places and buildings that speak of its fascinating past. They range from native rock paintings in nearby hills, the remains of antique cobblestone Spanish roads, to forgotten chapel ruins and old structures.

Mineral de Pozos, the most important mining town in the state of Guanajuato, dating back to between the end of the 19th century to the beginning of the 20th, is just like a film set. It is amazing to see the deserted and rundown remains of ancestral constructions everywhere, like the Jesuits’ Mining Ovens and the Modelo Schools.

Vergel de Bernalejo is an Eden: it’s a place with wonderful natural scenery and caves that house marvellous stalactites and stalagmites.

There is also a forest with many varieties of trees such as pine and fir, home to wildlife such as deer and eagle. It is surrounded by many mountains and rock formations, like the Bernalejo hill and the Bridge of God.

The Paso de Vaqueros Canyon is 30 minutes outside the town of San Luis de la Paz. Here, the Manzanares and San Juan Rivers cross the landscape having not only carved the canyon giving it its characteristic steep walls, but they are also subsidiaries to a number of waterfalls along the canyon.

Paso de Vaqueros is sought for rappelling, bungee jumping, swimming, rock climbing and hiking. In the municipality of San José Iturbide, on the highway to Tierra Blanca, the El Salto Hacia la Libertad (Leap Toward Freedom) adventure park is located, in a small valley with a lake in an arid area with desert vegetation.
Visitors can rappel, hike, parasail and more.