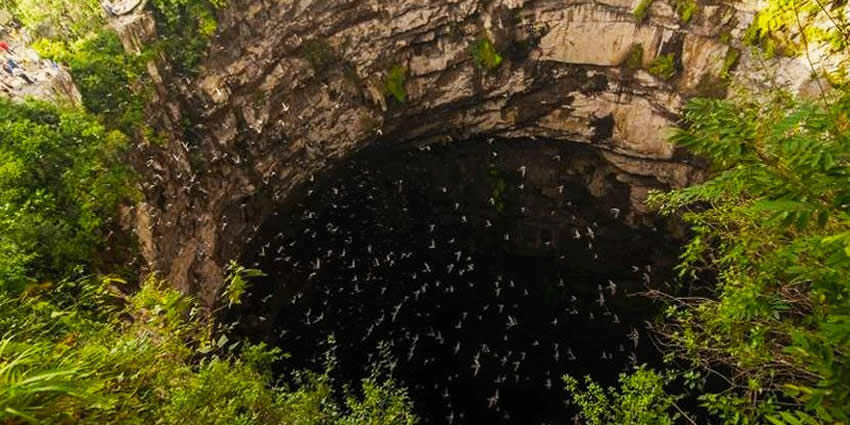 The elliptical mouth, on a slope of karst, is 49 by 62 m wide and is undercut around all of its perimeters, widening to a room approximately 303 by 135 meters wide.

The floor of the cave is a 333-meter freefall drop from the lowest side of the opening, with a 370-meter drop from the highest side, making it the largest known cave shaft in the world, the second deepest pit in Mexico, and perhaps the 11th deepest in the world.

The cave has been known to the local Huastec people since ancient times. The first documented descent was on 27 December 1966 by T. R. Evans, Charles Borland, and Randy Sterns.

The cave is formed in the El Abra and Tamabra formations, limestones of the Middle Cretaceous age. The cave’s speleogenesis is still not fully known but is a result of solutional enlargement along a vertical fracture, with subsequent vadose enlargement.

The place owes its name due to the many birds which live in holes in the cave walls. These are mostly white-collared swifts and green parakeets, but actual swallows are in fact rarely found here.

Each morning, flocks of birds exit the cave by flying in concentric circles, gaining height until they reach the entrance.

In the evenings a large flock of swifts circles the mouth of the cave and about once each minute, a group of perhaps fifty breaks off and heads straight down towards the opening.

When they cross the edge, the birds pull in their wings and free-fall, extending their wings and pulling out of the dive when they reach the heights of their nests. Watching this has become popular with tourists.

Temperatures in the cave are low. Vegetation grows thickly at the mouth, The cave floor is covered with a thick layer of debris and guano.

From the floor at the bottom of the shaft, there is a series of narrow pits known as The Crevice, totaling about 140 m, which brings the total depth of the cave to 515 m.

The cave is a popular vertical caving destination. Cavers anchor their ropes on the low side, where bolts have been installed in the rock and the area is clear of obstructions. Rappelling to the floor can take up to an hour.

Climbing back out may take from forty minutes to more than two hours. A person without a parachute would take almost ten seconds to freefall from the mouth to the floor, hence the pit is also popular with extreme sports enthusiasts for BASE jumping.

An average-sized hot air balloon has navigated through the 49 m wide opening and landed on the floor below. BASE jumpers can get out in about 10 minutes using a winch.

The Cave of Swallows on Google Maps