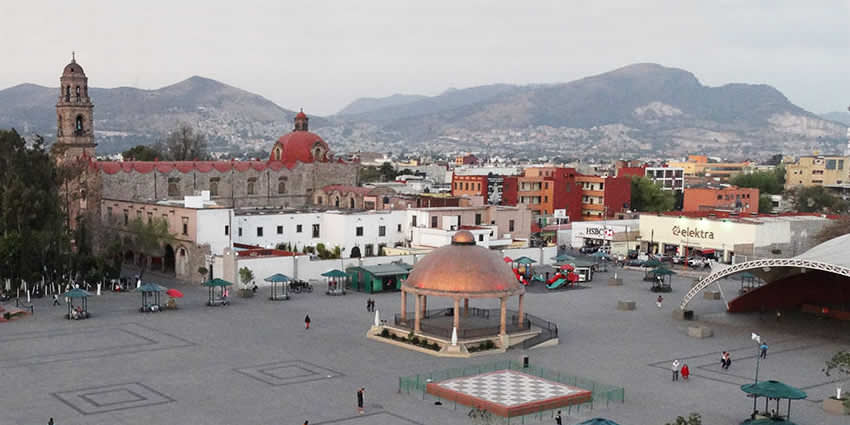 Tlalnepantla de Baz (better known as Tlalnepantla, and incorrectly called “Tlanepantla”) is a city and a municipality of the state of Mexico, north of Mexico City (Ciudad de Mexico).

It is located in the northeastern part of the state of Mexico, in the Valley of Mexico north of Mexico City proper. Together with Atizapan, it comprises the dense Region XII (Mexico State) of Mexico State.

Tlalnepantla is a big modern city with an important mall (Mundo E) and hotels. The population as of the 2010 INEGI census was 653,410 people, representing 98.37% of municipal population.

Tlalnepantla comes from the Náhuatl words tlalli (land) and nepantla (middle) to mean the middle land.

The current addition of “de Baz” comes from the last name of Gustavo Baz Prada, an important politician and soldier of Emiliano Zapata’s army during the Mexican Revolution. After the Revolution, Baz Prada became Governor of the State of Mexico and President of the National Autonomous University of Mexico (UNAM).

Around the 11th century, a people called the Amaquemecan (after whom the municipality of Amecameca is named), migrated to this area following their leader Xolotl to look for a better climate and more food to sustain themselves.

This same Xolotl founded the Tenayuca Oztopolco chiefdom and made the first census ever in the Americas. The Acolhuas, Tepanecas and Otomis were already established in this land so alliances were made.

Despite this, the region eventually was conquered and made a tributary of the Aztec empire.

After the Spanish Conquest, the area was evangelized by the Franciscans.

The founding of modern Tlalnepantla was the result of a dispute between the towns of Tenayuca and Teocalhueyacan as to which should be the site of Franciscan monastery and religious center for the area. The result was to place the monastery at the midpoint between these two towns, and hence the name (middle land).
This monastery, named Corpus Christi was built in 1550.

After independence, Tlalnepantla was originally part of Mexico City, but in 1825, it was recognized as a district of the State of Mexico.

During the Presidency of Porfirio Díaz Mori, Tlalnepantla began industrial development, and in the 1950s underwent a demographic explosion after being declared a city in 1948.

The church and monastery of Corpus Christi was built by both Mexicas and Otomis of pink and gray stone. The side gate, called the Porciúncula, shows clearly the influence of both these peoples.
In 1963, the church gain cathedral status.

The aqueduct that extends from Tlalnepantla to Villa de Guadalupe as well as the Caja del Agua are works that date from the colonial period.

The Hacienda of Santa Mónica and the Hacienda de Emmedio are well-preserved.

The Centro Cultural Sor Juana Inés de la Cruz has a collection of 130 fotografías del Tlalnepantla from the end of the 19th century to 1960 as well as other historical objects.

The pyramid at Tenayuca is a smaller version of the Templo Mayor the Aztecs built in Tenochtitlan. It has dual staircases on the west side, each leading to two temples, at the top of the pyramid. One was dedicated to Tlaloc and the other to Huizilopochtli. Serpent sculptures surround the pyramid on three sides and are possibly of pre Aztec origin.
A small museum on the grounds holds artifacts diagrams and models of the site and the history that surrounds it.

Another, smaller pyramid is at Santa Cecilia Acatitlan, just north of Tenayuca. This one was rebuilt as the original was destroyed and some of it blocks were used to build the Santa Cecelia Parish church that is next to it. This pyramid has one staircase one temple atop.
On the plaza is the Herpes Museum, which houses a small collection of pre Hispanic sculpture.

As well as the Periférico and the Mexico-Querétaro Freeway with 15 lanes in Tlalnepantla. (This is a section of Mexican Federal Highway 57, the Pan-American Highway.)

Tlanepantla is well served by the local pesero, intercity bus network and the suburban train.