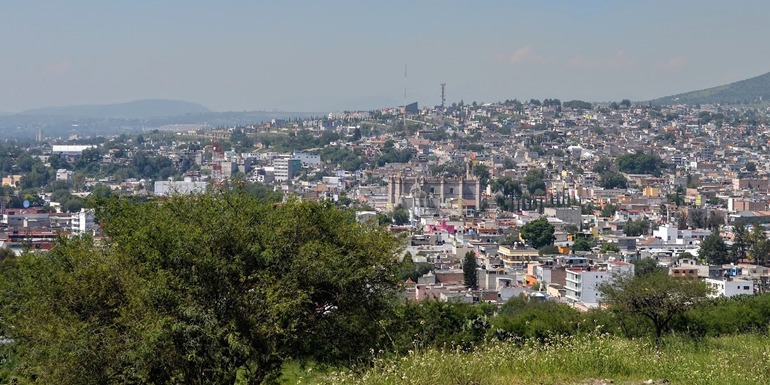 Tula de Allende (Otomi: Mämeni) is a town and one of the 84 municipalities of Hidalgo in central-eastern Mexico.

The municipality covers an area of 305.8 km² (118.07 sq mi), and as of 2010, the municipality had a total population of 103,919. The municipality includes numerous smaller outlying towns, the largest of which are El Llano, San Marcos, and San Miguel Vindho. It is a regional economic center and one of Mexico’s fastest growing cities.

However, it is best known as the home of the Tula archeological site, noted for its Atlantean figures. Its built-up area made up of Atotonilco de Tula, Atitalaquia, Tlaxcoapan municipalities was home to 188,659 inhabitants at the 2010 census.

The most important museum in the municipality is the site museum for the Tula archeological site called the Jorge R. Acosta Museum, which is run by INAH.

The municipality is located in the south of the Mezquital Valley in the southwest of the state of Hidalgo. With an extension of 305.8km2 it borders the municipalities of Tepetitlán, Tlahuelilpan, Tepeji del Río, Atotonilco de Tula, Atitalaquía and Tlaxcoapan, with the State of Mexico to the west.

The city of Tula has an altitude of 2,020 meters above sea level Most of the municipality is semi flat with only one significant elevation completely in the municipality known as Magoni. Elevations in the west form the border between it and the State of Mexico. These include Magueni and La Malinche. In the north there is a small mountain of volcanic origin called Xicuco.

Surface water is mostly found in the Tula River, the Rosas River and the Arroyo Grande, whose waters are stored in the Endho Dam. The Tula River begins with the discharge from the Valley of Mexico which pass north through the State of Mexico before reaching the area. The Rosas River also begins in the State of Mexico but with clean waters from a fresh water spring. It has carved some small canyons in the area.

The name is derived from the Nahuatl phrase Tollan-Xicocotitlan, which means near where cattails grow. Tula is the Hispanicized pronunciation of Tollan. In Otomi the area is called Namehi, which means “place of many people.” It was given the appendage of “de Allende” in honor of Ignacio Allende who fought in the Mexican War of Independence.

The area was the capital of one of the major civilizations of Mesoamerica, that of the Toltecs. The Toltecs rose to power after 713 CE as the successor to Teotihuacan. The current city is centered just south of the ceremonial center of the ancient city, which is famous for its Atlantean figures. The Toltec Empire reached as far south as the Valley of Mexico and its influence has been found in artifacts as far away as the current U.S. Southwest. It is believed that aguamiel was first extracted around 1100CE, which led to the making of pulque. The last Toltec ruler was Topilzin Ce-Acatl Quetzalcoatl who came to power in 1085.

After the Spanish conquest of the Aztec Empire, Pedro Miahuazochil was named in 1531 as the lord of Tula helping to evangelize the area.

Tula became a municipality in 1871.

The Tula area was the scene of various battles during the Mexican Revolution, particularly between those loyal to Venustiano Carranza and those to Emiliano Zapata.

The city of Tula de Allende was built on what was the southern extension of the ancient city of Tula, centered on a former monastery built by the Spanish in the 16th century. The modern city is still connected to the ancient ruins as it is an important tourist attraction as well as a symbol of the city, especially the warrior figures located on the Quetzalcoatl pyramid. Toltec finds are not uncommon underneath the modern city. In 2009, Toltec burials from 900-1100CE were found under Tula-Iturbe Boulevard along with several kilns for firing pottery.

The modern city is a regional economic center and has been listed as one of the fastest growing in Mexico by the National Commission of Population. Most of the reason for this is the existence of a refinery and a thermoelectric plant.

The city is centered around the parish and former monastery of San Jose, with the oldest part built between 1546 and 1556. The main facade has three arches, pilasters with reliefs, a curved pediment and a chapel annex that takes from the 17th century. The cloister of the monastery has two levels with arches and fresco murals. Inside the main church, there is a modern mural called “Jesus” located at the main altar. It was named a cathedral in 1961.

Near here is a main plaza and an open-air theatre, framed by a mural called “Tula Eterna” created by Juan Pablo Patiño Cornejo. Another mural called “Tianguis Mamehni” is found at the chamber of commerce. There is also the Plaza de las Artesanias dedicated to local handcrafts including replicas of the atlas figures.

The ceremonial center of ancient Tula is located about five minutes from the center of the modern city. Tula became the most important city in the region after the fall of Teotihuacan, although it never reached the same size due to competing cities in the area. Usually identified as the Toltec capital around 980 CE, the city was destroyed at some time between 1168 and 1179.

The site is at and around the junction of two rivers, the Río Rosas and the Río Tula. The two largest clusters of grand ceremonial architecture are nicknamed “Tula Grande” (the most visited by tourists) and “Tula Chico”. Remains of other buildings extend for some distance in all directions. Tula Grande contains pyramids, Mesoamerican ball courts and other buildings but its most distinctive characteristics are the Atlantean figures, columns in the shape of warriors and the “Serpent Wall,” a wall with reliefs that serve as a predecessor to similar constructions in later cultures.

Traditional dishes of the area include barbacoa, carnitas, pulque, nopal cactus with eggs, beans with epazote and mixote but the area is known for dishes made with escamoles (ant eggs) as well as mezcal worms which are both seasonal.

Street food such as gorditas is popular in the local markets.

Eighty seven percent of the population is Catholic, with most of the rest practicing some form of Catholicism. The main feast day is dedicated to Saint Joseph on March 19. There is also a large annual pilgrimage from here to the Basilica of Guadalupe in Mexico City with many traveling by foot.

Traditional garb for men consisted of pants and shirt made of undyed cotton cloth along with a sombrero. Women’s traditional dress is a dress made of the some cloth often with a crinoline skirt underneath, decorated with ribbons and embroidery although beads and sequins are also used. A wool rebozo is common in the winter. For charreada events, men can be seen in charro outfits and women in China Poblana dress.