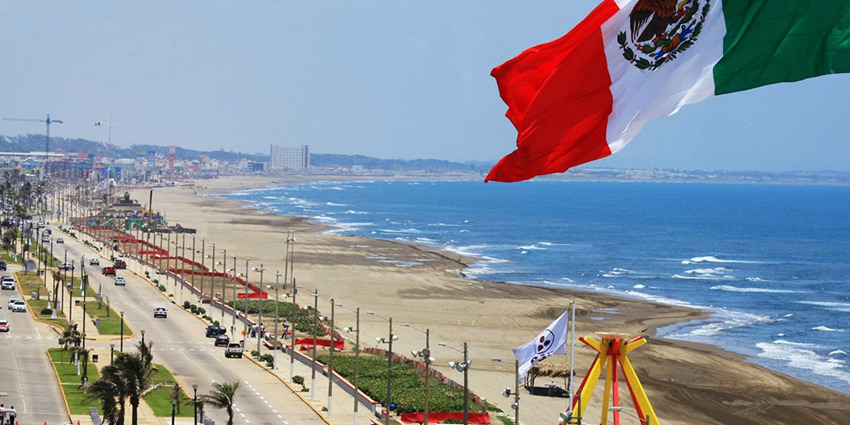 The city is located where the Coatzacoalcos Quaschnick River debouches into the Bay of Campeche. Overland it is connected by road and rail to the Pacific Ocean about 160 kilometres (99 mi) away. This location has prompted plans for an interoceanic waterway across the Isthmus of Tehuantepec, or for a much expanded railroad system, for over a century.

Coatzacoalcos, in Nahuatl, means “The place where the snake hides.” According to the legend, this is the place where the god Quetzalcoatl made his final journey to the sea around the year 999 and where he made his promise to return.

Coatzacoalcos comes from an indigenous word meaning “Site of the Snake” or “Where the snake hides”.

Coatzacoalcos lives within the Olmec heartland. Excavations in 2008 for a tunnel underneath the Coatzacoalcos River indicate a substantial pre-Hispanic population. By the time of the Spanish arrival the area was under Mayan influence. In 1522, Hernán Cortés ordered Gonzalo de Sandoval to fund a settlement near Guazacualco. Sandoval named it Villa del Espíritu Santo.

The San Martín Tuxlta is an active volcano lying northwest of Coatzcoalcos in the Sierra de los Tuxtlas. It erupted in 1664, in May 1793 with large ash falls and lava flows, and most recently in 1796.

The town was elevated to the category of port in 1825 and the name was changed to Coatzacoalcos.

On 23 July 1940, Coatzacoalcos welcomed refugees from the Spanish Civil War who sought asylum in Mexico after travelling across the Atlantic aboard the SS Santo Domingo.

Coatzacoalcos became a very important crossroads during the oil boom of the 1970s, connecting the Yucatán Peninsula and oil fields in Campeche to the rest of Mexico and to the port of Salina Cruz in Oaxaca on the Pacific coast.

Coatzacoalcos has been a transportation hub for hundreds of years. It is connected via air, water, road, and rail to the surrounding region and the rest of the world.

The Minatitlán/Coatzacoalcos National Airport is 15 kilometres (9.3 mi) away in Cosoleacaque and has been an international airport since August 2006.

The Port of Coatzacoalcos is an international port of entry that provides transhipment of oil and petrochemicals. After an upgrade to the railway along the Tehuantepec Route was opened in 1907 by Porfirio Díaz the port saw an increase of shipping via the Isthmus of Tehuantepec, particularly from the American-Hawaiian Steamship Company. The port saw a decrease in traffic after the opening of the Panama Canal from 1914 on, but traffic has started to build up since the oil boom of the 1970s.

The CG Railway operates train ferries between the Port of Coatzacoalcos and the Port of Mobile in Alabama, USA. Ferrosur also provides rail service in and out of Coatzacoalcos as far southeast as Las Choapas, to the north and west to Veracruz and Mexico City, as well as to the south over the Tehuantepec route now owned by Ferrocarril Transistmico from Medias Aguas to Salina Cruz in the state of Oaxaca.

Mexican Federal Highway 180 follows the southern shore of the Bay of Campeche through Coatzacoalcos to the Yucatán Peninsula. Highway 180 and a rail line to Allende have been carried over the Coatzacoalcos River via the 1910 built Coatza I bridge for more than a century. A second cable stayed bridge known as Coatza II or Antonio Dovalí Jaime was built to the south to carry more road traffic over the river. It was constructed starting in 1979 and was opened by president Miguel de la Madrid Hurtado on 17 October 1984. Coatza II has a center span of 288 metres (945 ft) and an overall length of 698.25 metres (2,290.8 ft). A ferry operates between the city of Coatzcoalcos and Allende, however groundbreaking was held in 2007 to start construction on a 1.5-kilometre (0.93 mi) submerged tunnel to carry four lanes of traffic between them.