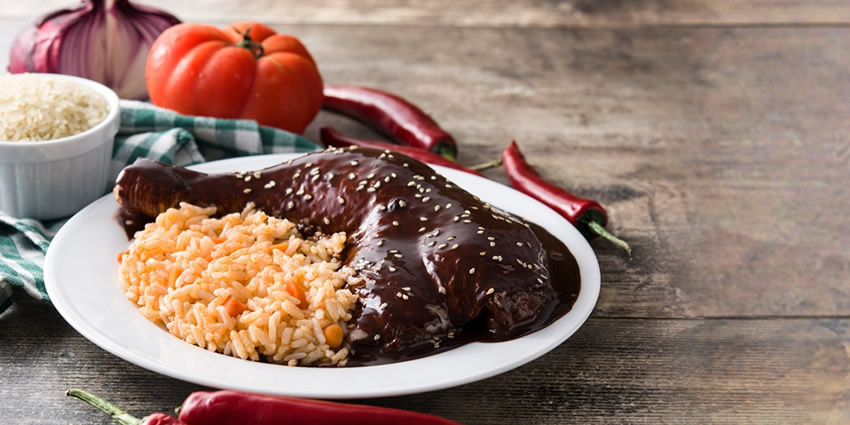 For more than 300 years, Mexican housewives have been preparing the world-famous Mole Poblano sauce. Many people pass down thick brown sauce recipes from generation to generation, make their own “mole”, or simply buy ready-made ones.

The taste of the “mole” varies from spicy to fruity-sweet, and its color – from chocolate to almost black, depending on the region and used ingredients.

After tasting Mole Poblano, and remaining in awe of its magical, chocolatey, subtle aroma and taste unlike anything else, you most probably will not be able to determine what it is made of.

The story of Mole Poblano

Among the myths and legends that surround the Mole Poblano (“Mole from Puebla”), a story stands out that the “mole” was created in the Convent of Santa Rosa in 1681, by Sor Andrea de la Asunción.

Another popular myth tells that the “mole” was created by accident when dinner was being prepared for Bishop Juan de Palafox. Then, Fray Pascual was going to store some chiles and ingredients in the cupboard but tripped and accidentally dropped all mentioned spices into the pot where at that moment the turkey was being cooked.

Evidently, all these stories should be taken as something anecdotal and folkloric, but without any historical rigor. The true history of Mole Poblano begins in pre-Hispanic times, but it was in the Viceroyalty when this dish reached its greatest gastronomic complexity.

Mole Poblano has almost become a symbol of Mexican cuisine. In the beginning, the famous dish was a multi-ingredient sauce poured over a turkey. And although it is more commonly used today with chicken or meat, it is still one of the most characteristic and emblematic dishes of Puebla.

Puebla is the quintessential bastion of this artistic, architectural, cultural, and gastronomic movement in Mexico. Puebla was the cradle of colonial gastronomy.

In addition, according to some historians, Puebla functioned as a collection center for all the ingredients and products obtained in the Spanish colonies to be distributed and sent to the rest of the country.

Puebla was the epicenter of flavors, aromas, and products from almost all over the world that today converge in that single dish.

Mole Poblano facts through the history

The first mentions of the mole that we know of are found in the “General History of Things in New Spain” by Fray Bernardino de Sahagún.

The “mole” has ancient roots since the term mole is derived from the Nahuatl word “mulli” which by coincidence means “to grind” (“moler”) in Spanish since the ingredients of the “mulli” were ground in some kind of a carved stone mortar.

The “moles” had a ritual character, as in the case of the Aztecs who offered them as thanks to Xiuhtecuhtli (God of fire) for both transcendental events, such as births and marriages, as well as everyday ones, such as having carried out a task well.

It is in colonial times that the Mole Poblano is closest to the recipe we know today. It is also at that time that the different myths surrounding his birth began to emerge and spread in the late twenties of the last century.

We must remember that the state of Puebla in the Viceregal era extended from the Pacific Ocean to the Gulf of Mexico, until, in 1849, the state of Guerrero was created. Thanks to this, some elements brought by the Manila Galleon, better known as the Nao de China, were also incorporated into the Mole Poblano.

The Mole Poblano incorporates oriental condiments such as cloves, cinnamon, cumin, black pepper, anise, coriander seed, and scented herbs of European origin such as thyme and marjoram. This is what differentiates it from other “mole” throughout the country, which remain almost identical to their pre-Hispanic versions.

Also during that historical stage, pork and its lard, hen, chicken, goat, dried meat, and sheep began to be added to the “mole” and gradually took the place of the turkey, the iguana, the duck, the armadillo, or opossum.

From 1550, clay pots or pots from Talavera began to be used, displaying the indigenous, Arab, Flemish, and Chinese influences of the 18th century.

The first antecedent of the Mole Poblano is found only in the Novohispano Recipe book, from 1791. This manuscript, found in the General Archive of the Nation, mentions the Mole Poblano, whose ingredients are:

Neither this manuscript nor any other known book mentions the specific place where the Mole Poblano was created. Mole Poblano is the legacy of a long culinary journey that began in pre-Hispanic times, reached its peak in the viceroyalty, but continues to evolve to this day.

After Independence, a process of pride and dissemination of Mexican cuisine begins in books such as El Cocinero Mexicano, from 1831, in which different “mole” appear, among them, the Mole Poblano.

In post-revolutionary times, the sum of inspirations from almost three centuries already outlines a prototype of the Mole Poblano:

“It has four varieties of chiles: anchos, pasillas, Mulato and chipotle; sesame seeds, almonds, walnuts, and peanuts; chocolate; oriental spices (cloves, pepper, and cinnamon); toasted wheat bread and corn tortilla; anise, raisins, coriander, onion, and garlic; tomato and tomato. Of course, it is prepared with lard, sugar, and salt. All this adds up to 25 ingredients.”

Mole Poblano in our days

To give Mexican cuisine its rightful place as one of the best in the world, and the first recognized by UNESCO as such, it is essential to recognize its origins, evolution, and the strength of both its roots, in cases where the original recipes are maintained from pre-Hispanic times in many corners of Mexico, as well as its cultural continuity, which knew how to adapt foreign legacies to enrich, even more, the ancestral flavors of the pre-Hispanic “mulli”.

There was no chocolate in the first “mole”, so it cannot be attributed to chocolate sauces, its structure is much more complicated and requires careful preparation. Since then, the “mole” has been the quintessential festive dish throughout the country, although very different from how it is currently known.

First “mole” did not have ingredients such as lard, onion, or nuts. Nor was it accompanied by pork or chicken because they did not exist in the pre-Hispanic gastronomic landscape. It was then, the combination of ashes, chili peppers, and herbs that was more like a paste.

This dish has evolved over the years, thus adapting to the new ingredients that are used in cooking and in the region where it is produced.

Today, there are more than 50 varieties of “mole” throughout the country in addition to the Mole Poblano, what identifies them is the grinding of chili peppers and spices as the basis for their preparation.

All chiles must be toasted and the seeds removed and then soaked in salted water overnight, one day before preparing the mole.

The correct proportions do not really exist, and some ingredients may be omitted or vary in proportion.

The dish usually is accompanied by chicken and served with tortillas.

Mole Poblano used to be served with turkey, however, nowadays chicken is often used, making the recipe even more popular. The dish is served sprinkled with sesame seeds and topped with rice.

You can save your time if you know how to make rice in the microwave.

You can create quick dishes such as “enchiladas” (tortillas) stuffed with shredded chicken and covered with a savory Mole Poblano. These “enchiladas” are so easy to make with ready-to-serve “mole” and rotisserie chicken. This dish does not disappoint any palate, it satisfies salty, spicy, and sweet tastes.

This symbolic delicacy has its own party: the Mole Poblano festival, which has been held every June since 1991 with the cooperation of the National Chamber of Restaurant and Food Industry.

This cultural event is much loved and is celebrated in Puebla City as well as in the neighborhoods and in the municipalities of the whole state of Puebla.

The main venue is the Santa Rosa Cultural Center in Puebla City, a beautiful place where it is said that this culinary miracle was created in its kitchen, covered in Talavera tiles.