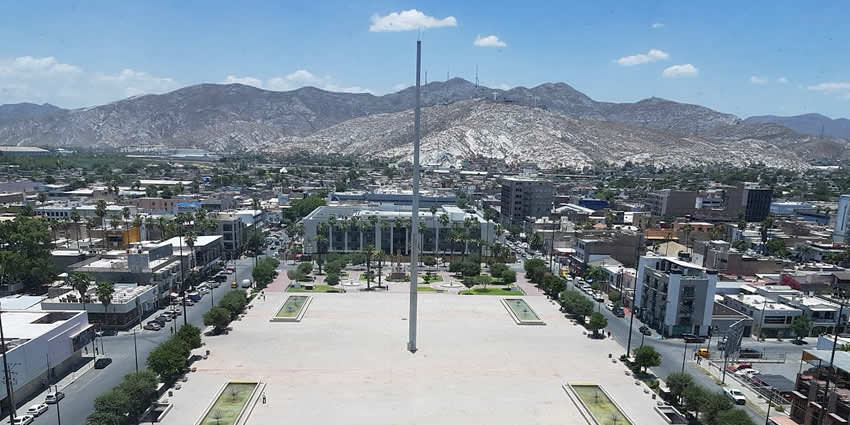 Gómez Palacio is a city and its surrounding municipality in northeastern Durango, Mexico, adjacent to the border of the state of Coahuila. The city is named in honor of former Durango governor, Francisco Gómez Palacio y Bravo.

From the first half of the seventeenth century, the land within the triangle formed by San Juan de Casta (now Leon Guzman), Santiago de Mapimí (Mapimí) and Santa Maria de las Parras (Parras), formed part of the property of the Marquis of Aguayo and named Hacienda de San Lorenzo de la Laguna.

In 1848, after several modifications, the lands were purchased by Juan Ignacio Jimenez, from Cuencame. The purchase included the entrance of the river Nazas (Cañon de Calbazas), where he built Calbazas Dam and a system of canals and ditches to irrigate the lands of the Haciendas of Sacramento, Noé, Santa Rosa, Torreón and San Ignacio.

In 1880, his successors sold these properties to one of his managers, Spanish farmer Santiago Lavín Cuadra. In 1885, Lavín drafted the blocks that would be the beginning of the city. He created a public square in Hidalgo Street (now Independencia) and offered free land to those who agreed to plant trees to give the region a different look. The first deed was recorded September 15, 1885, now considered the city’s founding date. Lavín named the town in honor of Francisco Gomez Palacio for his many achievements as governor, federal deputy, Secretary of the Interior and as an official in the government of Benito Juárez.

The city was officially recognized by the State Congress December 21, 1905, by decree number 60.

On June 25, 1887, a legal society was formed that gave rise to La Jabonera (The Soap), considered the city’s most important industry. Another company was the spinning and weaving La Amistad (Friendship) that received a land grant to set up their factory. Another was La Union (The Union), a shoe factory that became successful enough to compete with imported European and U.S. premium brands.

Upon founding the city, Cuadra ceded land to the Mexican Central Railroad so that it could build a roundhouse and workshops, with the aim of expanding it to an entire railroad terminal. In 1907, a U.S. company transferred its Jimulco facilities to Gómez Palacio and terminals for passenger and cargo trains were established. Over time, about 2,000 workers arrived. The trains were operated by U.S. personnel, who gradually trained Mexican workers to operate the trains. Mexican workers occupied vacancies left by departing Americans and by 1910, all positions were filled by Mexicans.

The city became one of the largest railroad centers in the country, boosting the already thriving development. The outbreak of the revolutionary struggle caused the closure of many industries and businesses, especially affecting manual laborers. For many years, the railroad was the mainstay of the local economy. The roundhouse, workshops and terminals were changed to Torreon, Coahuila.

The installation of the Francke power plant in 1930 gave considerable impetus to industrialization.

The first agricultural strike in the region occurred June 11, 1935, in the Hacienda of Manila, multiplying effects in other estates that resulted in the issuance of the decree of October 6, 1936, by which General Lázaro Cárdenas initiated the distribution of land to laborers throughout the Comarca Lagunera.

As the busiest economy in the region and state, the city contributed nearly 45% of GDP along with Ciudad Lerdo and over 55% with Laguna Region of Durango. Gómez Palacio hosts several industrial parks, including the newer Park Gómez Palacio Americas, Harrier Industrial Park with 588 companies and the Zone of International Connectivity, Laguna for international trade.