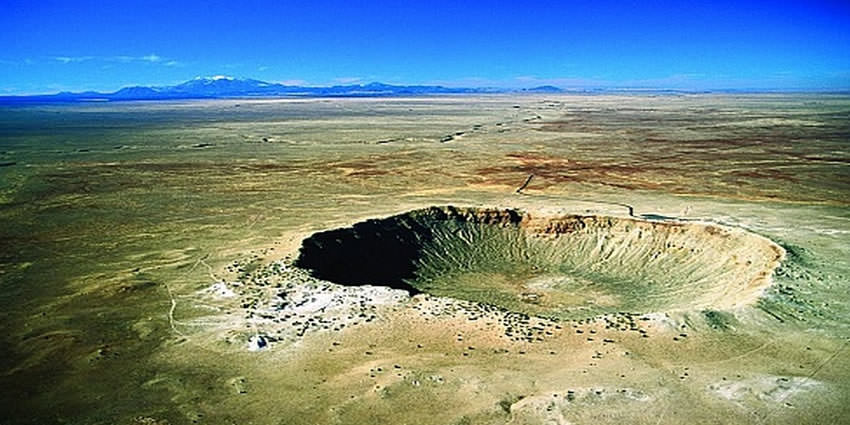 The Chicxulub crater is an impact crater buried underneath the Yucatán Peninsula in Mexico. Its center is located near the town of Chicxulub, after which the crater is named. It was formed by a large asteroid or comet about 11 to 81 kilometers in diameter, the Chicxulub impactor, striking the Earth.

The date of the impact coincides precisely with the Cretaceous–Paleogene boundary, slightly less than 66 million years ago, and a widely accepted theory is that worldwide climate disruption from the event was the cause of the Cretaceous–Paleogene extinction event, a mass extinction in which 75% of plant and animal species on Earth became extinct, including all non-avian dinosaurs.

The crater is estimated to be 150 kilometers in diameter and 20 km in-depth, well into the continental crust of the region of about 10–30 km depth. It is the second-largest confirmed impact structure on Earth and the only one whose peak ring is intact and directly accessible for scientific research.

The crater was discovered by Antonio Camargo and Glen Penfield, geophysicists who had been looking for petroleum in Yucatán during the late 1970s. Penfield was initially unable to obtain evidence that the geological feature was a crater and gave up his search.

Later, through contact with Alan Hildebrand in 1990, Penfield obtained samples that suggested it was an impact feature. Evidence for the impact origin of the crater includes shocked quartz, a gravity anomaly, and tektites in surrounding areas.

In 2016, a scientific drilling project drilled deep into the peak ring of the impact crater, hundreds of meters below the current seafloor, to obtain rock core samples from the impact itself. The discoveries were widely seen as confirming current theories related to both the crater impact and its effects.

In 1978, geophysicists Glen Penfield and Antonio Camargo were working for the Mexican state-owned oil company Petróleos Mexicanos, or Pemex, as part of an airborne magnetic survey of the Gulf of Mexico north of the Yucatán peninsula.

Penfield’s job was to use geophysical data to scout possible locations for oil drilling. In the data, Penfield found a huge underwater arc with “extraordinary symmetry” in a ring 70 km across. He then obtained a gravity map of the Yucatán made in the 1960s.

A decade earlier, the same map suggested an impact feature to contractor Robert Baltosser, but he was forbidden to publicize his conclusion by Pemex corporate policy of the time. Penfield found another arc on the peninsula itself, the ends of which pointed northward.

Comparing the two maps, he found the separate arcs formed a circle, 180 km wide, centered near the Yucatán village Chicxulub; he felt certain the shape had been created by a cataclysmic event in geologic history.

Pemex disallowed the release of specific data but let Penfield and company official Antonio Camargo present their results at the 1981 Society of Exploration Geophysicists conference. That year’s conference was underattended and their report attracted scant attention.

Coincidentally, many experts in impact craters and the Cretaceous–Paleogene boundary were attending a separate conference on Earth impacts. Although Penfield had plenty of geophysical data sets, he had no rock cores or other physical evidence of an impact.

He knew Pemex had drilled exploratory wells in the region. In 1951, one bored into what was described as a thick layer of andesite about 1.3 kilometers down. This layer could have resulted from the intense heat and pressure of an Earth’s impact, but at the time of the borings, it was dismissed as a lava dome—a feature uncharacteristic of the region’s geology.

Penfield tried to secure site samples but was told such samples had been lost or destroyed. When attempts at returning to the drill sites and looking for rocks proved fruitless, Penfield abandoned his search, published his findings, and returned to his Pemex work.

Their evidence included greenish-brown clay with surplus iridium containing shocked quartz grains and small weathered glass beads that looked to be tektites. Thick, jumbled deposits of coarse rock fragments were also present, thought to have been scoured from one place and deposited elsewhere by a megatsunami resulting from an Earth impact.

Such deposits occur in many locations but seem concentrated in the Caribbean basin at the K–Pg boundary. So when Haitian professor Florentine Morás discovered what he thought to be evidence of an ancient volcano in Haiti, Hildebrand suggested it could be a telltale feature of a nearby impact. Tests on samples retrieved from the K–Pg boundary revealed more tektite glass, formed only in the heat of asteroid impacts and high-yield nuclear detonations.

A team of California researchers including Kevin Pope, Adriana Ocampo, and Charles Duller, surveying regional satellite images in 1996, found a cenote (sinkhole) ring centered on Chicxulub that matched the one Penfield saw earlier; the cenotes were thought to be caused by the subsidence of bolide-weakened lithostratigraphy around the impact crater wall. More recent evidence suggests the actual crater is 300 km wide, and the 180 km ring is, in fact, an inner wall of it.

The Chicxulub impactor had an estimated diameter of 11–81 kilometers and delivered estimated energy of 21–921 billion Hiroshima A-bombs. The impact created a hole 100 kilometers wide and 30 kilometers deep, leaving a crater mainly under the sea and covered by 600 meters of sediment by the 21st century.

The impact would have caused a megatsunami over 100 meters tall that would have reached all the way to what is now Texas and Florida.

The height of the tsunami was limited by the relatively shallow sea in the area of the impact; in the deep ocean, it would have been 4.6 kilometers tall.

A cloud of super-heated dust, ash, and steam would have spread from the crater as the impactor burrowed underground in less than a second.

Excavated material along with pieces of the impactor, ejected out of the atmosphere by the blast, would have been heated to incandescence upon re-entry, broiling the Earth’s surface and possibly igniting wildfires; meanwhile, colossal shock waves would have triggered global earthquakes and volcanic eruptions.

Fossil evidence for an instantaneous die-off of diverse animals was found in a soil layer only 10 centimeters thick in New Jersey some 5,000 kilometers away from the impact site, indicating that death and burial under debris occurred suddenly and quickly over wide distances on land.

Field research from the Hell Creek Formation in North Dakota published in 2019 shows the simultaneous mass extinction of myriad species combined with geological and atmospheric features consistent with the impact event.

The emission of dust and particles could have covered the entire surface of the Earth for several years, possibly a decade, creating a harsh environment for living things. The shock production of carbon dioxide caused by the destruction of carbonate rocks would have led to a sudden greenhouse effect.

Over a decade or longer, sunlight would have been blocked from reaching the surface of the Earth by the dust particles in the atmosphere, cooling the surface dramatically. Photosynthesis by plants would also have been interrupted, affecting the entire food chain.

A long-term local effect of the impact was the creation of the Yucatán sedimentary basin which “ultimately produced favorable conditions for human settlement in a region where surface water is scarce.”

In recent years, several other craters of around the same age as Chicxulub have been discovered, all between latitudes 20°N and 70°N.

Examples include the disputed Silverpit crater in the North Sea and the Boltysh crater in Ukraine. Both are much smaller than Chicxulub but are likely to have been caused by objects many tens of meters across striking the Earth. This has led to the hypothesis that the Chicxulub impact may have been only one of several impacts that happened nearly at the same time.

Another possible crater thought to have been formed at the same time is the larger Shiva crater, though the structure’s status as an impact crater is contested.

Where is the Chicxulub crater located?