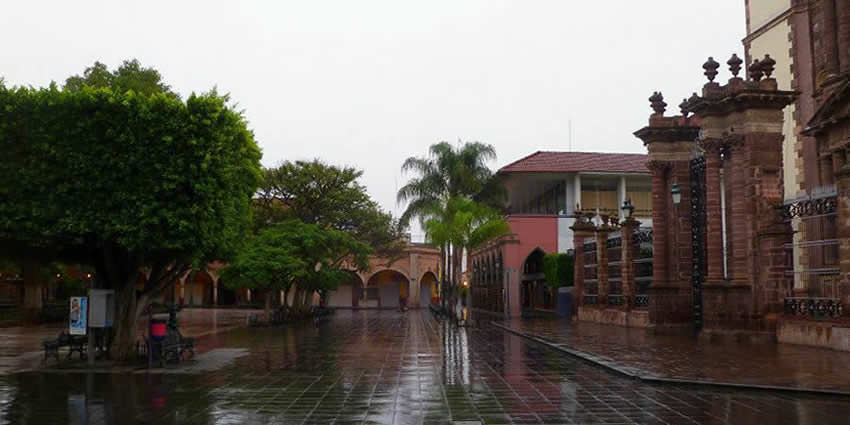 Zamora de Hidalgo, is a city in the Mexican state of Michoacán.

The city is the municipal seat of Zamora Municipality, which has an area of 330.97 km² and includes many other smaller communities, the largest of which is Ario de Rayón (Ario Santa Mónica).

The municipality’s population is around 186,102, which makes it the second most populous urban area in the state.

The city of Zamora is an important economic center in the state and the most significant population center between the cities of Morelia and Guadalajara.

The city is located on the Tarascan Plateau in the northwestern part of the state, at an elevation of 1,567 m above sea level.

Zamora is surrounded by the fertile Tziróndaro Valley which is an important agricultural area that exports large amounts of produce to the United States.

Zamora de Hidalgo is located in the northwestern part of the state of Michoacán on the Tarascan Plateau at an elevation of 1,567 m above sea level.

The city is the municipal seat of Zamora Municipality, which has an area of 330.97 km² and includes many other smaller communities, the largest of which is Ario de Rayón (Ario Santa Mónica).

More specifically the city is found in Tziróndaro Valley (Purépecha for “Swamp place”), a large alluvial plain surrounded by mountains with a northeast-southeast orientation.

The topography of the region is flat with no slopes greater than 5%. During the Cenozoic, the area was a flood plain of the Duero River which deposited large amounts of basalt, breccia, calcareous tuff, tuff, andesite, and rhyolite.

The dominant basalt rock found in the area gives the soil a rich source of calcium, magnesium, iron, potassium, and sodium. The soils in the surrounding areas are rich and fertile making the region perfect for agriculture.

The soil in the area is classified as pellic vertisol with significant amounts of chromate; the soil is of fine texture with a rocky layer containing rocks smaller than 7.5 cm³.

The city has a humid subtropical climate with an average annual temperature of 18.5 °C.

The city has an average annual precipitation of about 900.6 mm mostly falling during the summer.

The city was named after the Spanish city of Zamora because the first European settlers to the area were predominantly from the Spanish province of Castilla y León.

Zamora is of Iberian origins that can be traced to the Latin “Civitas Murata” meaning “The Walled City” because it is surrounded by high hills.

In 1953, the city officially added “de Hidalgo” to honor Miguel Hidalgo y Costilla which declared the village a city during the movement for independence in Mexico.

Evidence shows the area was first settled around 1500 BC.

During the Pre-Columbian Period, there were several waves of migrations into the area by surrounding tribes: Pirinda, Nahua, Huetamo, Colima, and Purépecha. Zamora sits in the Tziróndaro Valley which means “swamp place” in the Purépecha language.

The village of Zamora was founded on January 18, 1574, on the orders of Viceroy Martín Enríquez de Almanza, by Spanish settlers from the Spanish city of Zamora.

The Spanish were attracted to the area because of the fertile valleys in the region that was well suited for agricultural development.

Zamora was awarded city status by the Constitutional Congress in 1825, ratifying a decision made on November 21, 1810, by the Mexican War of Independence revolutionary leader Miguel Hidalgo y Costilla.

During the 19th century, Zamora developed into a great cultural and economic center due to high agricultural productivity and flourishing commerce. On December 10, 1831, Zamora was declared the municipal seat.

Later the city’s elite began a political movement to create a new state in which Zamora would be the state capital.

In 1846, Archbishop Pelagio Antonio de Labastida y Dávalos initiated a clerical separation from Mexico City. By 1862 a new ecclesiastical office was founded, Dioceses of Zamora based in Zamora.

The political aspirations to separate from the rest of the state were impeded.

Zamora was one of the first cities in the state that implemented new technologies like railroad stations, telegraphs, telephones, electricity, and modern water systems.

In 1899 the department of transportation connected Zamora by railroad to other important population centers in central Mexico. At the same time, the department of urbanization had an image they wanted for the city which involved many modernization projects throughout the city.

Large civil offices and religious temples were erected during this time that flaunted the economic wealth of the city like the Michoacán Center for the Arts, the College of Michoacán, and Obrero de Zamora Theatre.

On February 2, 1898, at the feast of Candlemas led by the second bishop of Zamora, Don Jose Ma. Càzares y Martinez the cornerstone of the Cathedral of Our Lady of Guadalupe was laid.

During this time many of the city’s elite built new homes largely inspired by Victorian and Châteauesque architectural styles.

The Mexican Revolution reached the state in 1911 when those loyal to Francisco I. Madero proclaimed the city and surrounding area their territory. When the state governor resigned the city would continue to be involved in the war.

In 1918 the state ratified the state constitution. After the Mexican Revolution, the Cristero War continued to devastate the region’s agriculture which had detrimental economic effects on the city.

Political hostilities would finally end in the city and vicinity in 1926.

A number of historic buildings dot the city center, built during Spanish colonial times and the 19th century.

One of the main tourist attractions is the Cathedral of Our Lady of Guadalupe, located on 5 de Mayo Avenue.

It is a neo-gothic style architectural cathedral which its construction began on February 2, 1898, this cathedral reaches 107.5 meters in height, 95 meters long, 57 meters wide, and a total surface area of 5,415 square meters making it one of the largest cathedrals of its kind in the American continent.

Zamora has several leisure alternatives, periodically Theater of the City of Zamora offers events, like piano recitals, theater, camera concerts, and works, also the School of Michoacán A.C. with soothes in Zamora offers to the citizenship diverse cultural events like cycles of films festivals, recitals, concerts and presentations of folkloric dances and events.

Every year in December the Festival of the Chongos Zamoranos is held, where the visitor is able to taste gastronomical samples, musical dances, and interpretations, as well as the “Poets Meeting” every 12 December in the Cathedral of Our Lady of Guadalupe and in diverse places of the city.

One of the nearby best attractions is the Lago de Camécuaro National Park, which is one out of 5 national parks.