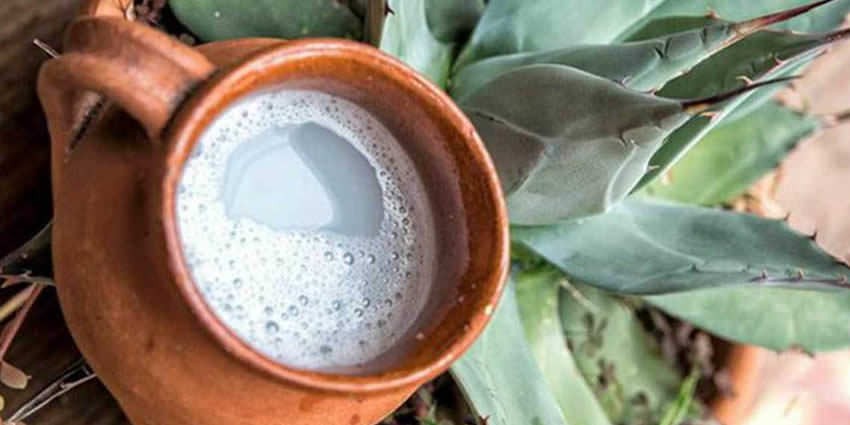 Pulque, occasionally referred to as agave wine, is an alcoholic beverage made from the fermented sap of the maguey (agave) plant.

It is traditional to central Mexico, where it has been produced for millennia. It has the color of milk, a somewhat viscous consistency, and a sour yeast-like taste.

The manufacturing process of pulque is complex and required the death of the maguey plant. As the plant nears maturity, the center begins to swell and elongate as the plant gathers stored sugar to send up a single flower stalk, which may reach up to 20 feet in height.

However, plants destined for pulque production have this flower stalk cut off, leaving a depressed surface 12-18 inches in diameter. In this center, the maguey sap, known as aguamiel (“honey water”), collects.

It takes a maguey plant 12 years to mature enough to produce the sap for pulque.

The drink’s history extends far back into the Mesoamerican period when it was considered sacred, and its use was limited to certain classes of people. After the Spanish Conquest of Mexico, the drink became secular and its consumption rose.

The consumption of pulque reached its peak in the late 19th century.

In the 20th century, the drink fell into decline, mostly because of competition from beer, which became more prevalent with the arrival of European immigrants. There are some efforts to revive the drink’s popularity through tourism.

Pulque is a milk-colored, somewhat viscous liquid that produces a light foam. It is made by fermenting the sap of certain types of maguey (agave) plants.

In contrast, mezcal is made from the cooked heart of certain agave plants, and tequila, a variety of mezcal, is made all or mostly from blue agave. About six varieties of maguey are best used for the production of pulque.

The name pulque is derived from Nahuatl. The original name of the drink was iztāc octli (“white pulque”), the term pulque was probably mistakenly derived by the Spanish from the octli poliuhqui, which meant “spoiled pulque”.

When the pulque is in good condition, is energetic, diuretic, and good for diabetes, anemia, and gastrointestinal diseases. Improved breastfeeding, serves as a caustic to clean the wounds, blood, and heated further refreshes.

Pulque has been drunk for at least 1,000 years, and its origins are the subject of various stories and myths.

Most involve Mayahuel, the goddess of the maguey. It was thought that the aguamiel collecting in the center of the plant was her blood. Other deities, such as the Centzon Totochtin (400 rabbits) are associated with it, by representing the drink’s effects, and are the children of Mayahuel.

According to another story, pulque was discovered by the Tlacuache (opossum), who used his human-like hands to dig into the maguey and extract the naturally fermenting juice. He became the first drunk. Tlacuache was thought to set the course of rivers.

The rivers he set were generally straight except when he was drunk. Then they follow Tlacuache’s meandering path from cantina to cantina.

Another account traces the discovery of aguamiel to the Toltec Empire when a noble named Papantzin was trying to get the emperor to marry his daughter Xochitl.

He sent her to the capital with an offering of aguamiel, honey of the agave plant. The emperor and princess wed, and their son was named Meconetzin (maguey son). In other versions of the story, Xochitl is credited with discovering pulque.

The maguey was one of the most sacred and important plants in ancient Mexico.

It had a privileged place in mythology, religious rituals, and the Mesoamerican economy. Pulque appears in a number of graphic representations from pre-colonial times, beginning with stone carvings from about 200 CE.

The first major work involving pulque is a large mural called the “Pulque Drinkers”, unearthed in 1968 at the pyramid of Cholula, Puebla.

The most likely means of the discovery of aguamiel and fermented pulque was from the observation of rodents who gnaw and scratch at the plant to drink the seeping sap. Fermentation of the aguamiel can take place within the plant itself.

For the indigenous peoples of the central highlands of Mexico, the imbibing of pulque was done only by certain people, under certain conditions.

It was a ritual drink, consumed during certain festivals, such as that of the goddess Mayahuel, and the god Mixcoatl. It was drunk by priests and sacrificial victims, to increase the priests’ enthusiasm and to ease the suffering of the victim.

There are many references in Aztec codices, such as the Borbonicus Codex, to the pulque’s use by nobility and priesthood to celebrate victories. Among commoners, it was permitted only to the elderly and pregnant women.

Production of pulque was ritualized and the brewers were superstitious. They would abstain from sex during the fermentation period because they believed that sexual intercourse would sour the process.

After the Conquest, the pulque lost its sacred character, and both indigenous and Spanish people began to drink it.

The Spanish initially made no laws regarding its use. It became a lucrative source of tax revenue, but by 1672, public drunkenness had become enough of a problem that the viceregal government created regulations to curtail its consumption.

A maximum of 36 “pulquerias” were permitted for Mexico City, which had to be located in open areas, be without doors, and close at sundown. Food, music, dancing, and the co-mingling of the sexes were prohibited.

At the end of the 17th century, the Jesuits began large-scale production of the drink to finance its educational institutions. In this way, the making of pulque passed from being a homemade brew to one commercially produced.

Since the year 1784 for preventing the consequences of alcoholism, prohibited people to stay a long time in the pulque, which was the places destined for the consumption of pulque, so they had ads saying “they enter, go drinking, go pay, go out.”

However, pulque continued to play a major role in the socioeconomic history of Mexico during colonial times and in the early years of Independence. Through this period, it was the fourth-largest source of tax revenue.

In the late 19th century, farmers who cultivated maguey obtained higher profits thanks to the railroad, which pulque barrels moved more quickly to large cities for consumption.

They won so much money from the sale of pulque which was known as the “Aristocracy pulque”.

From the glory days of pulque, the state of Hidalgo has about 250 pulque haciendas, many of which have been abandoned or converted to other uses, such as ranching. Their tinacals have either disappeared or been converted into storage or party rooms.

A few remaining ones continue to make pulque but use more modern and sanitary facilities.

These are the places where you drink pulque and sold in the early twentieth century there was more than a thousand pulque in Mexico City They are characterized by their picaresque names written on the front and large signs decorated with murals of landscapes campiranos.

Inside the pulque had a division for women to come in for pulque, the floor was covered with sawdust and ceiling-hung colored confetti. Some pulque, also offered snacks such as enchiladas, gorditas, memelas, pork, beans, and a variety of salsas with tortilla griddle.

In Tlaxcala, the federal Secretariat of Tourism and the state government have organized a two-day tour called the “Pulque Route”, which includes the main haciendas that still make the beverage in this state.

These old haciendas varied widely. Some were ostentatious with great architectural harmony such as the Montecillos Hacienda, of Spanish colonial style and originally built in the 17th century.

However, most haciendas were the result of a constructive process that started in the 16th century, with mixed architectural styles and methods from both Mexico and Europe.

The tour also covers maguey fields like those around a town called Guillermo Ramirez.