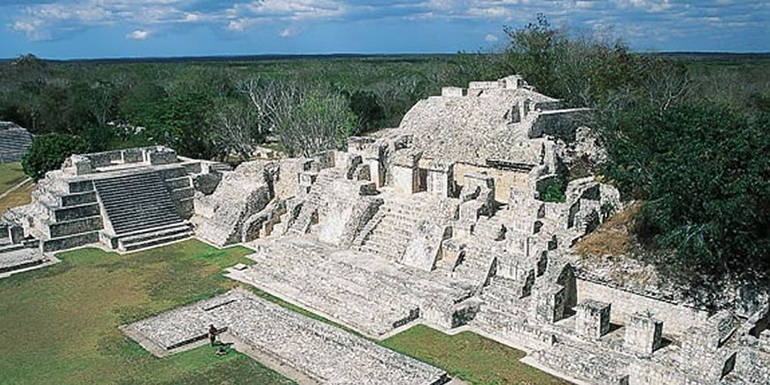 Edzná is a Maya archaeological site in the north of the Mexican state of Campeche. The site is open to visitors.

The most remarkable building at the plaza is the main temple. Built on a platform 40 m high, it provides a wide overview of the surroundings. Another significant building located in the plaza is a ball court. Two parallel structures make up the ball court. The top rooms of the ball court were possibly used to store images of the gods associated with the events, along with items needed for the games.

Edzná was already inhabited in 400 BC, and it was abandoned circa 1500 AD. During the time of occupation, a government was set up whose power was legitimized by the relationship between governors and the deities. In the Late Classic period Edzná was part of the Calakmul polity. Edzná may have been inhabited as early as 600 BC but it took until 200 AD before it developed into a major city. The word Edzná comes from “House of the Itzás” which may suggest that the city was influenced by the family Itzá long before they founded Chichen Itzá. The architectural style of this site shows signs of the Puuc style, even though it is far from the Puuc Hills sites. The decline and eventual abandonment of Edzná still remains a mystery today.

Edzná was discovered in 1907. The first organised excavations started in 1958. In 1986, coordinating agencies began to employ Guatemalan refugees in the excavation, restoration and maintenance at Edzná. This project was funded by various international organizations.