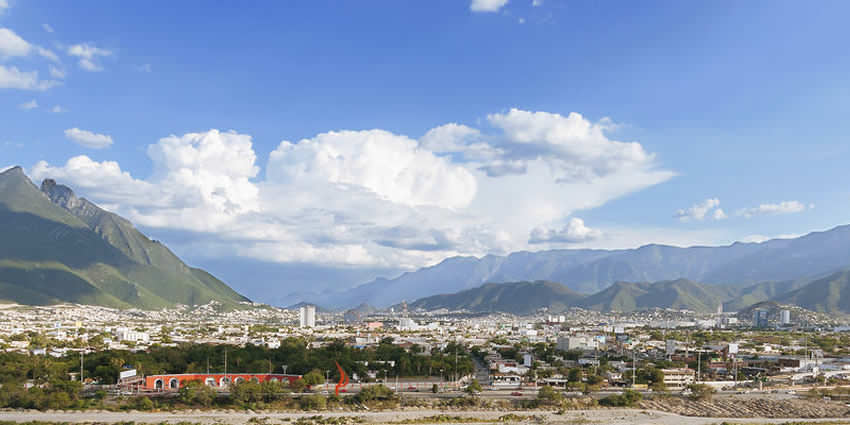 Guadalupe is a city and surrounding municipality located in the state of Nuevo León, in northern Mexico. It is part of the Greater Monterrey Metropolitan area.

The municipality of Guadalupe, which lies adjacent to the east side of Monterrey, also borders the municipalities of San Nicolás de los Garza, Apodaca, Pesquería, and Juárez.

Covering a territory of 151.3 km², it is located at an altitude of 500 meters above sea level.

When Monterrey was founded in 1596, the land, which was populated by various indigenous tribes, was ceded to Diego de Montemayor, the founder of Monterrey, but he did not make use of the land.

In 1627, the land was turned into large plantations, where sugar cane and corn were raised.

The owner of the land around the time of the turn of the 18th century was named Capitán Nicolás Ochoa de Elejalde, but the land was taken from him by the Spanish government and converted into a mission in February 1715.

With the remaining natives, he established on February 5, 1715, the Mission of Our Lady of Guadalupe a league east of Monterrey.

In its beginnings, Guadalupe was an agricultural town. However, this condition was progressively replaced by industry, commerce, and services.

On March 5, 1825, the city was declared a municipality of Nuevo León and categorized as a villa, even though for many years it continued to be called the “Villa de Guadalupe”.

On October 4, 2019, the mayors of Guadalupe and Tlaxcala signed a twinning agreement between both cities, consolidating the cultural and commercial bridge between both municipalities.

Parque La Pastora: Inside the park, there is a zoo that houses different species of animals, as well as an aviary and a herbarium.

Pipo Park: Park dedicated to the Monterrey clown “Pipo”, it has walkways on the sides of the river and various green areas.

BBVA Stadium: Recently inaugurated with a capacity of 53,500 spectators, the matches of the Monterrey Football Club are played here and it is the venue for various concerts.

Expo Guadalupe: The Regional Livestock Exhibition is held annually, in addition to the cattle and sheep exhibition, there are mechanical games, restaurants with Mexican snacks and regional dishes, and El Domo Care, which is where great artists are presented.

Tolteca Park: It has the permanent water of the La Silla River, a place for family recreation, it has: boats, slides and soda fountains, grills, and snack bars.

Ciudad Guadalupe Museum: Dedicated to the approach to the origins of the municipality through its history, geographical characteristics, and original settlers.

The patronal festival is the second Sunday of the month of August, the patron of the town is the Lord of Expiration who is in the Old Temple of the same name.

He is also called the Lord of the rain; for the celebration, there are various activities accompanied by music and dance, all this in the main square of the municipality, the mornings are sung at 22:00, and then continue with the pyrotechnics.

This is the legend:

It happened one morning when the first light of dawn was barely visible.

The Indians woke up startled and ran quickly to the Chapel because they heard the tolling of the bell. They were in shock when they realized that it was not the Indian Sacristán who was ringing it, but a donkey that moved its neck and pulled the rope with its snout.

The beast carried a heavy load on its back. Locals freed the donkey from such a weight, and when they put the box of rough and poorly nailed boards on the ground, they noticed that its content was a life-size image of the crucified Lord.

Kneeling down before such a providential visit; some wept, moved by the expression on the Lord’s face; others crossed themselves with a gesture of astonishment and delight.

They introduced the Christ in the Chapel, substituting him for the great wooden cross that stood out in the background, and that had been venerated until then as the owner of the primitive hacienda.

So overflowing was the joy that no one knew more about the tired donkey that had been left by the door. They searched for them a lot among the bushes and fields; everything was useless, and they did not find it.

However, it is said that he was found dead of exhaustion near the north door of the Chapel and that he was buried right there.

Since then this image has been venerated in what is now the Parish and Sanctuary of Our Lady of Guadalupe.