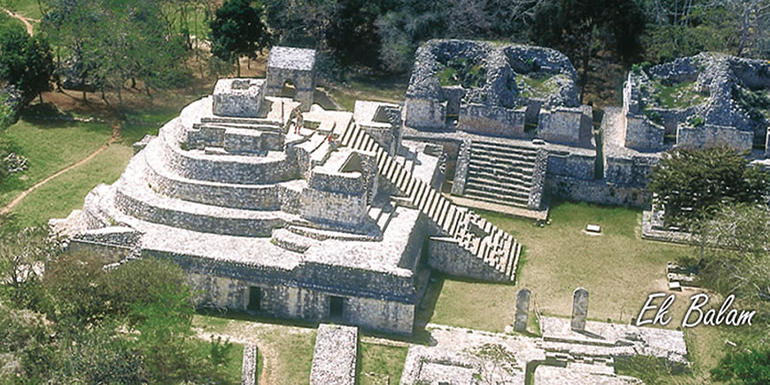 Ek’ Balam is a yucatec maya archaeological site within the municipality of Temozón, Yucatán, Mexico.

It lies in the northern maya lowlands, 25 kilometres (16 mi) north of Valladolid and 56 kilometres (35 mi) northeast of Chichen Itza.

From the Preclassic until the Postclassic period, it was the seat of a mayan kingdom.

The site is noted for the preservation of the plaster on the tomb of Ukit-Kan-Lek-Tok, a king buried in the side of the largest pyramid.

Ek’ Balam was occupied from the Middle Preclassic through the Postclassic, although it ceased to thrive as a major city past the Late Classic.

Beginning in the Late Preclassic, the population grew and the city expanded throughout the following periods. It eventually became the capital of the polity that controlled the region around the beginning of the Common Era.

At its height from 770 to 840 CE, Ek’ Balam provides a rich resource of information for understanding northern classic cities, due to the poor preservation of many other notable northern maya sites (e.g. Coba, Izamal, and Edzna).

It was during this height that the Late Yumcab ceramic complex (750-1050/1100 CE) dominated the architecture and pottery of Ek’ Balam. The population decreased dramatically, down to 10% of its highest, during the Postclassic period as Ek’ Balam was slowly becoming vacant.

There are several theories to why it was eventually abandoned and to the degree of haste at which it was abandoned.

Ek Balam is mentioned in a late-sixteenth century Relación Geográfica, an official inquiry held by the colonial government among local Spanish landowners. It is reported to have belonged to a kingdom called ‘Talol’, founded by a Ek’ Balam, or Coch Cal Balam, who had come from the East. Later, the region was dominated by the aristocratic Cupul family.

There are 45 structures, including:

The layout of the site is surrounded by two concentric walls which served as defense against attack. There were many smaller walls that snaked through the city as well.

The inner wall encompasses an area of 9.55 hectares (23.6 acres). The carved stone of the inner wall, 2 metres (6.6 ft) tall and 3 metres (9.8 ft) wide, is covered in plaster; the outer wall serves purely for defense, as it is less substantial and less decorative.

These walls were the largest in the Late Classic Yucatan, and seem to have a symbolic meaning of protection and military strength. Theories claiming a hasty desertion of the city are backed up by the fourth wall inside the city, which “bisects the Great Plaza, and, at less than a meter wide and made of poorly constructed rubble, it was clearly built as a last ditch effort at protection” against invading attackers.

Structures Inside the Walls

Only the center of Ek’ Balam has been excavated. Large, raised platforms line the interior wall, surrounding internal plazas.

Sacbé roads stem off of the center in the four cardinal directions, an architectural allusion to the idea of a “four-part cosmos”. These roads are often understood to have been sacred.

The buildings were designed in the northern Petén architectural style, as were the surrounding large cities of the time, although it has its dissimilarities with them as well.

In rooms of the Acropolis, wall paintings consisting of texts have been found, amongst these the ‘Mural of the 96 Glyphs’, a masterwork of calligraphy comparable to the ‘Tablet of the 96 Glyphs’ from Palenque.

Another wall painting of the Acropolis features a mythological scene with a hunted deer, which has been interpreted as the origin of death. A series of vault capstones depict the lightning deity, a specific decoration also known from other Yucatec sites.

View from the top

On a clear day, from the top of the Acrópolis, temples of Cobá and Chichén Itzá can be seen on the horizon.

Ek’ Balam was rediscovered and explored first by influential archaeologist Désiré Charnay in the late 1800s but extensive excavation did not take place until a century later.

Bill Ringle and George Bey III mapped the site in the late 1980s, and continued to do extensive research into the 1990s, their works being cited by many others who later write on the site.

Alfonso García-Gallo Lacadena deciphered the most important set of North Maya Maya hieroglyphic texts and all historical references of Ek Balam are based on his intellectual work.