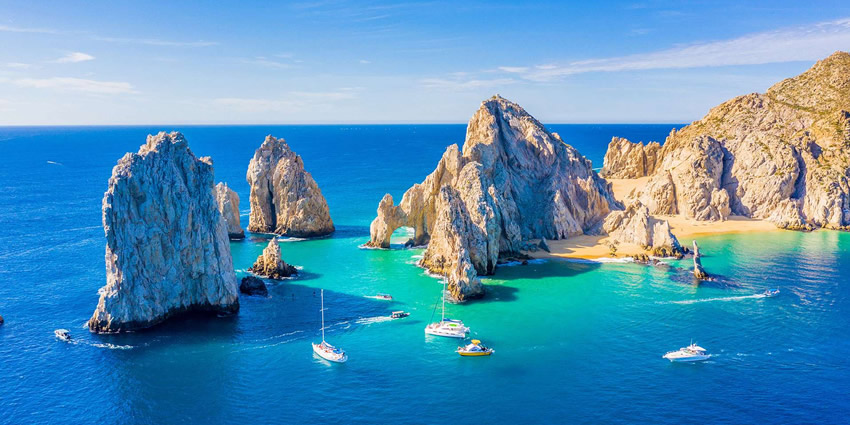 Los Cabos is part of the “Costa Dorada” (“Golden Coast”) of Mexico, bathed by the Pacific Ocean and the Sea of Cortez. Los Cabos is a world-class tourist destination with luxury hotels, condominiums, villas, golf courses, and beautiful beaches.

The sparkling ocean, soft pleasant sands, radiant sunsets, and the tropical breeze make Los Cabos one of the best tourist destinations in Mexico.

The climate of Los Cabos makes this place one of the best vacation destinations. This stunning resort is a year-round traveler’s paradise, as its constant sunny days and ideal temperatures make vacationing in Los Cabos a truly wonderful experience.

The best time to visit Los Cabos mainly depends on the type of activities you are interested in and the type of weather you prefer. Vacationers can expect to find conditions they dream of for a relaxing, adventurous, and exciting vacation.

In this paradise, there is an activity for everyone: fishing, golf, diving, snorkeling, kayaking, horseback riding, and SPAs.

There are also many activities at no cost such as snorkeling in the Cabo Pulmo Marine Park or exploring the art galleries in San José del Cabo.

Los Cabos has an ideal beaches. Whether you are looking for a peaceful day on a beach, swimming and sunbathing or just a romantic walk along the seashore, you will always have many options to choose from.

The southern point of the Baja California peninsula mesmerizes visitors with the movement of its gentle waves. This place is one of the most impressive coastlines in Mexico.

There is an activity for everyone: watching whales or swimming with the whale shark, surfing, diving, snorkeling or parasailing, windsurfing, kayaking, water skiing, sailing, or stand-up paddle.

Los Cabos also is known as the “Marlin Capital of the World” and it is a magnet for sports fishermen.

Los Cabos is a haven for those who want to escape from the cold and snow during the winter months, and also for those who seek a summer getaway.

Although the climate in Los Cabos is more moderate than in other places in Mexico, it is better to check the average temperature and the rain forecast before traveling to Los Cabos.

From December to April

Start your year in Los Cabos Mexico with mild temperatures while the breeze carries away the humidity. For many, this is the time to escape the cold winds and freezing temperatures of the north by taking vacations in Mexico.

Los Cabos’ climate makes this time of year popular for tourists who love warm air but want to avoid the extreme heat of the desert. The winter season here has an average temperature of 21º Celsius, while in early spring the temperature is around 27º Celsius.

During this period of time, you won’t have to fight the rains, but you may have to struggle to find an available spot by the pool, as this is the most popular time of the year for those traveling to Mexico.

If you like whale watching and sport fishing, this is the best time of year to visit Los Cabos.

During the season, tours depart every day to watch the whales that migrate south to give birth in the warm Mexican waters. Visitors will be able to see these incredible creatures swimming and playing from the shores of Cabo Las Lucas.

Sportfishing is also popular during the winter months, when certain species, such as Marlin, Tuna, and Yellowtail, are abundant. March and April are also great for those looking to fish for Sierra, Swordfish, and occasionally Dorado.

From May to July

As many visitors return home, so do the colder temperatures go away, but those looking to travel during the early summer months need not fear Cabo’s weather because as the mild weather begins to rise, so do many of the warmer weather. hotel deals.

The warm climate, with the temperature in Cabo San Lucas hovering around 27º Celsius and with a more relaxed atmosphere, makes this the ideal time of year for family vacations.

Playing in the cool ocean waves, participating in a game of water volleyball, and relaxing under the shade of an umbrella are some of the most refreshing ways to spend your days during the summer months in Los Cabos Mexico.

From August to September

This is the best time of year to visit Cabo San Lucas if you want to avoid the big crowds and are not bothered by some storms during your vacation.

The weather in Los Cabos during the months of August to September is known to be more stormy than normal. However, given its desert climate, there is actually only a 20% chance of rain per day.

The late summer season is also known to include the lowest prices for hotels, making it easier to go on vacation if you are on a tight budget. Popular restaurants, perfect beaches, and one of the best sportfishing destinations in the world are for you to take advantage of.

For bathers, this is also the best time of year to surf as the winds bring some of the most exciting waves of the season.

From October to November

Some say that this is the best time of year to visit Los Cabos if you want to be on the water. Near-perfect temperatures and constant sunny days make vacations fascinating.

For those who like to dive and snorkel, the waters are still warm and have their highest visibility, making it easy to spot bright tropical fish and other exotic marine life.

The abundance of fish in temperate waters also causes athletes to catch tuna, marlin, and sailfish. Some anglers even participate in local fishing tournaments to see who can catch the biggest catch.

It is always vacation time in Los Cabos, but to plan the trip that best suits your dreams, choose the time of year when the weather and activities match what you are looking for.

Whether it’s whale watching in the spring or deep-sea fishing in the fall, the tropical breeze will call you to Los Cabos.