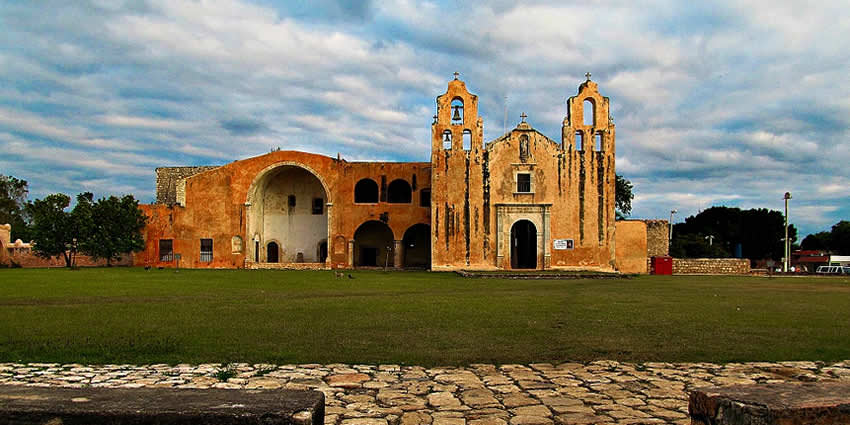 Maní is a small city in Maní Municipality in the central region of the Yucatán Peninsula, in the Mexican state of Yucatán. It is about 100 km to the south-south-east of Mérida, Yucatán.

A picturesque center is full of stories and legends. Walking through the streets of Maní, you can find buildings with unique façades, squares, and chapels (St. Lucia and Santiago).

The population is currently around 4000, similar now to the estimated 4500 in the 16th century.

The area around Maní is largely devoted to agriculture, principally henequen, maize, cattle, and fruit.
Hammocks are made in the city.

Maní has been continuously occupied for approximately 4000 years. In the postclassic Mesoamerican era it was home to the Tutul-Xiu Maya dynasty, which moved their capital here from Uxmal in the 13th century. The Xiu was the dominant power in the western Yucatán after the fall of Mayapan in 1441. Maní served as the main religious center in honor of the deity Kukulcan (Cukulcan, Topiltzin Quetzalcoatl) for the Maya with an annual chic kaban festival until 1341.

With the arrival of the Spanish the Xiu of Maní allied themselves with the Spanish and assisted in the conquest of the rest of the peninsula.

One of the most tragic moments in the history of the Maya took place in Maní: the burning of codices with explanations of history and astronomy, as well as of idols and religious symbols. This event, known as “Auto (or Act) of Faith,” led by Franciscan friar Diego de Landa as part of his efforts to convert the polytheistic Maya people to Catholic beliefs.

On July 12, 1562, Friar Diego de Landa, who held the office of inquisitor before the Monastery of San Miguel Arcángel, held an auto de fe Inquisitional ceremony in Maní, burning a number of Maya hieroglyphic books and a reported 5000 idols, saying that they were “works of the devil”.

The number of books burned is disputed. Landa claimed only burning 27. This act and numerous incidents of torture at the monastery were used to speed the mass adoption of Roman Catholicism throughout the region.

Landa’s burning of these sacred books with Mayan writing and the subsequent reaction was described by him as follows:

We found a large number of books in these characters and, as they contained nothing in which were not to be seen as superstition and lies of the devil, we burned them all, which they (the Maya) regretted to an amazing degree, and which caused them much affliction.

Later Diego de Landa repented and devoted himself to the study of the Maya culture, and in this way was able to rescue a part of the history of the Maya, their way of life, and religious beliefs.

Maní was involved in part of the multi-decade conflict in the Guerra de Castas, the Caste War of the Yucatán. An engraved stone narrates an episode of the event for Maní in 1850.

Church and Convent of San Miguel

The town has an old Franciscan monastery established in 1549, the Parroquia y Exconvento de San Miguel Arcangel. The large building was built using cut stones from many of the Pre-Columbian structures of Maní.

Like other buildings constructed at the time, stones from Maya buildings were used for its construction. During its more than four centuries of existence, it has been restored on several occasions, which has allowed it to be admired right up to the present day.

Inside, the apse vault has some early colonial era fresco murals. The nave interior houses three Baroque carved altars with statues of saints and images.

Restoration work on the monastery building and its artwork began in 2001.

Currently, it continues to operate as a place of Catholic worship for masses and celebrations. The visitation schedule depends on religious services; it’s usually open from 07:00 to 13:00 and from 17:00 to 19:00.

Outside there is a stone statue of the Archangel Saint Michael, a saint to whom the temple is dedicated.

A large open chapel is on the north side with the two bell gables on the church facade. Its one of the largest open chapels in Latin America.