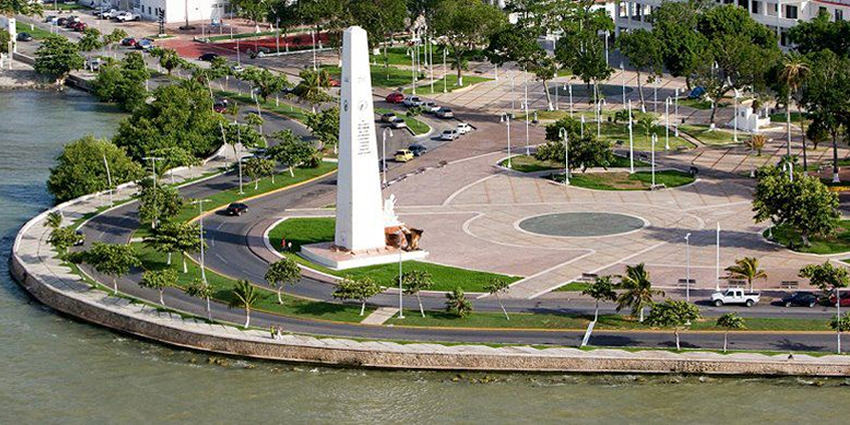 Chetumal is a city on the east coast of the Yucatán Peninsula in Mexico. It is the capital of the state of Quintana Roo and the municipal seat of the Municipality of Othón P. Blanco. In 2010 it had a population of 151,243 people.

Chetumal is an important port for the region and operates as Mexico’s main trading gateway with the neighboring country of Belize. Goods are transported via a road connecting Chetumal with Belize City to the south, and also via coastal merchant ships.

A “filthy bar buried deep in the most depraved slum of Chetumal, Mexico” is the starting locale for a 1950s styled men’s adventure story published in Modern Drunkard magazine.

As Capital of the state, Chetumal receives a good share of the foreign currencies brought in by the considerable floating population composed of European, Asian and other North American tourists.

Chetumal is a growing city with an international airport.
There is also a commercial airport.

The city is situated on the western side of Chetumal Bay, near the mouth of the Río Hondo.

Because of its location on the Caribbean coastline, it is vulnerable to tropical cyclones; Hurricane Janet and Hurricane Dean, both Category 5 storms, made landfall near Chetumal in 1955 and 2007 respectively.

In Pre-Columbian times, a city called Chactemal (sometimes rendered as “Chetumal” in early European sources), probably today’s Santa Rita in Belize, was the capital of a Maya state of the same name that roughly controlled the southern quarter of modern Quintana Roo and the northeast portion of Belize. This original Chetumal is now believed to have been on the other side of the Río Hondo, in modern Belize, not at the site of modern Chetumal.

During the Spanish conquest of Yucatán, the Maya state of Chetumal fought off several Spanish expeditions before finally being subjugated in the late 16th century.

The 1840s revolt of the indigenous Maya peoples against Mexican rule, known as the Caste War of Yucatán, drove all the Hispanic people from this region; many settled in British Honduras (modern Belize).

The current site of Chetumal was established as a Mexican port town in 1898, originally under the name Payo Obispo. The name was officially changed to Chetumal in 1936.

Two hurricanes in the 1940s leveled the entire town; Chetumal was devastated a third time in 1955 by Hurricane Janet. After this, the town was rebuilt with more solid construction, with concrete blocks replacing wood as the usual material.

The population of Chetumal was small (about 5,000 in 1950) until the construction of highways linking it to the rest of Mexico in the 1960s and 1970s; the city then boomed with substantial migration from other parts of Mexico.

The city has a Museum of Maya Culture as well as a zoo, the Payo Obispo Zoo, which belongs to the children of Quintana Roo.

Chetumal’s economy has been influenced by its proximity to the border with Belize. A goods and services tax-free zone (Corozal Free Zone) established on the Belizean side attracts many visitors to Chetumal and also provides a ready market for Chetumal’s retailers and traders.

The city has a music school which offers lessons of various instruments as well as music theory and history. The school is the main music school of the state and is the home of the Junior symphonic orchestra of the state Quintana Roo (“Orquesta sinfonica juvenil del estado de Quintana Roo”) which is directed by Silvia Alcantara Chavero.

The city houses two theaters. The “Teatro Minerva”, which is an open-air theater and belongs to the state’s music school, and the “Teatro Constituyentes”, which is a private-owned theater.

There is a Country club, which features tennis, football and basketball courts, a gym, a swimming pool, a steam-bath and a lounge for parties.

In the early 1990s, the University of Quintana Roo was established at Chetumal, providing training and advanced tertiary degrees over a range of subjects.

Monument to the Flag (Monumento a la Bandera), the first monument built in Chetumal. It consists of a white obelisk that has a clock dial on each of its faces.
Cradles of the Meztizaje (Monumento Cuna del Meztizaje), constructed in the entrance of Chetumal. It has the form of a Mayan pyramid on which are the statues of Gonzalo Guerrero, his wife Zazil Há and the children of both.
Andrés Quintana Roo Memorial, dedicated to Andrés Quintana Roo, whom the state was named after.
Monument to the Fishermen, one of the most recent, located in the Bay of Chetumal.

One day tours from Chetumal

Chetumal is a perfect city to stay there for a while exploring the surrounding areas in daily tours on your own or guided ones.

For more information about all these suggested places to visit and how to get there, use the search form on our website or related tags.