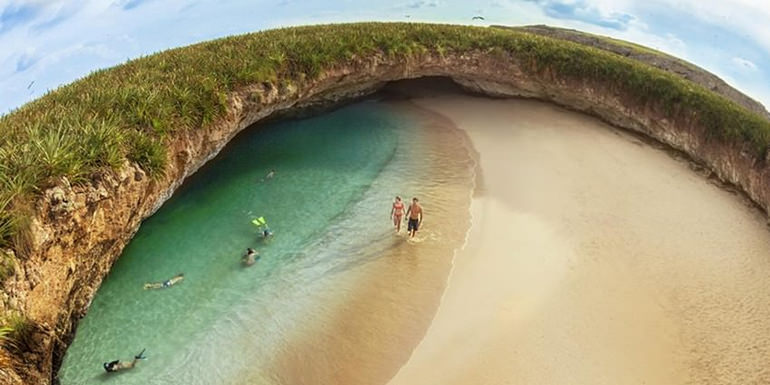 The Marieta Islands (“Islas Marietas”) are a group of small uninhabited islands a few miles off the coast of the state of Nayarit, Mexico, in federal waters 7.9 kilometers southwest of the peninsula known as Punta de Mita, in the municipality of Bahía de Banderas.

They are very popular tourist destinations because of the abundant marine life populations due to the islands being protected from fishing and hunting by the Mexican government. The depth around the islands is between 70 and 110 feet.

The Marietas Islands were originally formed many thousands of years ago by volcanic activity, and are completely uninhabited.

The islands are about an hour-long boat ride west-northwest from the coast of Puerto Vallarta and are visited daily by hundreds of tourists, yet no one can legally set foot on the islands.

In the early 1900s, the Mexican government began conducting military testing on the islands because no one lived there. Many bombings and large explosions took place on the islands causing caves and rock formations to be created.

After a massive international outcry, started by scientist Jacques Cousteau in the late 1960s, the government eventually decided to label the islands a national park and therefore protected against any fishing, hunting, or human activity.

Situated in a sort of open sun-drenched crater, this beach is affectionately nicknamed the “hidden beach” or “beach of love” (Playa del Amor), it is accessible only when the tide is low.

The Islands are home to 44 different species of plants and wildlife. This has led to the inclusion of National Park in RAMSAR sites its designation as a UNESCO MAB Biosphere Reserve.

Many species of seabirds use the location as feeding and breeding grounds, these include blue-footed boobies as well as the red-billed tropicbirds.

It also has many different varieties of coral, which, in turn, is home to a large variety of reef fish species. The island ecosystem is also home to dolphins, Manta Rays, and a number of tropical fish. Eels and many species of sea turtles are also found in the reefs and the many caves that dot the site.

During the winter months, humpback whales arrive at the islands and can be observed all through winter.

Protection by the government has created an environment conducive to the development of the marine ecosystem and is a popular location for snorkeling and scuba diving.

Not even during whale watching tours, people often report seeing sea turtles, manta rays, octopus, wild dolphins, humpback whales, and thousands of species of tropical fish around the islands. The islands are also home to a few thousand birds, with species such as the blue-footed booby.

Currently, the Mexican government allows only a few companies to go to the islands and allows the landing of passengers onto one secluded beach with the necessary permit from SEMARNAT.

From Punta de Mita, small boats do tours through the islands to see the wildlife of this region. From December to March gray and humpback whales can be observed that come from Alaska to give birth off the coast of Nayarit.

It has been estimated in studies carried out at the University of Guadalajara that the so-called “hidden beach” or the “love beach” can accommodate up to 116 visitors a day without degrading.

The carrying capacity of the entire park is 625 visitors a day. (These studies used the antiquated system of Tourism carrying capacity to estimate visitors). However, the actual number of visitors is typically three of four times this limit with more than 2500 visitors landing on it each day during 2016.

During the Easter holidays, more than 250 boats landed on the island per day, some of them carrying as many as 400 tourists. This has been due to recent interest in the Island.

In May 2016, the National Commission of Protected Natural Areas, the national environmental authority in Mexico announced that the Islands and their beaches shall be closed to the general public from May 9.

There have been several reasons presented for this closure, although all of them stem from the increased number of tourists visiting the site. One of the main reasons for the closure is that the coral in the area is being destroyed.

The cause of coral destruction is thought to be a combination of global warming, the presence of boat oil in the water due to excessive tour trips, and physical destruction due to the dropping of anchors up to 250 times a day.

The structure of the Islands and the famous beach is composed of two types of volcanic rocks. The interior is made up of “explosive rocks” which erode quickly and the exterior “shell” is made up of a more resilient form of rock which can withstand erosion to a greater degree.

This does not mean that the island is not susceptible to erosion. According to various studies carried out in 2014 it has been estimated that the Island only has a few thousand more years before it will erode away. However, the rate of erosion is being accelerated by human impact and according to officials, “Excessive tourism could lead to a more rapid destruction of this sanctuary.”

The Mexican authorities have outlined several plans to undo the damage done to the beaches and the islands. These will focus not only on repairing the damage already caused by human hands but will also focus on mitigating any further human interference in the ecosystem.

The first part of the plan is to “replant” the coral in order to compensate for the coral that has been destroyed. This is done by attaching new coral to the already existing coral and letting it grow for 3 to 4 months. Another major effort focuses on limiting the damaging human impact on the sanctuary when the islands reopen for the general public and tourists.

According to the National Commission of Natural Protected Areas (CONANP) after the Islands have been reopened for tourism tourist overload may be mitigated by placing a special floating dock in the bay area which will limit the ships that arrive. another measure under consideration is to place buoys around the fragile ecosystem in order to control the number of visitors that are arriving.

A gaping hole in the surface of the lush green island opens onto a secret beach, with ample shade, sun, and crystal-clear water.

Playa del Amor, more commonly known as the Hidden Beach, is a feature of one of the Marieta Islands – a group of small uninhabited islands a few miles off the coast of Mexico. They are very popular tourist destinations because of the abundant marine life populations due to the islands being protected from fishing and hunting by the Mexican government. The depth around the islands is between 70 and 110 feet.

Situated in a sort of open sun-drenched crater, this beach is affectionately nicknamed the “hidden beach” or “beach of love” (Playa del Amor), it is accessible only when the tide is low.
The famous beach looks like something out of a fantasy novel: a wide, sandy cavern with the blue waters of the Pacific rushing in. The islands are an archipelago, a chain of land formations formed by underwater volcano eruptions. They themselves are natural wonders, but it was something other than volcanic activity that brought the burrowed beach to light.

The Marietas Islands were originally formed many thousands of years ago by volcanic activity, and are completely uninhabited. The islands are about an hour-long boat ride west-northwest from the coast of Puerto Vallarta and are visited daily by hundreds of tourists, yet no one can legally set foot on the islands.

It is rumored that the hole that created the Hidden Beach was a result of deliberate bombings. The Marieta Islands have always been completely uninhabited, making them ideal sites for military testing by the Mexican government. Beginning in the early 1900s, weapons and artillery were tested on the Marieta Islands, a safe distance from Mexican citizens but not so safe for Marieta’s topography. Test bombs are the known cause for many caves and rock formations on the island, possibly including the Hidden Beach. Many bombings and large explosions took place on the islands causing amazing caves and rock formations to be created.

In the 1960s, scientist Jacques Cousteau led a protest against harmful human activity on the islands. In 2005, the islands were finally named a national park, Parque Nacional Islas Marietas, making swimming, kayaking, sunbathing, and other forms of recreation the only activity. Extensive military testing damaged flora and fauna on the island for decades, but many years of peace have replenished the islands’ pristine waters and marine life.

The Hidden Beach is invisible from the outside and is only accessible through a long water tunnel that links the beach to the Pacific Ocean. There are approximately six feet of space above the water level, so visitors can arrive at the beach by swimming or kayaking. The islands remain uninhabited but are frequently visited by tourists who come to enjoy the diverse marine wildlife and the unique tropical Eden of Playa del Amor.