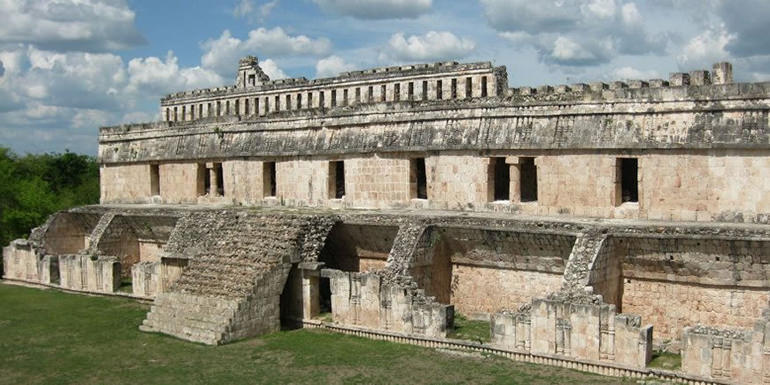 Kabah (also spelled Kabaah, Kabáh, Kahbah and Kaba) is a Maya archaeological site in the Puuc region of western Yucatan, south of Mérida.

Kabah is south of Uxmal, connected to that site by a grand 18 km long raised pedestrian causeway 5 meters wide with monumental arches at each end.

Kabah is the second largest ruin of the Puuc region after Uxmal.

The name “Kabah” or “Kabaah” is usually taken to be archaic Maya language for “strong hand”. This is a pre-Columbian name for the site, mentioned in Maya chronicles.

An alternative name is Kabahaucan or “royal snake in the hand”.

The area was inhabited by the mid 3rd century BCE.

Most of the architecture now visible was built between the 7th century and 11th centuries CE.

A sculpted date on a doorjamb of one of the buildings gives the date 879, probably around the city’s height.

Another inscribed date is one of the latest carved in the Maya Classic style, in 987.

Kabah was abandoned or at least no new ceremonial architecture built for several centuries before the Spanish conquest of Yucatán.

The most famous structure at Kabah is the “Palace of the Masks”, the façade decorated with hundreds of stone masks of the long-nosed rain god Chaac. It is also known as the Codz Poop, meaning “Rolled Matting”, from the pattern of the stone mosaics. This massive repetition of a single set of elements is unusual in Maya art, and here is used to unique effect.

Masks of the rain god abound on other structures throughout the site. Copal incense has been discovered in some of the stone noses of the raingods. The emphasis placed on Chaac, the “Protector of the Harvest”, both here and at other neighboring Puuc sites, stemmed from the scarcity of water in the region. There are no cenotes in this dryer, northern part of the Yucatán, so the Maya here had to depend solely on rain.

The site also has a number of other palaces, low stone buildings, and step-pyramid temples. While most is in the Puuc Maya style, some show Chenes elements. The site had a number of sculpted panels, lintels, and doorjambs, most of which have been removed to museums elsewhere. The sculptures mostly depict the site’s rulers and scenes of warfare.

The first detailed account of the ruin was published by John Lloyd Stephens and Frederick Catherwood in 1843.

The site is on Mexican highway 261, some 140 km south from Mérida, Yucatán, towards Campeche, Campeche, and is a popular tourism destination. Ruins extend for a considerable distance on both sides of the highway; many of the more distant structures are little visited, and some are still overgrown with forest. As of 2003, a program is ongoing to clear and restore more buildings, as well as archeological excavations under the direction of archeologist Ramón Carrasco.

Microbial biofilms have been found degrading stone buildings at Uxmal and Kabah. Phototrophs such as Xenococcus are found more often on interior walls. However stone degrading Gloeocapsa and Synechocystis were also present in large numbers.

Kabah was declared a Yucatán state park in 1993.