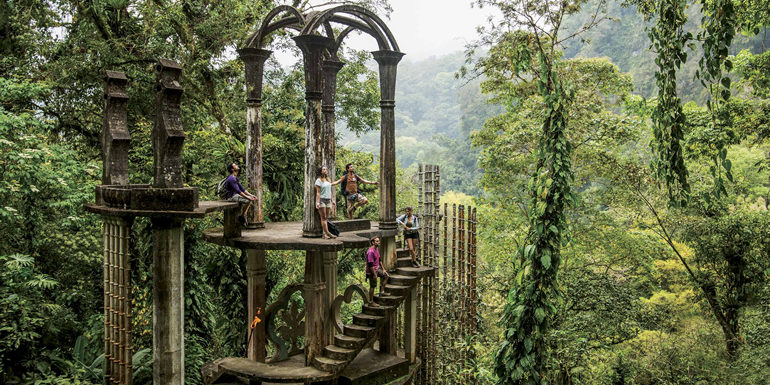 Xilitla is a municipality and town in the state of San Luis Potosí, in the Huasteca region of Mexico. The municipality has an area of 415 square kilometers and had a population of 51,498 in 2010 of whom 6,576 lived in the town of Xilitla.

Xilitla is known for its fertile mountains and springs which create panoramic landscapes throughout the municipality.

Xilitla is a bustling center and an important meeting point for the people of the surrounding communities.

Xilitla has a wide range of businesses including food, clothing, and shoe stores, restaurants (including the Comedor Popular, La Flor de Café) in addition to a bank, a telephone call center, and an internet café.

The church is the largest structure in the town and is located on one edge of the main plaza. On Sundays, the market day, the town fills with people and energy and welcomes people from surrounding communities who come to buy and sell their agricultural and commercial products.

A local specialty is the “zacahuitl”, a giant tamal wrapped in banana leaves and filled with pork on one side and chicken on the other.

Most of Xilitla’s residents live in over 100 rural villages of several dozen up to several hundred people.

About 30,000 people in Xilitla live in indigenous (Indian) households and about 20,000 of them speak an Indian language, principally Huastec. Most of the speakers of the Indian language also speak Spanish.

Augustine’s missionary activity in the Xilitla area began in 1537 and in 1553 construction began on the St. Augustine Convent.

It was built to serve as both a religious building and a fortress as the Chichimeca war was in progress and one of the hostile Chichimeca tribes, the Pame, lived to the northwest.

The convent was attacked and burned by the Indians in 1569 and 1587 and largely abandoned by the Augustines. In the 17th century, the Dominicans made another attempt to evangelize but were unable to overcome the hostility of the Indians.

Finally, in the mid-18th century, Fray Junípero Serra and the Franciscans succeeded in establishing a permanent missionary presence in the region.

The economy is primarily agricultural with the main crops being coffee and citrus. A coffee fair is held in August.

The town of Xilitla has an elevation of 676 meters and is located on the eastern slopes of the Sierra Gorda mountain range, part of the Sierra Madre Oriental. Narrow valleys in the municipality dip to 400 meters.

There are a number of caves and caverns in Xilitla, as well as many natural springs. Parakeet Cave, a short walk from the town, is home to a large number of green parrots which leave and re-enter the cave at dawn and dusk every day.

The land is largely sedimentary rock with striations visible on cliffs and roads.

Receiving more than 2,500 mm of precipitation annually, Xilitla is one of the most humid areas of Mexico.

Rainfall is seasonal, with maximum precipitation coming in summer, but winters are not as dry as in many parts of Mexico.

The climatic classification for Xilitla is subtropical.

Xilitla’s altitude moderates the tropical (A) climates of nearby areas at lower altitudes.

The natural beauty of Xilitla inspired eccentric English artist Edward James to create Las Pozas (“the Pools”), a garden in a subtropical rainforest just outside the town of Xilitla.

It includes more than 32 ha of natural waterfalls and pools interspersed with towering surrealist sculptures in concrete. James’ objective was to create a “Garden of Eden” at Las Pozas.

A foundation now owns and operates Las Pozas which is open to the public. Edward James’ house, near the center of Xilitla, is known as El Castillo and is now a hotel.

The highway to the southwest winds around tight curves through the mountains to Querétaro and Mexico City. Heading northeast from town, the highway winds 10 km to La Y Griega, a large T-intersection into highway 85.