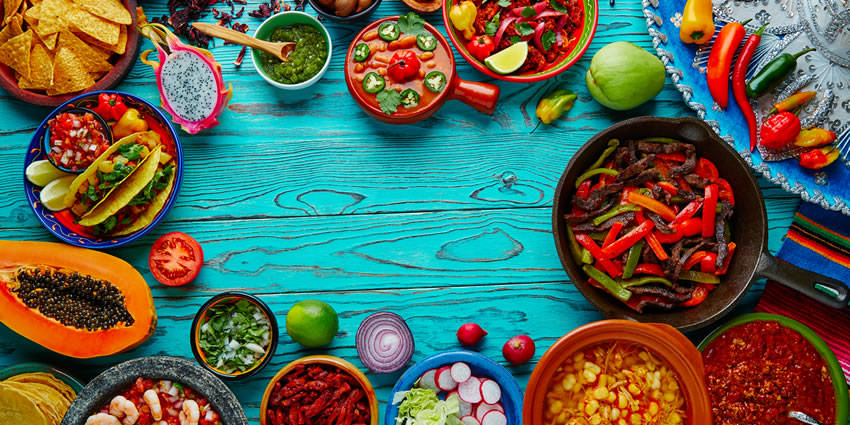 The typical Mexican food is a long and diverse history. It is believed that authentic Mexican food might have been derived from the Mayan.

In the middle of the 14 century, the Aztec Empire became thriving, and though the Mayan food staples were still widespread, chili peppers, honey, salt and chocolate also found its way into their cooking. Some of the wild game, such as turkey and duck, became domesticated.

In 1521 Spain invaded Mexico. Spanish foods had the most influence on Mexican cuisine. They introduced new livestock, such as sheep, pigs and cows. They brought with them dairy products, and garlic as well as many different herbs, wheat and spices.

It was at this time that the Mexicans saw the assimilation of many other cuisines including Caribbean, South American, French, West African and Portuguese. Because of this Mexican foods, today are diverse, yet dishes to vary from region to region.

Cooking methods, past and present

The early natives of Mexico did not have ovens, instead, they heated food over and open fire, using cast iron skillets and ceramic ware. Frying on fire was also a popular method.

Another method was steaming. They would suspend meat wrapped in cactus or banana leaves, over boiling water in a deep pit.

They used a metate y mano, which is a large tool made of lava rock or stone that they would use as a grinding stone or the molcajete, which was smaller, to grind and smash ingredients. The molcajete, or mortar and pestle, is a small bowl-shaped container that can be made of stone, pottery, hardwood or marble, and the pestle is baseball bat-shaped.

A brief history of some of Mexican foods

Salsa was sold in the Aztec market places. Salsa, the Spanish word for sauce, is uncooked and sometimes pureed until chunky, smooth, or chopped. Large red tomatoes, tomatillo, chipotle and the avocado are found in the modern salsa and are the same core ingredients used in the past.

We can thank the Aztecs for Chocolate. It was through them that the Spaniards brought the product to Europe in 1657.

The term enchilada is first referenced in the US in 1885. Yet the concept of tortillas being used as a wrap can be clearly linked to the Aztecs.

The tomatillo is a fruit that dates back to at least 800 BC, the word meaning round and plump. The Aztecs domesticated it, and when the Europeans came to Mexico, they documented the local foods and often confused the names by shortening the words. Tomatillo provides tart flavor in many different green sauces.

Thought the earliest mention of the chili pepper plants was in 1542, and for Europe, the history of the pepper began in the late 15th century, here is archaeological evidence that peppers were in use since 5000 BC.

Pre-Columbus is how far back the tamale can be traced. It is documented that the Spaniards were served tamales by the Aztecs in the 1550s.

Flavors from around the world have influenced Mexican dishes. The same can be said about Mexican traditional favorites affecting other countries’ menus. In just about every culture you look at, you can find a hint of Mexico.