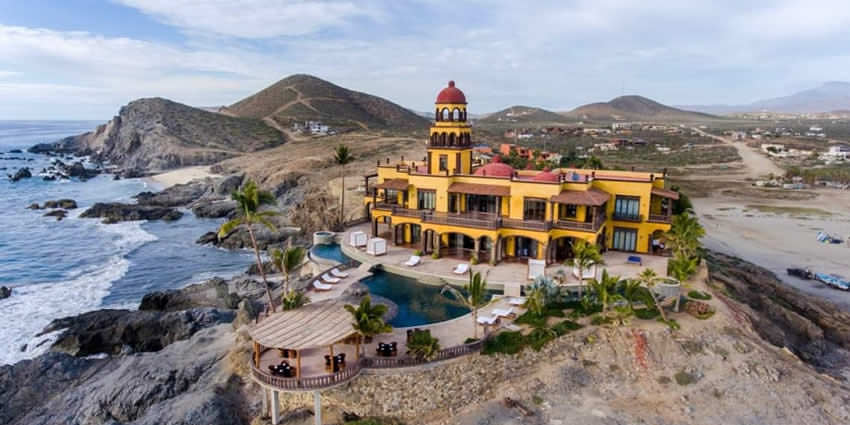 Todos Santos is a small coastal town in the foothills of the Sierra de la Laguna Mountains, on the Pacific coast side of the Baja California Peninsula, about an hour’s drive north of Cabo San Lucas and an hour’s drive southwest of La Paz.

Because of its temperate climate, the town is also known as “Cuernavaca of the State of Baja California Sur”.

There is evidence that demonstrates the human presence in Todos Santos for at least 3000 years.

The first European to discover the oasis was the Jesuit Jaime Bravo, who observed that there were nomadic tribes of guaycuras that took advantage of the water and collected shells from the coast.

The mission at what is now Todos Santos, Misión Santa Rosa de las Palmas was founded by father Jaime Bravo in 1723. In 1724 it was renamed Nuestra Señora del Pilar de La Paz.

Located across the street to the southwest from the small town plaza, this mission contains the statue of the Virgin of Pilar, which is the focus of Todos Santos’s main festival in November.

The site was originally a station established in 1724 by the Jesuit subordinate to the mission of Our Lady of the Pillar of Peace that supplied water and fruits and vegetables to La Paz.

In 1725 the priest Lorenzo Carranco was permanently established throughout that year.

Father Jaime Bravo established three visits in this area, however, it has never been possible to establish with certainty where the other two were.

During the Mexican American War the Skirmish of Todos Santos, the last battle of the war, was fought near the town on March 30, 1848.

During the 19th century following the secularization of the missions, Todos Santos thrived as the Baja sugarcane capital, supporting eight sugar mills at the end of the 19th Century.

Only one existed by the time the town’s freshwater spring dried up in 1950 and that last mill closed in 1965.

Todos Santos faced a bleak future until the spring came back to life in 1981 and the Mexican Government paved Highway 19 in the mid-1980s. The highway brought tourists and the rich farmlands have been revived.

The town now prospers from farming vegetables, chilies, avocados, papayas, and mangoes; as well as from fishing and ranching.

More recently, there has been a gradual increase in tourist activity and a boom in real estate development.

Handicraft shops, owner-operated art galleries featuring landscape paintings of local scenes (some artists from Guadalajara and other parts of Mexico also exhibit works in Todos Santos,) upscale restaurants, boutique hotels, and restored colonial buildings have contributed to the gentrification and redevelopment of the town.

There are a few annual festivals including the Festival de Cine and the Todos Santos Music Festival.

The Hotel California is a favorite stop because of the name associated with the song made famous by the Eagles, even though the song does not specifically reference this particular hotel, nor any other existing hotel.

On May 1, 2017, the band The Eagles, filed a lawsuit against the Hotel California alleging trademark infringement.

The Eagles were seeking relief and damages.

The lawsuit was settled in 2018: The hotel continues to use the name, abandoned efforts to apply for a trademark in the United States, and now expressly denies any connection with the song or the Eagles.

There are many beautiful beaches within a 15-minute drive of Todos Santos. However, some of the area’s beaches, with rip tides, undertows, and fairly steep drop-offs close to shore, are not considered safe for swimming.

There are many accommodations both at San Pedrito and at Cerritos beach.

The mission Nuestra Señora del Pilar de La Paz contains the statue of the Virgin of Pilar, which is the focus of Todos Santos’s main festival in November.