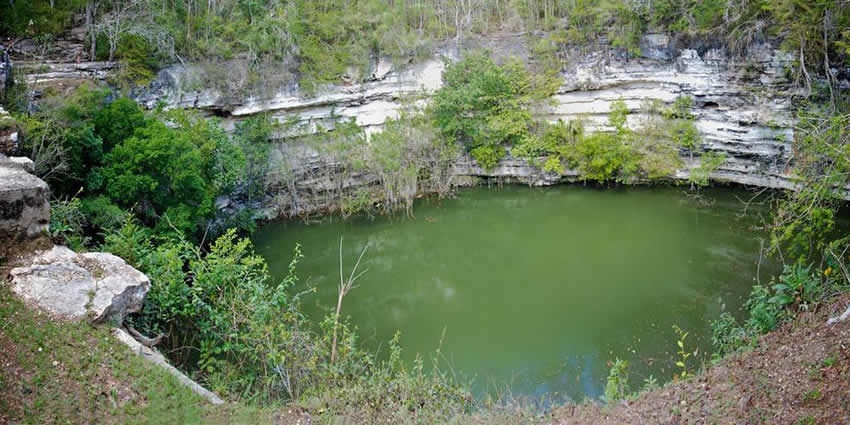 A cenote is a natural pit, or sinkhole, resulting from the collapse of limestone bedrock that exposes groundwater underneath. Especially associated with the Yucatán Peninsula of Mexico, cenotes were sometimes used by the ancient Maya for sacrificial offerings.

The term derives from a word used by the low-land Yucatec Maya “ts’onot” to refer to any location with accessible groundwater.

While the best-known cenotes are large open water pools measuring tens of meters in diameter, such as those at Chichén Itzá in Mexico, the greatest number of cenotes are smaller sheltered sites and do not necessarily have any surface exposed water.

There are over 6000 different cenotes in the Yucatan Peninsula in Mexico. Cenote water is often very clear, as the water comes from rain water filtering slowly through the ground, and therefore contains very little suspended particulate matter.

The groundwater flow rate within a cenote may be very slow. In many cases, cenotes are areas where sections of cave roof have collapsed revealing an underlying cave system, and the water flow rates may be much faster: up to 10 kilometers per day.

In the north and northwest of the Yucatán Peninsula in Mexico, the cenotes generally overlie vertically extensive voids penetrating 50 to 100 m below the modern water table.

However, very few of these cenotes appear to be connected with horizontally extensive underground river systems, with water flow through them being more likely dominated by aquifer matrix and fracture flows.

In contrast, the cenotes along the Caribbean coast of the Yucatán Peninsula (within the state of Quintana Roo) often provide access to extensive underwater cave systems, such as Sistema Ox Bel Ha, Sistema Sac Actun/Sistema Nohoch Nah Chich, and Sistema Dos Ojos.

The whole aquifer is therefore an anchialine system (one that is land-locked but connected to an ocean). Where a cenote, or the flooded cave to which it is an opening, provides deep enough access into the aquifer, the interface between the fresh and saline water may be reached.

The depth of the halocline is a function of several factors: climate and specifically how much meteoric water recharges the aquifer, hydraulic conductivity of the host rock, distribution and connectivity of existing cave systems and how effective these are at draining water to the coast, and the distance from the coast.

Flora and fauna are generally scarcer than in the open ocean, however, marine animals do thrive in caves. In caverns, one can spot mojarras, Mollis, guppies, catfish, small eels, and frogs.

In the most secluded and darker cenotes, the fauna has evolved special features to live in an environment deprived of natural light.

For example, many animals don’t have pigmentation and they are often blind, so they are equipped with long feelers so that they can find food and make their way around in the dark.

Although cenotes are found widely throughout much of the Yucatán Peninsula, a higher-density circular alignment of cenotes overlies the measured rim of the Chicxulub Crater.

This crater structure, identified from the alignment of cenotes, but also subsequently mapped using geophysical methods (including gravity mapping) and also drilled into with core recovery, has been dated to the boundary between the Cretaceous (K) and Paleogene (Pg) periods, 66 million years ago.

In 2001–2002 expeditions led by Arturo H. González and Carmen Rojas Sandoval in the Yucatan discovered three human skeletons; one of them, Eve of Naharon, was carbon-dated to be 13,600 years old.

At a depth of 57 m, the divers located the remains of a mastodon and a human skull (at 43 m) that might be the oldest evidence of human habitation in the region.

The Yucatán Peninsula has almost no rivers and only a few lakes, and those are often marshy. The widely distributed cenotes are the only perennial source of potable water and have long been the principal source of water in much of the region.

Major Maya settlements required access to adequate water supplies, and therefore cities, including the famous Chichén Itzá, were built around these natural wells. Some cenotes like the Sacred Cenote in Chichén Itzá played an important role in Maya rites.

Believing that these pools were gateways to the afterlife, the Maya sometimes threw valuable items into them.

The discovery of golden sacrificial artifacts in some cenotes led to the archaeological exploration of most cenotes in the first part of the 20th century. Edward Herbert Thompson (1857–1935), an American diplomat who had bought the Chichén Itzá site, began dredging the Sacred Cenote there in 1904.

He discovered human skeletons and sacrificial objects confirming a local legend, the Cult of the Cenote, involving human sacrifice to the rain god Chaac by the ritual casting of victims and objects into the cenote.

The remains of this cultural heritage are protected by the UNESCO Convention on the Protection of the Underwater Cultural Heritage.

Cenotes have attracted cavern and cave divers, and there are organized efforts to explore and map these underwater systems. They are public or private and sometimes considered “National Natural Parks”. Great care should be taken to avoid spoiling this fragile ecosystem when diving.

In Mexico, the Quintana Roo Speleological Survey maintains a list of the longest and deepest water-filled and dry caves within the state boundaries. When cavern diving, one must be able to see natural light the entire time that one is exploring the cavern (e.g. Kukulkan cenote near Tulum, Mexico).

During a cave dive, one passes the point where daylight can penetrate and one follows a safety guideline to exit the cave. Things change quite dramatically once moving from a cavern dive into a cave dive.

Too many divers, even experienced ones, have died for ignoring safety recommendations.

The cenotes are usually filled with rather cool fresh water. Cenote divers must be wary of the possible halocline, this produces a blurred vision until they reach a more homogeneous area.