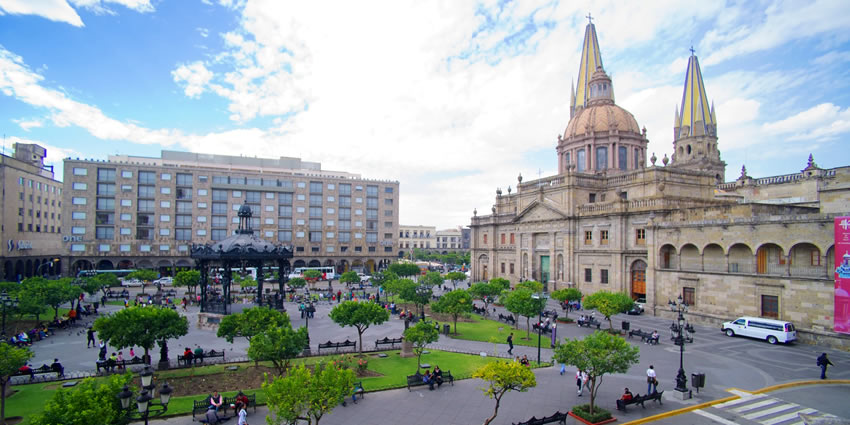 Are you wondering whether you should visit Guadalajara?

Located in the west-central part of the country in the state of Jalisco, the beautiful Colonial city of Guadalajara sits on a high plateau more than 5,000 feet above sea level.

Guadalajara is made up of 3 towns – Guadalajara, Tlaquepaque and Zapopan. For great shopping and unique souvenirs head to Tlaquepaque.

Guadalajara is well-known as a city of tequila and mariachi. You must head to Plaza de Los Mariachis in the evening for the mariachi bands, it is quite an experience.

What to see in Guadalajara?

The city was founded in 1542 by the Spanish conquistador, Nuno de Guzmán. Even today, the downtown area of Guadalajara is filled with charming Colonial buildings dating from the 1600s.

Guadalajara is a 450-year-old city of 5 million people with so much culture and sophistication.

The museums, art centers, the Degollado Theater, the beautiful city parks, churches, and exciting markets will fill your days with sights and sounds of Mexico that you will never forget!

Guadalajara is a colonial city of incredible architecture with lots to see and do.

The Roman Catholic Cathedral certainly has a history.

Visit Guadalajara on a Sunday. Join the locals in the morning on Avenidas Vallarta and Juarez where you can cycle or walk.

There is street theatre lining the streets and there is a vibrant buzz all around.

Street Vibe and Shopping in Guadalajara

This is the colonial home of the Conqueror Juan de Saldivar which dates back to 1589.

The colonial home was also used as the Headquarters of the Spanish Inquisition. The alley where is it located is known as the Rincon del Diablo translated means the Devil’s Nook.

Legend states that supernatural encounters and deaths have taken place in the home.

Visit the Plazas of Guadalajara

Plaza Tapatia has many statues and interesting shops to view as you wander down its vast length where at the far end lies Instituto Cultural Cabanas.

The Instituto Cultural Cabanas was originally a hospice that provided care for invalids, handicapped people, old people, and orphans at the beginning of the 19th century.

The chapel contains murals of the famous Jose Clemente Orozco. It was designated a UNESCO World Heritage Site in 1997.

In the North section of Plaza de Liberacion, you will find the statue dedicated to Don Miguel Hidalgo y Costill who signed the Mexican Declaration of Independence in the Governor’s Office.

The Rotonda is a mausoleum containing the ashes of 98 men and women who were important to the city and who were born locally in the state of Jalisco.  The remains are of scientists, writers, artists, and educators. The Rotonda was built in 1952.

The bronze sculpture commemorates the city’s founders and was created by Rafael Zamarripa.

The Murals are by Jose Clemente Orozco.  The building has a section on the history of Jalisco.

The original building collapsed during an earthquake in 1750 and it was subsequently rebuilt in the baroque style.

Intrigued about how Tequila is made?

You can book a 6-hour Tequila tasting tour that includes a visit to the famous Jose Cuervo Distillery.

Taste the tequilas of Mexico on a 6-hour tasting tour from Guadalajara. Explore Mexico’s renowned tequila-producing region of Jalisco and stop for tequila tastings at one of the most famous tequila distilleries in the world, Jose Cuervo Distillery.

Local transportation & How to get around in guadalajara

You can travel with ADO and Primera Plus throughout Mexico – they were comfortable, on time, safe and reliable.

Accommodation: Where to stay in Guadalajara?

Guadalajara has a range of accommodations from Airbnb to small boutique hotels and larger chain hotels.

Guadalajara Airport (GDL) is located 16 km south of the city center. It is serviced by international and domestic carriers.

Find the cheapest flights when researching and booking flights around Mexico.

There are buses and taxis available at the airport.

Car rental is available at the Airport and Downtown.