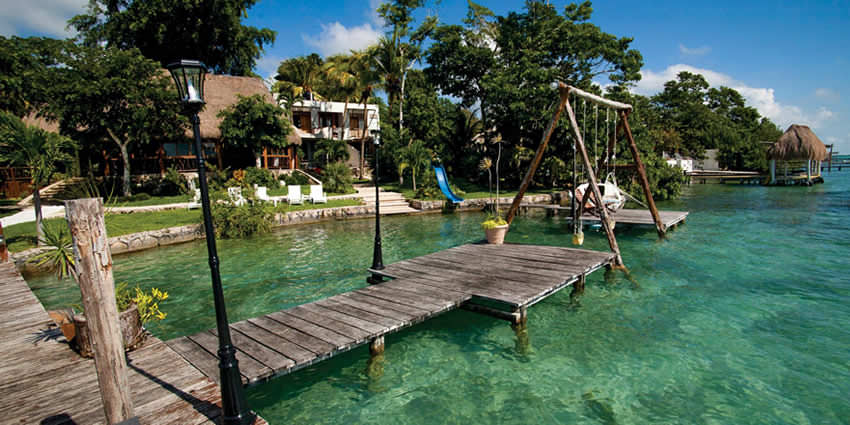 Bacalar is the municipal seat and largest city in Bacalar Municipality (until 2011 a part of Othón P. Blanco Municipality) in the Mexican state of Quintana Roo, about 40 kilometres (25 mi) north of Chetumal.

In the 2010 census the city had a population of 11,084 people. At that time it was still a part of Othón P. Blanco, and was its second-largest city (locality), after Chetumal.

Bacalar is also the name of the lagoon, Bacalar lagoon on the east side of the town.

The name most likely derives from Mayan: b’ak halal, meaning “surrounded by reeds”, the name of the locality attested at the time of the 16th century arrival of the Spanish.

The place was inhabited by Mayans for centuries. The name most likely derives from mayan “b’ak halal” and means “surrounded by reeds”. Trails around the lagoon were lined with white seashells because the inhabitants would walk at night when it was cooler and the shells would mark the trails.

Bacalar was a city of the Maya civilization in Pre-Columbian times. This was the first city in the region which the Spanish Conquistadores succeeded in taking and holding in 1543. In 1545 Gaspar Pacheco established the Spanish town here with the name Salamanca de Bacalar. The region of the southern half of what is now Quintana Roo was governed from Bacalar, answerable to the Captain General of Yucatán in Mérida.

The city was invaded and destroyed by pirates in 1642 and rebuilt in 1726. After the pirate attack the Fortress de San Felipe Bacalar was built and was completed in 1733.

In 1848 Bacalar had a population of about 5,000 people. In 1848 during the Caste War of Yucatán rebellious Chan Santa Cruz Maya conquered the town. It was not retaken by the Mexicans until 1902.

The Fortress de San Felipe Bacalar, in the center of town, represents one of the bastions used by the Maya before they were overrun by the Spanish, it has a small but modern museum inside, if you are in town it´s worthwhile visiting.

On Sunday night, there may be music and dancing in the city square.

Things to do in Bacalar

You can try guided kayak/canoe trips, scuba, horse-back riding in the rodeo or on trails to Lake Bacalar, bicycle tours and jungle walks to explore the beautiful lake and its surroundings.

The water of Lagoon Bacalar is among the most pale and gem like blue that could possibly exist.

The main attraction of travelling to this area is the 7 colours Lagoon, whose beauty could easily induce one to sit and read for a few days without regret. The Lagoon (fresh water) is somewhat shallow at the shores, except where there are sinkholes commonly known as cenotes. It is well seen by kayak or sailboat.

The sand when disturbed smells strongly of minerals or sulfur, though sitting by the lagoon or even being on the water certainly carried no odor whatsoever.

Lake Bacalar (or Laguna de Bacalar) is a long and narrow lake. It is approximately 42 km long measured from north to south, and less than 2 km at its widest.

The lake is renowned for its striking blue color and water clarity, partly the result of having a white limestone bottom. Like most bodies of water in the Yucatán peninsula, the lake is fed by underground rivers or cenotes.

Cenote Azul is 4km south of the center of town at the southern tip of Bacalar.
It is open from 7:00 to 18:00 daily.
Cenote Azul is one of the deepest cenotes in the Yucatan at 90 meters or 295 ft.

Canal de los Piratas. This canal linking the river Hondo Laguna Bacalar is known as the Pirates Road because, as you can imagine by its name, this channel was transiting these characters and where they carried out their fearsome battles.

The mayan ruins nearby that are worthwhile visiting are Chacchoben, Dzibanché and Kohunlich. They don´t have a lot of people and the jungle surroundings are magnificent.

From Cancun, via Playa del Carmen and Tulum.
Or take a bus from Chetumal.

There are a lot of buses leaving every half hour more or less, so you just need to make sure with which bus you like to travel.

You can also take a colectivo which are departing from Tulum, Felipe Carrillo Puerto or Chetumal.

On foot or bicycle would be very doable if you are staying in the city of Bacalar, as well as taxis, which are not expensive.